Caroline Wozniacki has, according to Denmark’s Ekstra Bladet newspaper, attracted as much attention for the clothes she has worn as for those she has not.

But the Australian Open defending champion has set a new trend: when she plays her match in the first round tonight, she will wear a dress of plastic.

Wozniacki’s sponsor, Adidas, has, says the biggest selling newspaper in Denmark, “bought” and helped to develop a clothing range made from recycled plastic from the oceans.

The outfit has been created in collaboration with a marine protection organisation called Parley, and it is made of recycled plastic.

“Yes, you can sweat in it. It feels good to wear. This is also made of recycled plastic, Wozniacki said as she gripped her training top.

“I think it is a good idea, because there is a lot of pollution in the seas, and it kills many animals like turtles, fish and what else is in the water.”

“I get sad to see that kind of thing, and it is one of the places where you can make a difference. You may not throw your garbage on the beach or in the water, or you can use bags made of something other than plastic.

“You can do a lot even for the climate, and I think it’s fun that you can make clothes from recycled plastic.

“I think it’s great to play in recycled plastic. It’s fun that you can take a plastic bottle and crush it in tiny pieces and do something else.” 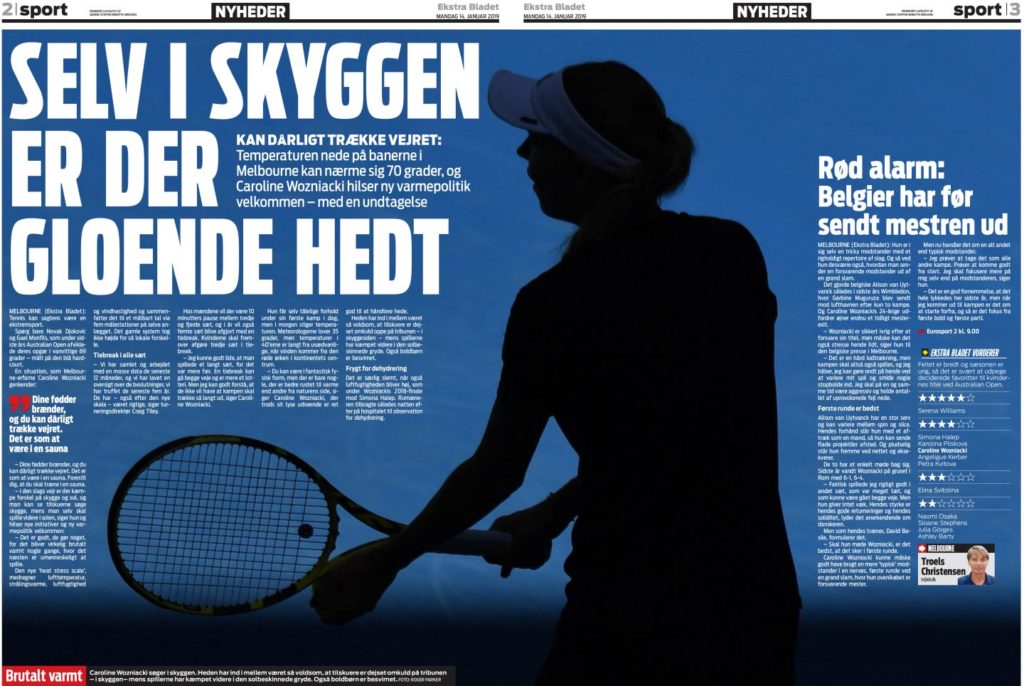 Back to defend her title, she told Troels Christrensen she was really happy to be back in Melbourne.

“It was a great feeling to get into Rod Laver Arena for my first training, she said.

“There are many good memories in there. I’m just comfortable and feel at home on the track.

“It fits well with my game, and it’s great to think back to the two weeks I had last year. It is very special.”

Wozniacki said it was Ok to be a little nervous about having to play, “but at this point I think it doesn’t matter whether you are defending champions or not. Because it’s a grand slam”.

Wozniacki will open the tournament tonight before Roger Federer takes over.

“It is amazing to be with him on the program. He is an icon,” she said.

“It was great that he won the same year as I did. It made it a bit special to stand there with him.”

Wozniacki will meet Belgian Alison Van Uytvanck in the first round.

Wozniacki was there with her father for the training session and was looking forward to the first round session.

“My thoughts are still a little in 2018. That year has gone so fast, and now we are back. I am proud and looking forward to the first match. I am very pleased that Caroline plays it on Rod Laver,” Piotr Wozniacki told Ekstra Bladet.