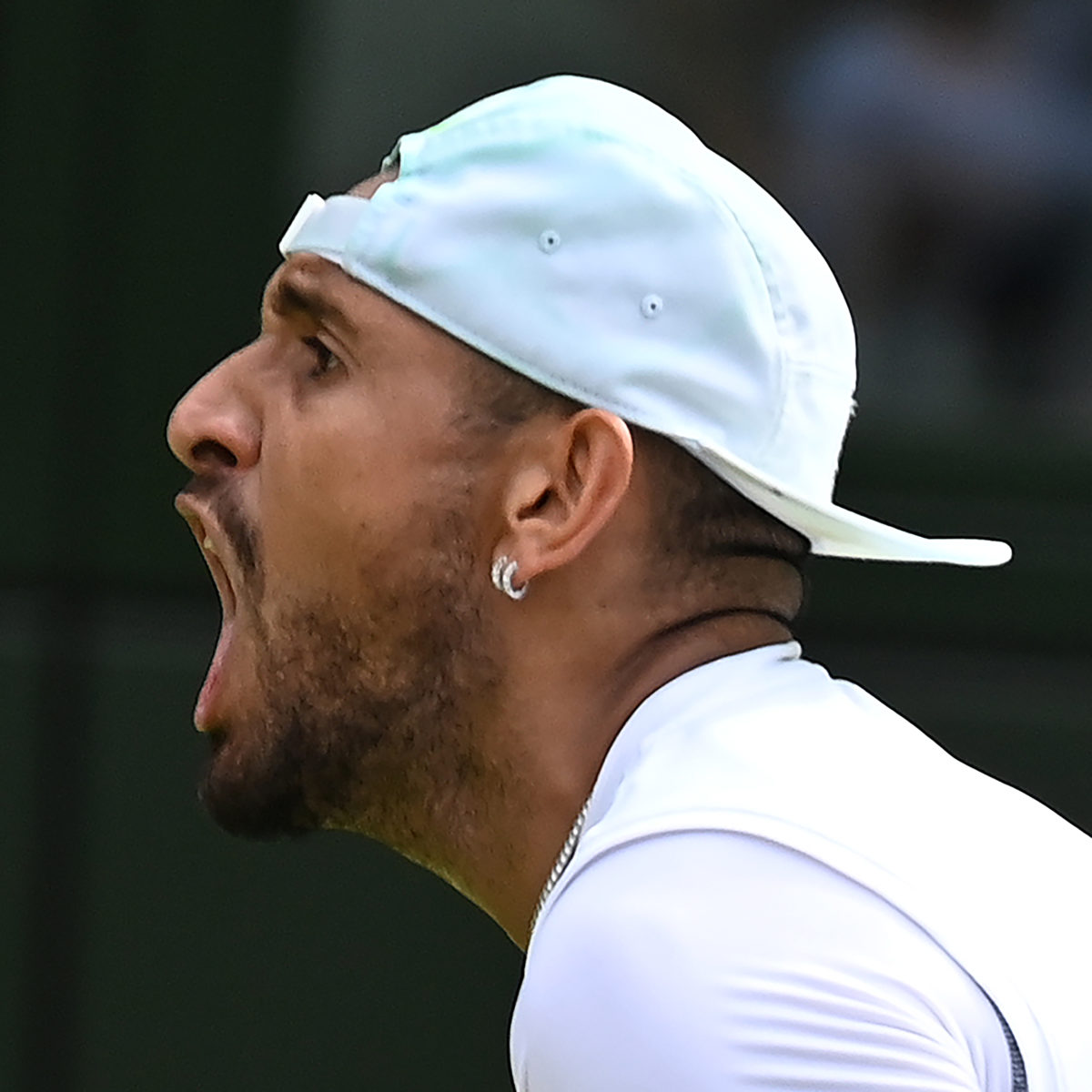 Nick Kyrgios re-lived his best days at Wimbledon on Monday as the volatile Australian reached the quarter-finals for a second time with a fighting 4-6, 6-4, 7-6(2), 3-6, 6-2 defeat of Brandon Nakashima.

The player who thrives on controversy and heart, had to work himself into a winning lather against a 20-year-old American who remained stone-faced as he played on Centre Court for the first time.

Rafael Nadal continued his storming success in his first time back on grass in three years, with the Spaniard dispatching Dutchman Botic van de Zandschulp 6-4, 6-2, 7-6(6).

The second seed was untroubled by an opponent playing at this level of a major for the first time.

He out-aced Nadal 11 to nine but lost serve five times in the match lasting nearly two and a half hours.

“I’m very pleased with my game, I’m happy that the foot (previous injury) is doing so well,” Nadal said,

The 22-time Grand Slam champion has now reached the quarter-finals or better at every Grand Slam(16)  he has played for the past five years.

The winner of the Australian and Paris titles in 2022 now stands a perfect 18-0 at the majors this season.

Nadal was broken for 4-5 in the third set as he tried to wrap up a quick win, but came through with a winning tiebreak to end the day’s play before darkness and the closure of the Centre Court roof.

He will bid for the semi-finals against Taylor Fritz after the American defeated Australian Jason Kubler 6-3, 6-1, 6-4, breaking six times and delivering 16 aces in two hours.

Kyrgios complained of a shoulder problem and had two medical timeouts early on. But his fitness improved along with his game the farther along he got in an effort running to more than three hours

“I knew I’d never lost a five-setter here ,” the No. 40 said after reaching the Wimbledon quarters for the first time since his debut as a teenager in 2014 when he beat Rafael Nadal in the fourth round before losing to Milos Raonic.

“I was not near my best today,” he said 48 hours after beating furth seed Stefanos Tsitsipas in a bad-tempered battle which netted both men thousands  in fines.

“”But I was happy to get through.I fought hard today, it was great stepping out here again. My shoulder was playing up after a lot of tennis, but I steadied the ship.

“My five-set record is pretty strong. I knew I’d been there and done that before. My experience is what got me over the line.”

The 27-year-old said he would require some refreshment later to wind down: “I will need a glass of wine for sure tonight.”

Kyrgios came out somewhat flat and lost the first set to the 56th-ranked Nakashima. But the Australian’s attitude lifted in the second set, profitting from his opponent’s double-fault to break for a 2-1 lead.

Kyrgios began complaining about pain in his right shoulder and was visited by the doctor who gave him painkillers and by a trainer mid-way through the third set for a medical timeout.

With the atmosphere on Centre Court far more subdued than the Court 1 circus against Tsitsipas, Kyrgios appeared to be less than totally inspired.

But he still managed his ninth ace to set up a set point in the second and finished with  serve winner to level at a set each,

The third set stayed on serve out to the tiebreaker, with Kyrgios taking control by unleashing a backhand down the line for four set points.One was enough as the Australian sent a stinging return over for a winner to lead two sets to one.

But Nakashina was not yet done, with the American breaking for 4-3 as Kyrgios ran out of line call challenges during the game. The Australian all but let the set go as the contest entered the deciding fifth.

Kyrgios fired up with a break for 2-1 as his early shoulder problem faded into insignificance and laid on an insurance break for a 4-1 margin.

The Aussie powered into the last eight as he polished off the sixth game with an ace and completed his afternoon on Centre Court as he served-and-volleyed on match point.

Kyrgios will play in the quarter against Cristian Garin.

It is the fourth time Garin has managed the fightback, with his previous three coming in Davis Cup and the US and French Opens over the last two seasons.

De Minaur was one of three Australians in the fourth round, and had won all three matches with Garin – most recently last month at Eastbourne.

Garin has reached the last eight at his fifth Wimbledon and 15th career Grand Slam; he lost both of his June grass preparation matches in Halle and Eastbourne.

The Chilean won seven of the last eight points to wrap up victory in just over four and a half hours, saving two match points in the fifth set.

“It was a battle, I think,” said the player who was to have faced 2021 finalist Matteo Berrettini in the first round before the Italian had to withdraw due to a positive COVID test.

“It was crazy because I knew that Matteo got COVID; I didn’t know he was not playing – it was a big surprise for me.

“He was one of the favourites for the tournament.”