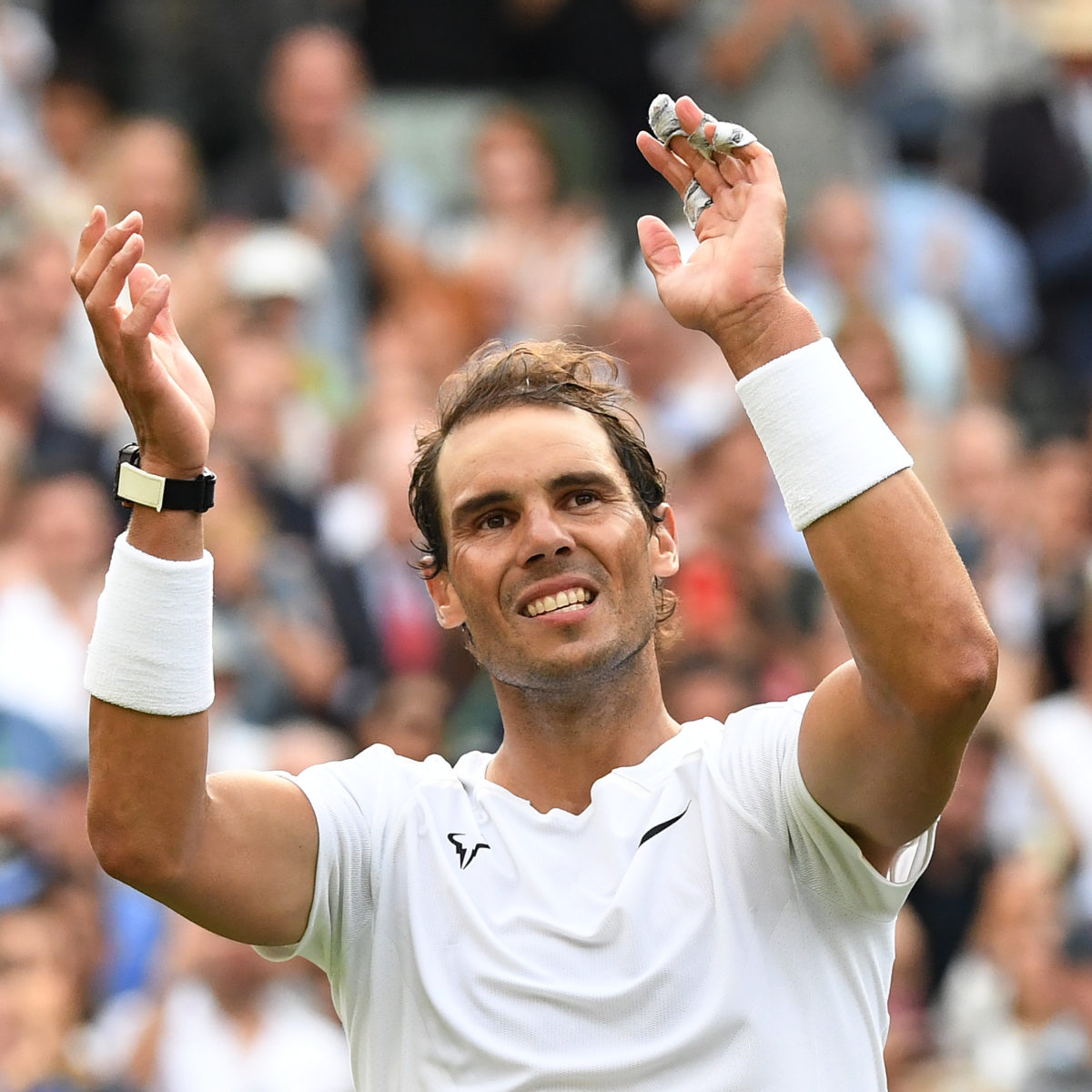 The two-time champion who won his last trophy here a dozen years ago, struggled for four hours, 20 minutes to contain American Taylor Fritz.

Nadal took a medical timeout for his abdominal problem and was once signalled by his father in the player box to give up the fight, according to BBC commentators.

But the 36-year-old soldier on with his goal for adding Wimbledon to his Australian and French Open titles this season remaining strong.

Nadal advanced to the final four as he won the event’s new 10-point tiebreak designed to wrap up lengthy matches.

The winner confirmed post-match that he played through a massive problem.

“I don;t know how I won this, in the abdominal something is not going well, to be honest.

“I need to find a different way to serve.”

Nadal may struggle to be fit enough to play his Friday semi-final against a charged-up Nick Kyrgios.

“Kyrgios? The first thing to worry about is if I will be fit enough to play,” Nadal said.

“Nick is a great player, especially on this quick surface.

No. 40 Kyrgios was playing his second quarter-final here in eight years.

He is the first Australian man to reach the four at Wimbledon since Lleyton Hewitt in 2005.

“I’m really happy I was able to come out here with my team and put on a performance,” he said.

“I felt I was playing on the back foot a lot. Garin’s a hell of a player. I got lucky on a couple of break points so I’ll take that and will prepare for my next match.”

The player who carries on voluntarily without a coach relied in 17 aces to get him out of trouble against Garin, whose serve he broke three times in the straightforward rout which took two and a quarter hours.

“I just never thought I would be in the semi-finals of a Grand Slam. I thought the boat had passed. I’m really proud.”.

Kyrgios kept his emotional toll to a minimum with barely an outburst on his way into the final four.

The Aussie expressed his pleasure at what he has been able to accomplish so far here, with his record on grass in 2022 now a formidable 12-2.

“it was an exceptional atmosphere. Here I am in the Grand Slam semi-finals. I didn’t necessarily do things well at the start of my career, I missed opportunities.”

He said that worrying about his semi-final will not be on the programme:

“I’m not thinking about the semi-final yet. Tonight, my father is going to cook us some food and we’re going to watch a little movie. That’s all.”

Against Nadal, Californian Fritz, winner of the run-up Eastbourne title on grass, tried to take full advantage of his hampered opponent, coming back from early breaks in the first two sets against a player who stood 7-0 in  Wimbledon quarter-finals.

As the contest wore one, Nadal, who had two small bandages on his right abdominal area, looked to be in some discomfort, leaning his head against the green court wall when he went for the towel.

The 22-time Grand Slam champion had gone through the fortnight refusing to elaborate on his physical problems by keeping his thoughts strictly on the tennis.

Nadal perhaps did himself no favours as he took his match with Fritz into a deciding fifth set, breaking the American for 6-5 in the fourth before serving out the next game.

The 36-year-old second seed then ran away with the final-set tiebreaker,  grabbing a 5-0 lead before Fritz could get onto the scoreboard.