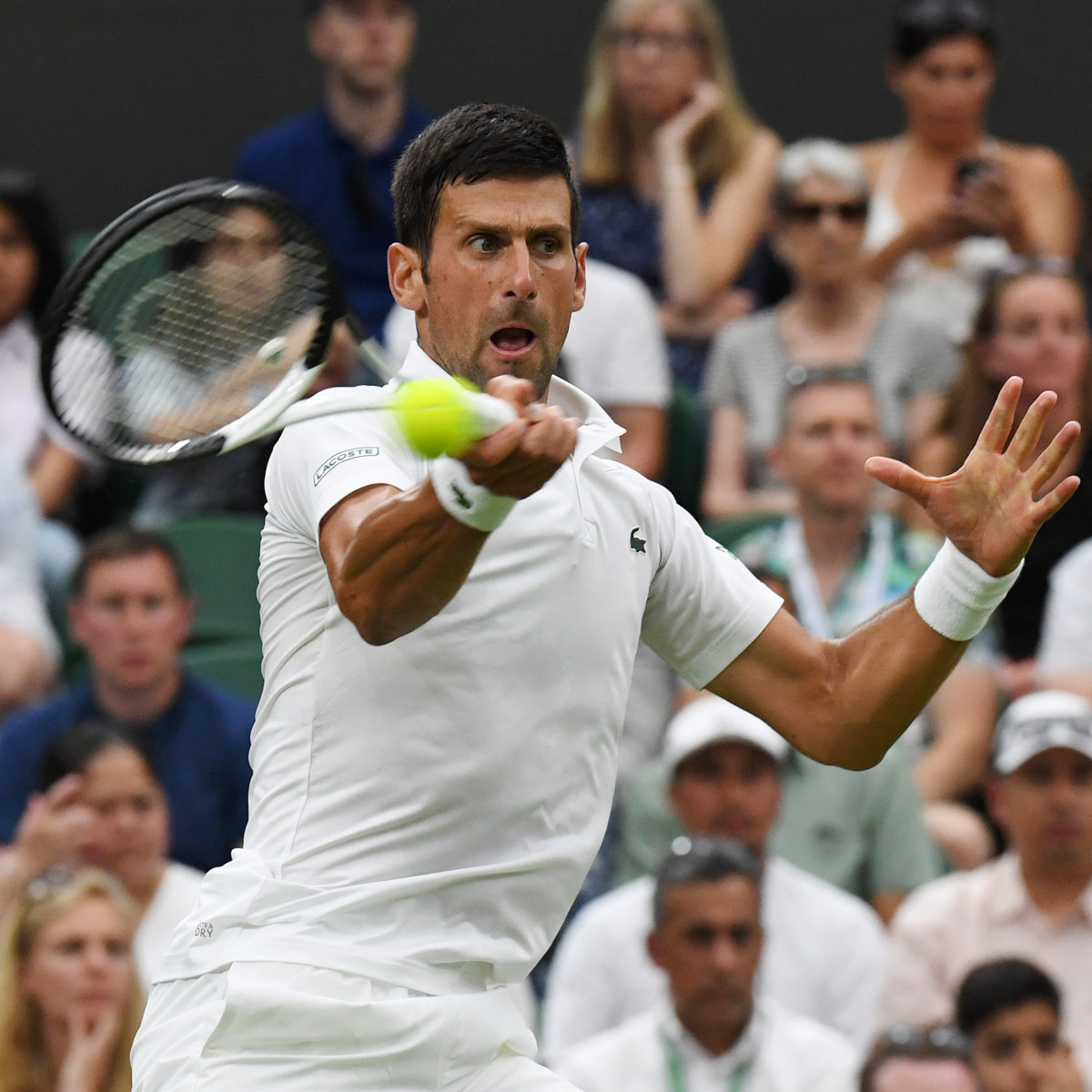 Novak Djokovic got off to a shaky start of his Wimbledon title defence on a rain-interrupted Monday, with the top seed twice forced to recover from a break down to finally beat Kwon Soon-Woo.

The Korean challenger ranked 81st, put the Serb in difficulty in the first two sets before Djokovic took control to finally run out the 6-3, 3-6, 6-3, 6-4 winner after two and a half hours.

Djokovic won his 80th Wimbledon match, making him the only player – male or female – to win at least 80 at each of the four Grand Slams.

“I didn’t have any lead-up preparation or matches,” the winner said. “That makes you always a bit less comfortable at the beginning against someone as talented as Kwon.

“He stays close to the line and hits very clean. It was difficult to hit through him,

“I had to figure out a tactic and put a lot of variety in my game. If he had broken me at one point in the third set, the match could have gone another direction.

“One or two points can decide a winner, I’m just glad I was on the winning side today,”

Djokovic is trying to gain traction this troublesome season as he plays where he can due to his refusal to get jabbed for COVID.

The 35-year-old was deported from Australia and is almost certain to be banned from entering the US in August, meaning he will miss out on the US Open.

WImbledon this year counts as a mere exercise in vanity due to its lack of ranking points due to the club barring entries from all Russian and Belarus players due to the invasion of Ukraine and getting sanctioned by the ATP and WTA.

Djokovic has won the last three editions played, dating to 2018.

The first rain interruption of opening day came just 40 minutes after the start of play, with another halting progress on the outside courts in mid-afternoon before the sun broke through again.

Third seed Casper Ruud moved through to the second round in slightly easier fashion than Djokovic, completing a 7-6(1), 7-6(9), 6-2 defeat of Spaniard Albert Ramos-Vinolas in two and three-quarter hours with 14 aces and four breaks of serve.

“I haven’t played much on grass this year, because I went for some holidays after Queen’s (this month) before coming to Wimbledon,” the Norwegian said.

“I had four days to get ready, so I was a little interested to
see how I was going to play.

“But I felt well. I mean, I’m here at Wimbledon. There is something very special with these courts. Any time you get to play on a match court it’s a great feeling.

“I was playing well and I’m very happy with the level I was able to show today.

The 19-year-old with limited experience on grass also won a five-setter on his Wimbledon debut a year ago.

“I feel pretty good, I didnt expect to move as well as I did,” he said. “I don;t know how I won, but it was my best serving match.”

Ninth seed Cam Norrie was halted on the verge of victory by the weather as he led Pablo Andujar two sets and 5-3, with the Brit coming out to finish the job in later afternoon 6-0, 7-6(3), 6-3 .

American Tommy Paul, who reached grass quarter-finals this month at Queen’s and Eastbourne, kept up his pace with a 6-1, 6-2, 7-6(4) defeat of Spain’s  Fernando Verdasco.

The veteran from Madrid played a quarter-final here in 2013 but has gone down in the first round in four of his last five Wimbledon appearances.

Poland’s seventh seed Hubert Hurkacz fell victim to the Jinx of Halle as the Pole who defeated Roger Federer here in the quarter-finals a year ago saved three match points in the third set but eventually lost 7-6(4), 6-4, 5-7, 2-6, 7-6(8) to Alejandro Davidovich Fokina.

“This win means a lot,” said the former junior champion. “I’ve played a lot of Top 10 players and never won.

“But I’ve proved on grass that I can do it.”

Since 2011, any Halle winner player not named Federer has lost at the next Wimbledon in the first round.