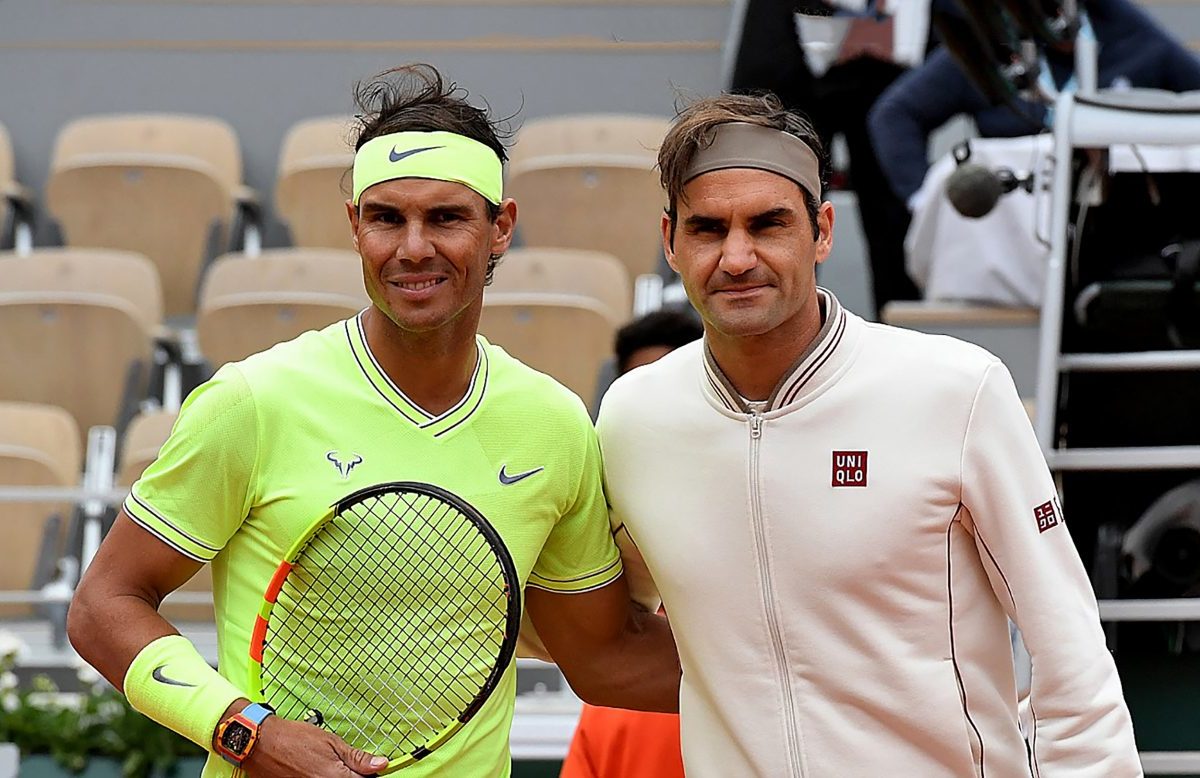 Tennis heavyweights Roger Federer and Rafael Nadal have been set up for a potential semi-final clash at Wimbledon which would be a re-run of a semi won by the Spaniard at Roland Garros in straight sets after the draw was made on Friday.

The draw prevents Nadal or Federer from facing Djokovic until a potential final,  providing all of the major names advance

With Nadal “demoted” to third seed under an arcane Wimbledon rule allowing the all-powerful Committee to seed players according to grass-court prowess, grumblings form the Nadal camp have been emerging all week.

Nadal could still do it tough through on the grass, with his outlook complicated by a minor injury hiccup in recent weeks.

Defending champion Novak Djokovic was placed in the top half of the men’s draw, with No. 2-seeded Federer and No. 3- Nadal in the bottom half during today’s draw at the All England Club.

Djokovic begins his campaign on the grass without a warm-up event as he plays Germany’s court-wise Philip Kohlschreiber, who beat him this spring at Indian Wells on hardcourt.

Federer, an eight-time winner at the All England Club, was placed into the second seeding behind Novak Djokovic.

Federer opens in the first round against 87th-ranked South African Lloyd Harris.

The draw could see possible men’s quarter-finals between Djokovic and rising Greek star Stefanos Tsitsipas, last year’s finalist Kevin Anderson up against Alexander Zverev and Federer against Kei Nishikori, with Nadal v Dominic Thiem in another showdown – and a repeat of their recent  French Open final.

The 18-time grand Slam champion starts his Wimbledon campaign against  Japan’s Yuichi Sugita but then could run into an immediate challenge if mercurial Australian Nick Kyrgios reaches the second round.

Kyrgios has paid the price for not being seeded at the All England Club since his stunning win as a teenager five years ago over Nadal.

Kyrgios will meet in-form compatriot Jordan Thompson in the opening round.

Alex de Minaur, Australia’s only seed in the men’s event, will open his campaign against Italian Marco Cecchinato.

Boris Becker is throwing his considerable moral support behind countryman-in-crisis Alexander Zverev, tipping the 22-year-old to pull his personal life together in time for Monday’s start of Wimbledon.

Wimbledon sixth seed Zverev begins in the first round against qualifier Jiri Vesely,  but the young German who has excelled at the Masters 1000 level with three titles plus the year-end final trophy last November, has little to show at the four majors.

His best two results have been Roland Garros quarter-final at the past two editions.

But Becker, a three-time Wimbledon winner, says the youngster is working to clean up some background noise in his private life which has been affecting his performance somewhat in recent months

“He is in a bit of a crisis at the moment, there is no doubt about it,” the 51-year-old Becker said.

‘That’s another part we shouldn’t underestimate. He’s gone through a lot of issues of the court, split with his (management) agency, his father was ill, private issues. That reflects on the court.”

The young German has beaten only one Top 20 opponent so far as the season hits the halfway point, putting out Monte Carlo champion Fabio Fognini at Roland Garros while losing his other eight meetings with fellow elites.

“He can be a future No 1 but obviously you have to have a complete game for that.”

In the women’s draw, French Open women’s winner Ash Barty will take the top seeding at a Grand Slam for the first time after displacing Naomi Osaka,

She will begin her challenge against world No.43  China’s Zheng Saisai.

Osaka gets Yulia Putintseva of Kazakhstan

Should she win her opener, Barty’s  next test is likely to come against former champion and one-time world No.1 Garbine Muguruza in the third round.

Barty will have to fight through the pain barrier to win at Wimbledon.

After three days off to recover from an arm injury, she reported no setbacks although still a little sore.

Interestingly, Barty withdrew from the Strasbourg International with the same problem before winning the French Open.

“When I have a heavy week, I have just make sure I am doing the right things to let it settle,” Barty said.

“The French was OK, having the day on day off helps, not having too much of a spike in a row.

“But we have managed it my whole career. We have played with it through pain and weeks we have to take a step back and manage it properly.”

The German faces countrywoman Tatiana Maria in the first round.

Serena Williams  seeded 11th after a hit-or-miss season so far, plays an Italian qualifier in the opening round.

Home interest in Andy Murray’s return to Wimbledon in the Men’s Doubles could see a revival of the sibling rivalry between  Andy and his older brother Jamie. If the pair of them win their first two matches, they would meet  in the third round.

Murray made a winning return to competitive tennis in the doubles at Queen’s last week after hip surgery in January,  and won the title with partner Feliciano Lopez.

Jamie, his elder  brother, who has twice won the mixed doubles at Wimbledon  is playing with  fellow Brit Neal Skupski.

Wimbledon officials said last week that Andy Murray would not be “upgraded” to play on Centre court as a matter of course, but surely they would have to re-think that policy should a juicy third round match-up of the Brothers Murray materialise?