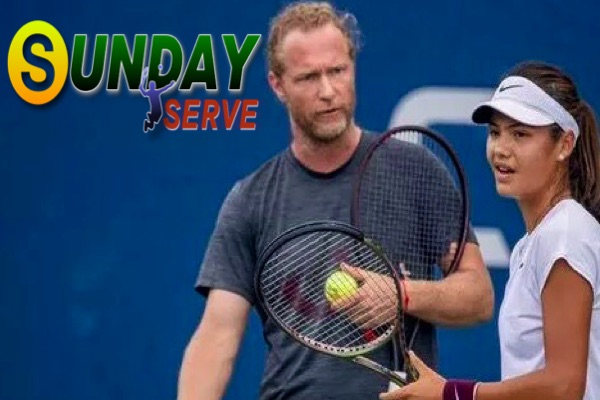 As Dmitry Tursunov broke his silence over his departure as Emma Raducanu’s coach last week, more questions emerged over who is actually managing the former US Open champion.

Tursunov was polite and avoided the obvious elephant in the room when he spoke about his short tenure, but it is becoming clearer that anyone hired to coach her will have to answer not to the young Brit, but to her father Ian.

Raducanu, who turns 20 in a few weeks, is, as Tursunov has stated, a raw talent, but needs a two to three-year plan to reach and then stay at the top.

Chopping and changing coaches every few weeks or months is not a winning formula.

“She’s extremely talented, very athletic and very coordinated. She is hungry to improve and is obsessed with tennis.”

The Californian-based Russian said he loved working with her and added it was difficult to walk way.

“She’s minimum a one-year project but I would say she’s a two-and-a-half-year project,” he added.

‘But her game is very raw and in many ways it could use a lot of improvement.”

Tursunov detailed all that to what he called “her team”, code for the dad-led group trying to manage her career, which has dived since she won the US Open in 2021.

He added that they needed to just have “one voice”. Code again for something not quite right?

It was clear what Tursunov was advocating – a longterm plan – wasn’t what her family was looking at – or perhaps, on the right terms.

Right terms usually means two things: we do it my way – and – this is how much it is going to cost.

Those were the ‘red flags’ Tursunov said could not be ignored – but clearly were.

Right now, Raducanu sits a lowly 76 in the WTA rankings.

Her ability to be the draw card – something managers IMG and her commercial partners would require – has almost gone.

And, as Tursunov moves on to help world No 13 Belinda Bencic, the name Emma Raducanu is becoming less and less valuable, on and off the court.

Raducanu withdrew from the Billie Jean King Cup late in the week with a wrist injury.

She was supposed to represent Great Britain at the finals which in Glasgow, Scotland.

“I’m disappointed to get the news from the doctors that I won’t be ready in time, particularly with it being on home soil,” Raducanu said in a social media post.

After her much-publicised exit at the US Open only a few weeks ago, the 23-time grand slam champion told a conference in San Francisco: “I am not retired.”

Williams said she ‘evolving’ way from tennis before her US Open departure, but is she?

“The chances (of a return) are very high. You can come to my house. I have a court,” she said last week.

She then explained she woke up “the other day” and went on the court and considered for the first time in her life that she wasn’t playing in a competition.

“It felt really weird,” she said.

“It was like the first day of the rest of my life and I’m enjoying it, but I’m still trying to find that balance.”

But full-time on the circuit?

No, this looks a like Serena farewell tour on the back of wildcard invitations, which cynics would say works for both her and a Grand Slam’s bank balance.

WHICH nicely ties in with American Sports Pro Media’s list of the top marketable athletes in the world for 2022 – and nine tennis players listed:

And No.1? Ageing soccer star Cristiano Ronaldo, who cannot command a starting spot at Manchester United any more, is still regarded as a marketer’s dream.

The WTA Finals has a fourth home in four years after Fort Worth, Texas was confirmed at the event’s new venue yesterday.

“The Dickies Arena and the city of Fort Worth has a proven track record of hosting world-class sporting and entertainment events,” WTA chief executive Steve Simon said.

“We are excited to bring the WTA’s showpiece tournament back to the United States for the first time since 2005.”

Los Angeles’ Staples Center was the last American venue to host the season-ending tournament, staging the event from 2002 to 2005.

So far world No.1 Iga Swiatek is the only player who has booked her ticket to the event.

The Pole has qualified on the back of winning the French Open and winning four WTA 1000 events this season.

FORMER world No.1 Ash Barty has revealed in her memoirs My Dream Time: A memoir of tennis & teamwork, that she battled insecurity and anxiety during her early years.

Barty wrote that she was distressed seeing “aesthetically beautiful goddesses from South America and Eastern Europe” in the changing rooms, to the point where she would change alone in a cubicle.

“I had massive insecurities about my body, which developed, as they often do for girls, when I was around 13, maybe even younger. It was definitely daunting as a young girl,’ Barty wrote.

“I went through that like a lot of people do and a big part of my passion now is to encourage girls and boys to be comfortable in themselves.

“It helped me realise that imperfections are part of all of us and they are OK. By sharing some of my insecurities hopefully it can help them realise a lot of people go through it. This is a very common issue.

‘”I’m not built like other girls – I’m built like an athlete. I hated the way the training showed.

“I didn’t tell anyone about how they would walk around without a towel on and I wouldn’t know where to look, only that I didn’t want anyone seeing me so exposed. I got changed in a shower cubicle each day.”

Barty, 26, who retired at the peak of her career earlier this year, said she was able to turn her insecurities into a weapon.

“I ended up changing my thinking and in the last three years of my career I trained in a way that made my body a weapon,” she wrote.

“When I played my best I knew girls could not get the ball past me.

“I may not look like everyone else but it was really invigorating to know I had trained my body to do exactly what it needs to do.”

My Dream Time: A memoir of tennis & teamwork is published non November 2.

AND finally … it’s the coaching merry-go-round time of year.

Sven Groeneveld has announced that he has decided not to continue his partnership with Bianca Andreescu.

And World No.6 Caroline Garcia has split with her coach Bertrand Perret in what is believed to be a messy end to their partnership.

No doubt more (as in splits) to come.