Who is to blame for ‘Joke-ovic’ drama? 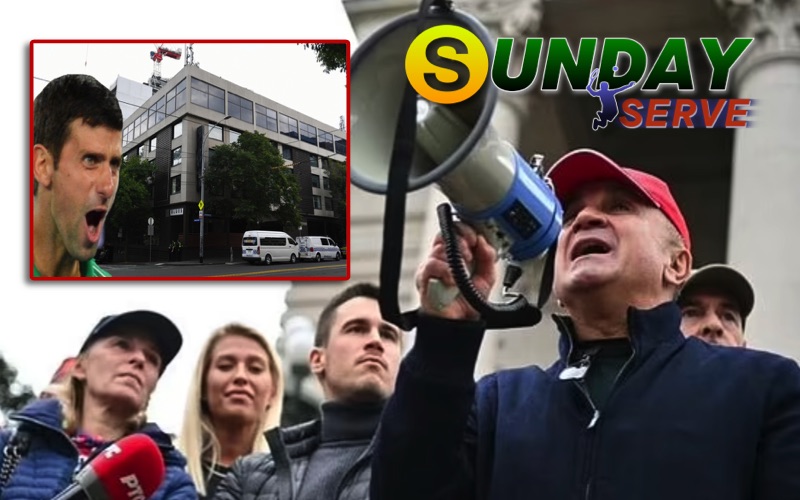 A week is long time in politics and the past few days seem like an eternity for Novak Djokovic and Tennis Australia as details emerge ahead of a court case tomorrow of desperate attempts officials adopted to accommodate the world No. 1’s attempts to get to Melbourne.

SO who is to blame for the Novak Djokovic saga – or the Novak ‘Joke’-ovic drama as it has been called – a saga that has been front page and top of the news agenda on almost every news channel around the world this week.

Certainly not Australia – where the entire population has been subjected to the toughest covid-related lockdown rules on earth, a country where there is little sympathy for his plight.

There is definitely zero sympathy in the city of Melbourne for a millionaire sportsman who refuses to state his vaccination status during a global pandemic and then appears to boast on social media he has dodged the rules and is on his way Down Under.

He then wants entry to play in a major sporting event on the basis that “I have already had the virus, so I’m OK”.

Or was Djokovic misleadingly told that because he had already had the virus, he was OK to enter Australia last Wednesday evening?

Australian media revealed on Thursday that Federal health authorities told Tennis Australia boss Craig Tiley on two occasions in writing that players, or support staff who were not vaccinated but had contracted COVID-19 in the past six months would not be granted quarantine-free travel to Australia.

Victorian State officials then confirmed that Tennis Australia boss Craig Tiley did not pass this advice onto the Victorian government.

And here is possibly the key to this farce… the medical exemption provided to Djokovic by an independent panel, set up by the Victorian health department, gave him permission to play in the Australian Open once he was in Victoria, without knowing this.

The permit would only have come into effect once Djokovic arrived in the country.

“You can only participate in the tournament if you’ve been granted the appropriate visa, and that’s very much a matter for the Commonwealth government,” an official said.

Which is why Tiley is now under enormous pressure to find a pathway out of this mess.

If the rules had been followed, Djokovic would never have been given permission to enter Australia – because having previously suffered from the virus is not valid exemption under Australian law.

So, the next question is, why did Tennis Australia assume a medical exemption on that basis was legal – leading to them informing Djokovic he could play?

Were Tennis Australia so desperate to have him play in Melbourne they thought the rules, as set out by health minister Greg Hunt in a letter to Tiley in November, didn’t apply – or did they misinterpret them?

One suspects the former, because that letter from the health department was very specific.

And finally, was Djokovic badly treated on his arrival in Melbourne?

That answer is a categorical ‘no’.

He was treated no different to any other person arriving without proper rights to a legal entry.

The immigration system in Australia is a two-step process.

You apply for a visa and are granted one to travel, then on arrival you have to prove you have all the correct paperwork to allow that visa to be approved for entry.

Djokovic clearly didn’t have that and was subsequently held in custody.

He was never going to be released into the community – no other illegal entry is allowed that luxury.
The next question is then who is to blame, if blame should be afforded, for the visa error?

Tennis Australia for giving him the wrong information? Or his own lawyers for not following immigration procedure.

The bottom line is Tennis Australia can give advice but do not control immigration processes.

And, as has been explained a number of times, it is the individuals responsibility to ensure he has the correct paperwork upon entry.

One can feel some sympathy for Djokovic, as he spends the weekend holed up in a sleazy immigration hotel in Melbourne, but 20-odd million Australians have spent nigh on two years in lockdown, unable to travel, in a bid to prevent a national covid catastrophe.

They have followed the rules – perhaps Djokovic and his advisors, including Tennis Australia, needs to as well.

DOCUMENTS filed in the Federal Court in Melbourne yesterday show Djokovic tested positive to Covid SIX days after the Tennis Australia deadline to apply for a medical exemption.

Djokovic is believed to have used used his positive Covid-19 result from December 16 to gain a vaccination exemption from Tennis Australia.

Applications for exemptions had to be submitted to an independent medical panel by December 10, and had Djokovic submitted his application before the December 10 deadline he would not have succeeded as he had not contracted the virus.

So did Tennis Australia know he had contracted the virus after the deadline?

And if so, why did they sidestep the rules and authorise an exemption?

Also, a question worth asking: why did Tennis Australia’s Biosecurity Manager resign a few days before Djokovic arrived?

MORE details have emerged about Djokovic’s six hours in ‘detention’ at Melbourne airport on Wednesday and Thursday.

Interestingly some media are reporting he was asked if he want to cancel his visa.

This is not correct – Immigration officials tell you if your visa is cancelled – you do not have a choice.

CZECH player Renata Voráčová became another to see her visa cancelled on Thursday after it emerged she too had entered on a dubious medical exemption.

She was also being detained in the same immigration hotel as Djokovic and has since left the country.

Voráčová had already played in a warm-up tournament in Melbourne.

SUPPORTERS of Novak Djokovic who intend to boycott television coverage of the Australian Open will not have a significant impact on ratings or advertising revenue, according to industry leaders.

Ben Willee, the general manager of Spinach Advertising, told The Australian newspaper that while Djokovic’s potential absence from the Grand Slam tournament is ‘not ideal’, it won’t stop people from watching it on TV.

He said: “It’s not ideal… because everybody loves to have someone to hate. That’s what makes great reality TV. It’s a shame if the villain won’t be there.”

FORMER Davis Cup player Paul McNamee who ran the Australian Open from 1995 until 2006 as tournament director, was one of a few who thought Djokovic should have been allowed entry.

“It’s not fair. The guy played by the rules, he got his visa, he arrives, he’s a nine-time champion and whether people like it or not he’s entitled to fair play,” McNamee told ABC News.

McNamee claimed Djokovic was following the rules, but leaked letters from government health officials now show the rules were not followed.

“Players need to know with confidence that if they’re flying round the world to events, there’s not going to be this sort of problem at entry,” McNamee said.

“It’s a problem we’ve seen over the last two years in Australia and the victim of that is the No 1 player in the world.”

The last two years has seen a major upheaval in international travel, including the entire Australian population denied any sort of travel.

And whether you are world No.1000 or No.1 you are still expected to adhere to whatever immigration rules apply.

THE one-eyed vitriol from Belgrade over the Novak Djokovic affair showed this week that no one there had actually read why the world No.1 had been denied entry into Australia.

For the record Mr Vucic, Australian Border Force were operating within the tough immigration laws of the country and Mr Djokovic, regardless of who he is, deserves at the point of entry no special treatment if he has submitted the wrong visa or not given the correct information.

Djokovic could be kicked out of the country next week because he did not have the correct visa and could not prove a medical exemption allowed him entry.

‘What is not fair-play is the political witch hunt by everybody including the Australian Prime Minister pretending that the rules apply to all,’ Mr Vucic said.

Yes, Mr Vukic, rules do apply to all – Australians still cannot travel to see loved ones, so why should an unvaccinated player, no matter his status, be allowed to come and go as he pleases?

DJOKOVIC has angered Melbourne residents by demanding a personal chef and access to a tennis court while being held in an immigration hotel.

His demands were rejected by Australian Border Force and he was informed he would receive no special treatment while in custody.

The world No.1 also asked to be transferred to a rented apartment with a tennis court so he could train, but that was also denied.

Djokovic is being held at the $109-a-night Park Hotel in Melbourne along with 32 other asylum seekers.

AUSTRALIA’S Home Affairs Minister Karen Andrews has reiterated her comments from Thursday that Djokovic can leave any time he wants to return to Dubai and is staying of his own will while lawyers contest the border ruling.

AND finally, on Saturday evening, a letter from Tennis Australia to players informing them unvaccinated players could get a medical exemption if they had previously had the Covid 19 virus in the past six months, was leaked to media.

The letter contradicts another letter Tennis Australia received from government health officials in November informing them this was not a valid exemption.

To qualify, players were told to provide a Covid-positive PCR test dated after July 31 along with antibody tests proving natural immunity ‘if available’.

It is believed Djokovic travelled to Australia using this exemption.

The letter has put pressure on TA boss Craig Tiley to prove what he was told and when, with growing calls for him to resign.

So the scenario ahead …

This court case will set a precedent for the unvaccinated to enter Australia with an exemption if they’ve had covid in last six months if he wins.

If he initially wins, then the federal government and the Immigration department will almost certainly appeal on the above basis, as you cannot have strong borders for some and not for others.

This is no longer just about tennis – it’s about border rules for international travellers.

It’s going to be an interesting day in the Federal court tomorrow.