Who is Sonja Kenin?

SO, who is Sonja Kenin, the young lady who ended Serena Williams’ Paris Grand Slam challenge?

Let’s flashback to March 2005 at the Adidas Jamboree at the Arthur Ashe/Butch Buchholz Tennis Center in Miami. 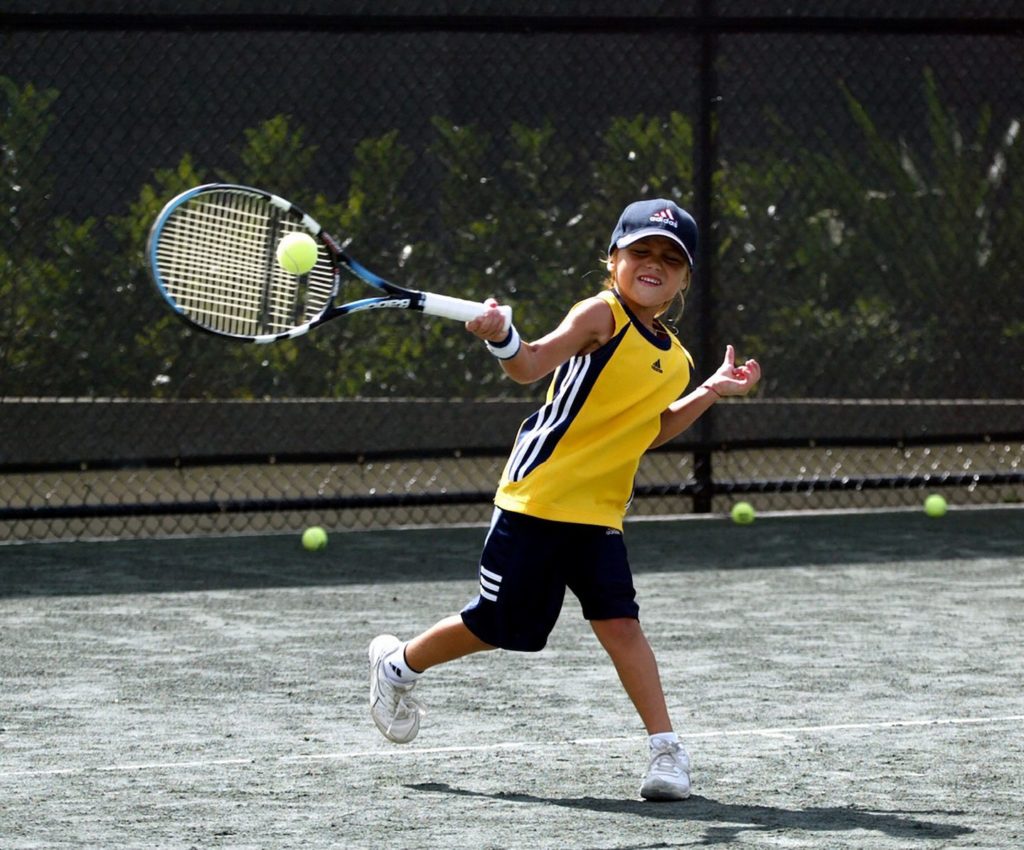 Anna Kournikova is hitting a few balls with ‘little Sonja Kenin’ from Pembroke Pines, Florida, who was also born in Moscow, Russia.

Sonja was attending the clinic for several hundred South Florida kids, while mum Lena observed. “She speaks the same Russian as us, from Moscow, so that makes us feel at home,” Lena said.

Sonja had been been taking tennis lessons from Rick Macci in Fort Lauderdale three times a week for about 18 months.

The master of ceremonies, tennis coach Wayne Bryan got a big laugh, when he referred to Sonja, as Anna Kournikova, Jr.

“Anna is my friend and my favourite tennis player. When, I grow up, I want to be just like her,” little Sonya said. Well, she did!

Her ’shock’ win over Serena Williams in Paris on Saturday has sent got the tennis world asking” Sonja Who?

She was born on November 14, 1998 in Moscow.  Made her debut in the Top 100 of WTA rankings last year.  As a junior, she won the USTA Girls’ 18s national championship at the age of 16. Started playing at the age of 5, after her parents moved from Russia to Florida – some people have all the luck!

Kenin made a successful start to 2019, winning her first WTA doubles title, alongside Eugenie Bouchard at the ASB Classic in Auckland, New Zealand.  Then another  in Hobart a week later as she defeated Ons Jabeur, Kirsten Flipkens, Alize Cornet and Anna Schmiedlova to win her first WTA singles title. The victory pushed Kenin to a career high ranking of 37.

Congratulations young lady – welcome to the world of Grand Slams.

STICKING with Serena … we will call her the ‘bag lady’ – because she was at it again in Paris, grabbing all the goodies and giving nothing away – despite her millionaire status.

Grandslamtennis.online published pictures from Melbourne in January of Serena stuffing towels and other free items into a bag after her appearances, while other stars threw theirs to the crowd.

Well, she’s been at it again – with second bag, just for those goodies.

Our photographers captured Ms Williams trying to squeeze as may RG towels as she could into her swag bag, instead of handing them to adoring fans.

For the record, Naomi Osaka gave hers away, and when Stan Wawrinka went to help a young boy caught up in the crush for post-match autographs, he happily handed over his player towels to the distraught boy and his dad.

“People were pushing too much, and he started to cry because he had some pain.” Wawrinka said.

“I took him out of that mess a little bit, and he was in pain and sad. I tried to make him feel better, give him a towel, and try to find his dad.”

Serena’s quick exit from Roland Garros on Saturday night was without sand towels.

She quickly packed her bag and was gone – no waiting 90 minutes for a press conference – she was out of there in double time.

Presumably she had a flight to catch – with all that excess baggage!!

FRENCH Open fans were up in arms over ticket allocations for Rafael Nadal’s game on Wednesday.

Nadal’s game against Yannick Maden had been moved to Court Suzanne Lenglen and fans, who then turned up to watch the game on TV screens, vented their anger at the empty seats surrounding the court.

“It’s just a disgrace that tickets for #RG19 are scarce and yet there are glaring empty seats at a Nadal match,” one fan wrote on Twitter.

“I don’t know if it’s a failure of the ticketing system which I think is in dire need of reform or there’s something else in play.”

The consensus was that the seats were sold, but their owners were off having lunch.

Oh, how the French ‘must’ have a good lunch.

DID anyone spot who was coaching of Japan’s Kei Nishikori in Paris this week?

Michael Chang was 17 when he won the French Open in 1989, his marathon 4-hour victory over Ivan Lendl is still talked about today.

It was the first time an American had won at RG in 34 years. This week in Paris, the Nonetheless, the 47-year-old father of three was working some magic on Nishikori, with many asking: “is that Michael Chang?” Yes, it was.

COMEBACK of the week: “You wonder that she’s thinking underneath that towel” – the words of the TV commentator as Naomi Osaka struggled in her first round game against 90th-ranked Anna-Karolina Schmiedlova.

Wonder indeed… but she found something in those thoughts, something to rectify the errors of so many cross-court shots that went low and into the net.

The after committing virtually no errors for two sets, Schmiedlova made a mistake – and Osaka was back in the game.

But the reigning Aussie and US Open champion’s second serve percentages were woeful – 28% – and she bowed out saturday evening, another top seed not up to her game.

WHY do the Brits have an allergy for clay? The Brits have never faired well in Paris, but Johanna Konta seems to be bucking the trend.

Konta beat Lauren Davis this week to become the first British woman into the thirds round since Joe Durie in – 1992.

WORLD No.4 Kiki Bertens had high hopes at Roland Garros, but it wasn’t meant to be after illness struck ahead of her second-round match.

She left Paris in tears, after succumbing to a gastro illness that forced her to retire from her second-round match against Viktoria Kuzmova.

“Yesterday I felt good,” Bertens told reporters. “No problems at all. I was practicing, resting, and I felt really well. Ready for today.

“And then this morning I woke up at 3:00, and then I felt really sick. Vomiting, diarrhea all night long, all day long.

“I felt a little bit better before the match. I had some sleep, and I just wanted to give it a try, but then as soon as I start warming up right before the match, it started again.

“Yeah, there was not any energy left.”

Bertens, say many, was the one to beat, and she was on fire on the clay with a 13-3 record.

SCENE and heard: Elina Svitolina moved an on-court sponsors advertising board which prevented her from reaching a shot and potential injury. The line judge immediately replaced it, much to Svitolina’s chagrin.

The device serves no other purpose than as a merchandising tool. Clearly advertising revenue means more than player safety – until the first injury and ensuing damages claim?

RG has – allegedly – gone green. Media are given one plastic coffee cup with their credential on arrival to re-use.

However, if you can afford the champagne, “save the planet” issues seem to take a back seat! 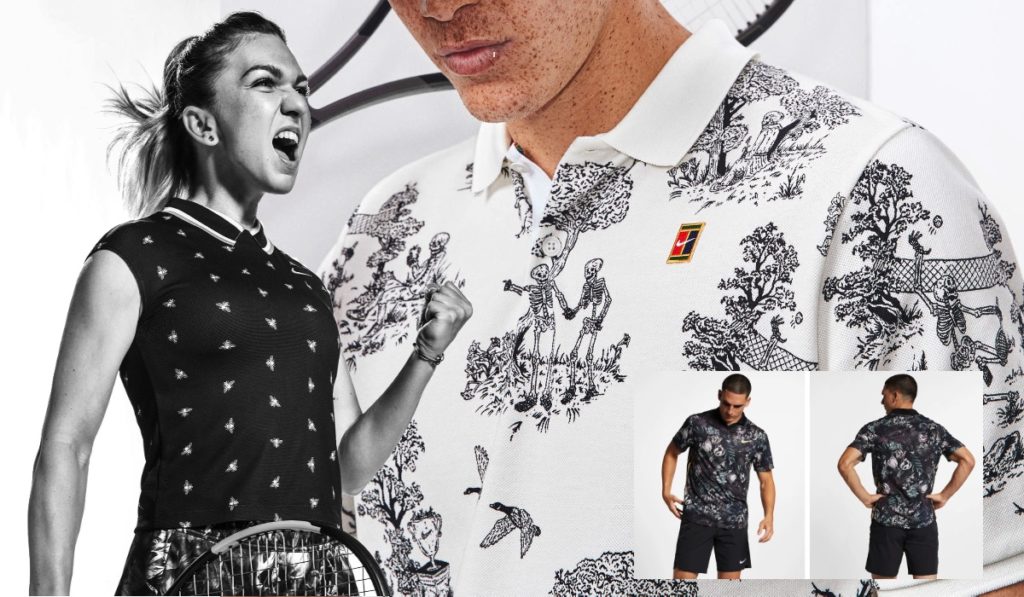 For 2019, Nike is dressing the majority of its ambassadors with the “Paris collection” inspired by the toile de Jouy.

Timeless for over 200 years, as their advertising spiel says, the toile de Jouy embodies the traditional French know-how and radiates the good taste of the French throughout the world.

The brand offers 2 outfits for men (dark floral and skeleton) and one for women (flower of “Bee” – Bee).

And there’s a collection for sale on the Nike website – from 65 euros.