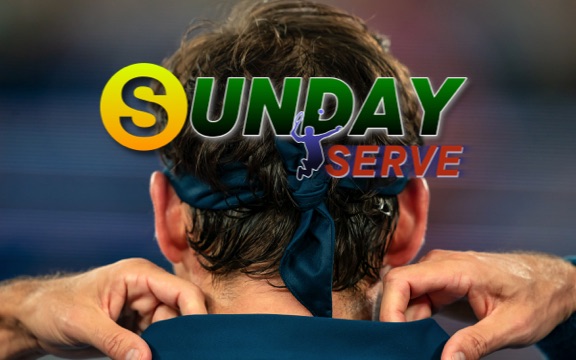 AS the world of tennis salivates over a new generation beginning to make their collective marks on the game, some of us from the ‘older’ generation are asking if 2022 is the year the legendary Swiss icon of the game hangs up the racquet and retires.

For a year many have been asking: Where’s Roger?

Roger Federer of course – but as his rehab from knee surgery continues, 2022 may well be the year we farewell the 20-time Grand Slam champion.

He has already admitted there doubts over a return to competitive tennis, he had hoped for a return sometime during this European summer but then admitted Wimbledon was perhaps an ask too far.

“At 40 or 41, it’s the same. The question is whether I can push myself hard day after day. Today, my heart says yes. So I’m going step by step,” he said a couple pdf months ago.

“But I would be extremely surprised if I could play Wimbledon.”

He only managed to play 14 matches in the 2021 season – a season plagued with both injury and covid restrictions.

And Patrick Mouratoglou, who is expected to become Novak Djokovic’s new coach soon, believes Federer will never win another Slam.

“He has only played three majors in the past two seasons and has already announced that he will not attend Wimbledon this year. I see it hard that he can increase his Grand Slam tally.”

Last month Federer posted a video of him practising, but it is looking increasingly likely he will miss Wimbledon, which begins on June 27.

Roger has said he wants to go out on his own terms.

“Even if I know that the end is near, I want to try and play some more big matches. That will not be easy, but I want to try,” Federer told Tribune de Geneve last November.

“Let’s be clear: My life is not going to fall apart if I don’t play another Grand Slam final. But that would be the ultimate dream – to get back there.”

Whatever does happen, it would be a bit sad to remember his finale as that 2021 straight sets loss to Hubert Hurkacz at Wimbledon last July.

QUOTE OF THE WEEK – Casper Ruud

“It was not where I imagine myself playing my first Masters 1000 final [on a hard court], but I will take it. It is a great feeling and I am enjoying the city and the tournament. It was pretty brutal today. Very humid, which made the breathing a little tough”.

CASPER Ruud also shared on social media this week that he has played a few rounds of golf with Rafa Nadal in Mallorca.

“Honestly, a bit tough to play with, because he doesn’t say much because he’s so focused. Usually on the golf course you are laughing a little bit and joking around. With him, it’s no jokes.”

THE Broward Palm Beach Times had a unique take on the Miami Open this week, with a column on what to do and what to eat or drink while in town.

“There are no COVID protocols to enter and the grounds are as much of a spot for a social experience as they are for world-class tennis,” it published.

“The landscape all the more intriguing as the Formula One Miami Grand Prix track and stands take shape and weave through the surrounding parking lots.

“The culinary offerings are a draw in themselves, with croqueta flights from Dos Croquetas, ceviche from SuViche, and a spicy chicken sandwich from Fuku (not sure how pronounce that).

And You can even get a frozen margarita with a tennis-ball-topped stirrer from a place called Bodega.

As for the best view – check this out …. a gondola ride that stretches above the courts outside the main stadium and provides panoramic vistas of the action.

FORMER British star Tim Henman described the Nick Kyrgios and Jannik Sinner match at the Miami Open as a “proper circus” this week.

While Henman praised the Italian for keeping his focus as Kyrgios let loose, the Aussie firebrand was unhappy with chair umpire Carlos Bernardes and he let the experienced ATP umpire hear it.

Kyrgios was hit with a big fine in the first set tie-break and Bernardes then hit Kyrgios with a game penalty as Sinner started the second set.

“For the vast part of the match Carlos Bernardes got it spot on,” Henman said on Eurosport.

“He gave Nick a little bit of leeway in the first set but if behave like that you have to face the consequences.

“It was a proper circus out here. There were a lot of distraction, a lot of opportunities for Sinner to lose concentration and he didn’t do that”.

Circus maybe an understatement – clearly Kyrgios has learned nothing from his previous misdemeanours and fines. Maybe a ban is necessary now to stop this disgraceful behaviour.

“UNPROFESSIONAL answer and professional answer, what I’m honestly thinking now is like how to get Korean food Uber Eats to my place, because there is nothing inside of the delivery range,” Naomi Osaka said after her semifinal win in Miami.

“But in terms of the match, I’m glad I was able to pull through.”

After the match, the four-time Grand Slam singles champion tweeted her gratitude for the current moment she is experiencing.

“Man idk what’s going on but I’m just so grateful right now,” Osaka tweeted. “Cheers to the ups and downs of life for making me appreciate this moment even more. We’re back in a final, see you on Saturday.”

Nice to se a smile on her face.

“Why is what she did unusual?” he asked.

“She had the perspective to find the self-worth not just through what she does and what she wins.

“With Ash, her perspective has enabled her to perform better because she doesn’t take that baggage on the court. But it enabled her to retire better. And I think that is success.

“I genuinely don’t know what she does next. Obviously I will keep working with her and what comes next.”

STICKING with Barty… she was spotted shopping in suburban Queensland this week with a shopping trolley instead of a racquet in hand.

Barty looked relaxed and happy as she headed to the shops.

The three-time Grand Slam winner then took her groceries from the supermarket to her sponsored Jaguar F-Pace. Barty is an ambassador for the car brand.

WE can’t let the week go by without commenting on the Oscars and Will Smith – only because it links to the King Richard movie about the Williams’ sisters and their father.

“I just sat down, because I was, like, I gotta put that drink down,” she said.

Serena and sister Venus kicked off the show at the Oscars, with a performance from Best Original Song nominee Beyonce, with her song “Be Alive” from the movie.

The performance was pre-recorded at the tennis courts in Compton, where Serena and Venus learned to play tennis while growing up.