We had no other option: referee explains Djokovic disqualification 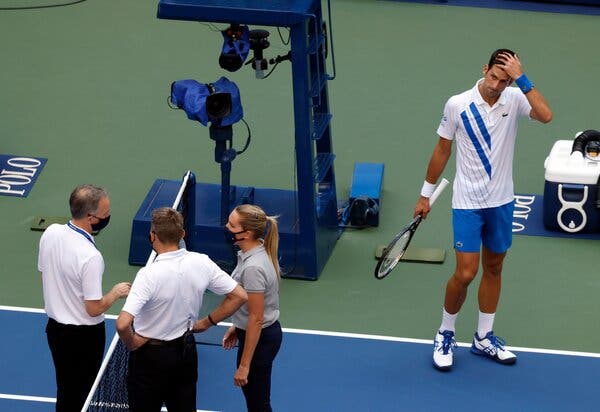 US Open Tournament Referee Soeren Friemel said he had “no other option” but to disqualify world No.1 Novak Djokovic on Sunday.

Djokovic swatted a ball to the back of the court at Arthur Ashe Stadium, and hit a line judge in the throat.

Friemel said the action warranted Djokovic’s disqualification from the tournament, “based on the fact that the ball was hit angrily, recklessly, that it went straight at the line umpire’s throat”.

He added he did not believe the 33-year-old intended harm.

“There are two factors, one is the action and the result,” he said.

“And the action – while there was no intent – the result of hitting a line umpire and (her) clearly being hurt is the essential factor in the decision-making process here.”

Friemel said he had never defaulted a player in Grand Slam before, and added the saga was a “very unique experience”.

Djokovic said he was “extremely sorry” to the line judge.

“Defaulting a player at a grand slam is a very important, very tough decision,” Friemel said.

“It doesn’t matter if it’s on Ashe, if it’s number one or any other player on any other court – you need to get it right, you need to make the right decision.”

Djokovic released a statement after the match:

“This whole situation has left me really sad and empty. I checked on the lines person and the tournament told me that thank God she is feeling ok.

“I‘m extremely sorry to have caused her such stress. So unintended. So wrong. I’m not disclosing her name to respect her privacy.

“As for the disqualification, I need to go back within and work on my disappointment and turn this all into a lesson for my growth and evolution as a player and human being.

“I apologise to the @usopen tournament and everyone associated for my behaviour. I’m very grateful to my team and family for being my rock support, and my fans for always being there with me. Thank you and I’m so sorry.”

Djokovic was fined for missing the post match press conference and will also lose prize money over the incident.