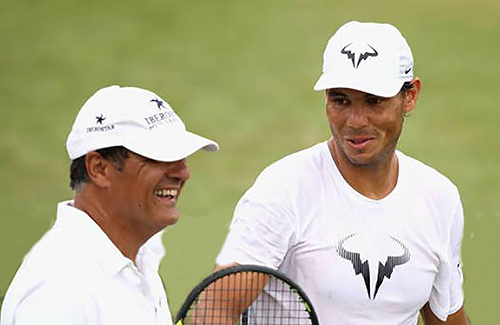 Rafael Nadal’s Uncle Toni remains convinced that his world-class nephew will be healthy enough to front up for Wimbledon, thanks to progress on treating his chronic foot nerve injury.

“When we talked yesterday, he said it’s going much better. He wants to train.

“If he has a small chance, he will play at Wimbledon.”

Nadal has been receiving electric stimulation treatment in Barcelona and then resting on his home island of Mallorca.

The 36-year-old who won his 14th French Open title last weekend in Paris, has been troubled for years by the niggle which makes every match an exercise in pain management.

Nadal confessed that he probably would not have gotten through at Roland Garros without daily pain-killing injections.

“If Rafa has an operation, he can no longer play at a high level. That’s why he doesn’t want to do it.

“But an operation wouldn’t be an issue otherwise (outside of tennis).”