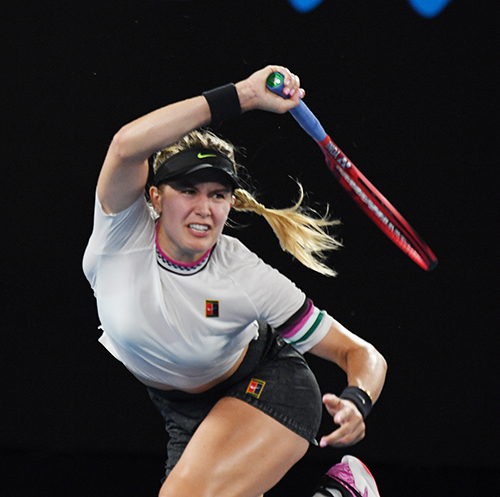 Former Wimbledon finalist Eugenie Bouchard has unleashed her basic instincts on court in Dubai, with the Canadian aiming for a return place at next month’s Australian Open.,

The No. 141 who looked to be bound for the WTA elite during the season of her life seven years ago, won her first-round qualifying match at the Aviation Club in an effort to earn a return to Melbourne Park from February 8.

Since returning to tennis after the five-month 2020 lockdown, the photogenic 26-year-old has been all but unstoppable, winning eight of 11 Tour matches played and reaching a September final at Istanbul.

“I spent the whole quarantine (March-August 2020) in training,” Bouchard said.

“It was tough not to have any tournaments to play. So I felt like an animal out of the cage when we started to play again.”

Bouchard, who has used a training base in Las Vegas at Andre Agassi’s academy, said her intense fitness work with Gil Reyes since autumn, 2019, has produced the desired effect..

“It’s been awesome,” she said. “I wanted to feel so physically strong that (fitness) could never be an excuse.

“I can stay out there for three hours and take on anyone – that was my goal.

“The (quarantine) downtime was a blessing in disguise, I’m so motivated now and I really want to improve my ranking.

“I had to sit with a bad ranking for months and months,” the one-time WTA No. 5 said.  “I used that for motivation.”