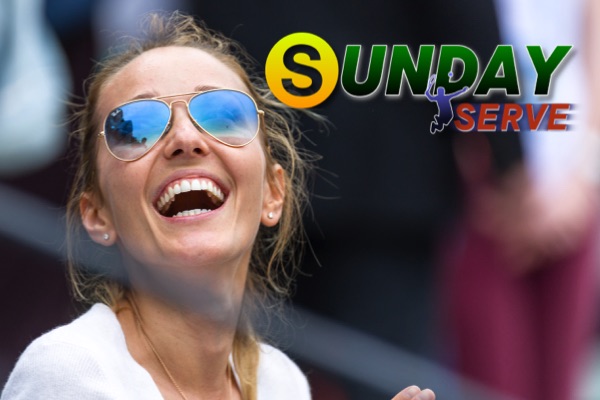 JELENA Djokovic is no stranger to criticism on social media, protecting husband Novak, especially through his refusal to be vaccinated against the Covid-19 virus.

A statement on Thursday that Djokovic would not be playing in Montreal came as no surprise to everyone in the game, given Canada’s tough stance on the unvaxxed.

But Canadian Racquet Magazine, which apparently has a following of 10,000 on Twitter, questioned why the Serb had even entered the event.

“Dunno why this guy keeps entering tournaments hoping they’ll change their rules for him,” they tweeted.

Many pointed out that entry is often automatic, based on ratings and the message was liked by over 500 followers.

But wife Jelena responded to the tweet by quoting it with the caption: “Is this a real, international tennis magazine?! @atptour Wow”

Djokovic is believed to be still hoping US President Joe Biden will allow him to enter her country unvaxxed, while stopping others.

Coach Goran Ivanisevic, though is not as optimistic.

He told Italian news outlet La Repubblica: “Novak will do everything to be there, maybe he will get a special visa… but there are only two weeks. Personally, I have zero hope that Biden will change the rules before the tournament starts.”

WORLD No.3 Rafael Nadal, who has not played since suffering an abdominal tear at Wimbledon last month, has withdrawn from next week´s ATP event in Montreal, he said on Twitter on Friday.

The announcement marks a major blow to the Spaniard´s hopes of being fully fit for the US Open which begins in New York at the end of the month.

“Since my return to training, everything has gone well these weeks. Four days ago I started work on my service and yesterday, after training, I had a little discomfort that was still there today,” Nadal tweeted in Spanish.

“We have decided not to travel to Montreal and continue with the training sessions without forcing ourselves. “I have no choice but to be prudent at this point and think about my health.” It was the latest in a lengthy series of injuries for Nadal who, in the absence of Djokovic at Flushing Meadows, will be looking to add to his record 22 Grand Slam titles.

NICK Kyrgios, who got a surprise reaction when he went to help a fan who was hit in the face by a stray ball during his match against Tommy Paul at the Citi Open on Wednesday, gave an umpire a code violation during the match with American Tommy Paul.

With Paul serving at 4-5 during the second set, the umpire signalled a power cut in the stadium which disrupted the flow of the game and stopped the game.

When play continued Paul saved the match point – and Kyrgios was not happy.

AND … Kyrgios’ win over Sweden’s Mikael Ymer in the semifinal in Washington saw the Aussie take another step towards a title.

But it came at a cost as Kyrgios had to endure late, late night to reach the final of the Washington Open.

“I didn’t get to sleep until 4.50am, I just had so much adrenaline after (the Tiafoe win),” Kyrgios said.

“I got some treatment and my body was just so sore after last night. It was an epic battle.”

INTENSE heat on America’s east coast has seen a few players struggling during the week, including Taylor Fritz.

Fritz was forced to retire from his match at the Citi Open due to the sweltering conditions in Washington.

But as the match progressed Fritz was struggling as the temperature soared to above 95 degrees.

Fritz retired because of a ‘heat-related’ illness and afterwards wrote on social media he felt ‘embarrassed’ about having to pull out.

“First off, health wise I’m okay. I feel embarrassed not being able to finish a match. I’ve never pulled out of a match in my life but after my episode in Toronto last year where I pushed myself to finish the match and almost passed out, I assured my team I would pull out if similar symptoms happened again,” Fritz explained.

“Typically, I pride myself on my fitness and ability to compete in very hot/ humid, brutal conditions.”

AND Emma Raducanu also revealed she found the heat a problem in her match against Louisa Chirico.

The Brit picked up blisters during the match and needed a medical time-out.

“It came out of nowhere to be honest,” she said.

“At the beginning of the match I was alright, then throughout the match my skin was just ripping off.

“In the beginning, there was like a flap, but then the flap got ripped off and it was pretty raw and open.”

Blisters weren’t only issue though as temperatures soared.

“I think I died about three times in that match and then came back. I don’t know how!” Raducanu said.

“Camila is such a battler. Every single point I was working so, so hard and sometimes it wasn’t necessarily the strongest shots, but you’ve just got to generate, generate over and over again.

RADUCANU also revealed how she was progressing with her new coach Dmitry Tursunov.

“He definitely has a good sense of humour, and he’s definitely trying to make me take things easier on myself,” she said.

“I put a lot of emphasis on everything I do, and I want to do it the best of my abilities all the time.”

SLOVAKIAN tennis player Andrej Martin has become the latest player to be suspended for doping.

The International Tennis Federation found that the 32-year-old tested positive for an illegal substance on June 7.

Martin has been suspended until further notice, with investigations ongoing.

The 204-ranked player was competing in a men’s singles match in the Bratislava Open at the time.

The player said his suspension had come as a surprise to him and rejected claims he took a prohibited substance on purpose and to gain an advantage.

He released a statement saying: “From my youngest days, my parents taught me to be honest both in sports and in life. I’ve always been the same, people who know me are very aware of how much I judge fraud and lies.

“The news about the positive doping test shocked me. I categorically reject the idea that I deliberately took something on the list of prohibited substances. I use very few supplements and have not changed them in the last five years.”

NO Laver Cup for Nick Kyrgios this year.

That was the tweet put out by the Aussie this week, revealing his mum wasbattlkng kidney disease.

“Gotta have that home time with my family and beautiful girlfriend,” Kyrgios wrote on his Instagram page.

Mum Norlaila is set to receive a kidney from husband Giorgos, provided the pair are compatible and Nick wants t spend time back home in Canberra with his family.

“My mum is not doing too well with her health. I’d like to go back and see her,” he said.

AND finally… how much are some of the greats of tennis worth, financially?

Well, according to a report this week, John McEnroe is worth a staggering g $100 million.

His prize money total came to $12,552,132 but McEnroe earned far more from endorsements and sponsorships, such was his appeal.

They own valuable homes in Malibu, California and McEnroe also owns an art gallery in Manhattan.