French team officials remain optimistic that Jo-Wilfried Tsonga will recover from a minor shoulder complaint in time to compete in the Davis Cup final against Croatia this weekend.

Coach Loic Courteau said the former French No. 1 Tsonga was forced to abort training this week, but he added the 33-year-old should be fit when the tie begins today in Lille. 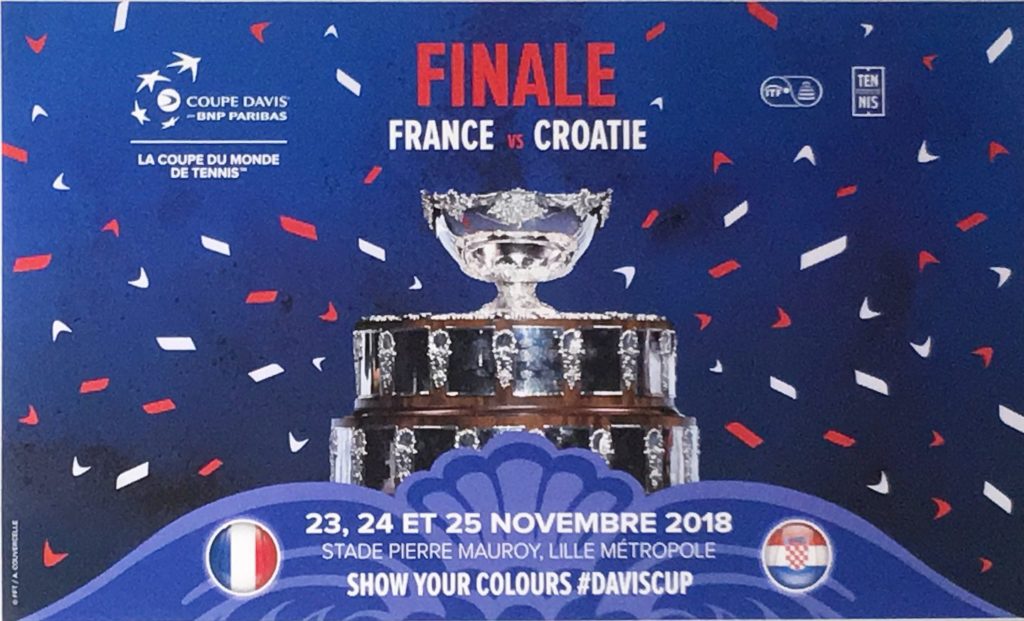 “He felt a bit of numbness in his shoulder and we didn’t want to take any risks. There’s no worry. There’s no problem for Jo.”

French captain Yannick Noah sprang a surprise at yesterday’s final draw ceremony when he named Jeremy Chardy and Tsonga as his singles players for the opening day’s action in Lille.

Already without the likes of Richard Gasquet and Gael Monfils for the final against Croatia, Noah decided to leave out the top-ranked Lucas Pouille.

World No. 40 Chardy will open the final against Croatia’s Borna Coric with Tsonga then meeting Marin Cilic.

Leaving out Pouille is a potential gamble although the 33-year-old Tsonga played in last year’s final when France beat Belgium.

Sunday’s reverse singles will see Tsonga face Coric and Chardy take on Cilic, although the captains are allowed to change their teams.

France are trying to retain the trophy in the worldwide team competition at the  world but are missing top players including Gael Monfils and Gilles Simon.

Croatia will be led by the one-two punch on the clay of Marin Cilic and Borna Coric as it faces a French side without a single player in the ranking top 30.

France are aiming for back-to-back titles for the first time since 1932, when it won a sixth on the trot.

Fighting for the home side will be Lucas Pouille, Jeremy Chardy, Pierre-Hugues Herbert, Nicolas Mahut and Tsonga.

Croatia lost the 2016 final at home against Argentina, lifting its lone Davis title in 2005.

France have a six-tie winning streak at home; but Croatia have not lost an away match in three years.

Cilic, who drove straight from the ATP Finals in London to Lille, says it is difficult to say one team is favourite.

“Both teams have their own advantages,” he said.

“But I will be ready. We’ve had Davis Cup ties already on clay immediately after hard court tournaments,” he said, referencing the quick change of surface from London to Lille.

“I’m going to be fine, adjusting my play, a bit more of sliding, running. The conditions indoor clay are slightly faster than outdoor clay. I will be fine.”

The ATP No. 7 heads the visiting side as Croatia play in a second Davis Final in the last three editions; in 2016 they lost to Argentina.

But captain Zeljko Krajan is hoping to inspire his side by challenging them to come good after Croatia lost the football World Cup final to the French last July in Moscow.

In doubles, specialist Mate Pavic has made the same switch as Cilic after competing in the London season wrap-up.

The 25-year-old will be desperate for a fist victory in the international team competition after losing four previous rubber.

“France have a team that can play well on any surface,” he said, “They adapt well. But I don’t see clay as a big advantage for them compared to us.”

Play begins today at the Stade Pierre Mauroy, which is expected to be packed out for the competition.

Saturday, November 24
1.40pm: Hall of Fame Ceremony, followed by a a tribute to the members of the France Davis Cup Club
1.50pm: Presentation of the teams, followed by the doubles at 2pm (best of five sets).

Sunday, November 25
12.50pm: Presentation of the teams, followed by the two singles matches at 1pm (best of five sets)*. *15 minutes after the end of the matches: closing ceremony and award ceremony