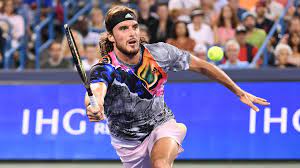 Stefanos Tsitsipas accepted the gift of 11 double faults – four in one disaster of a third-set game – to roll into a Cincinnait Masters final against unfanced Croat Borna Coric.

Fourth seed Tsitsipas defeated a world No. 1 for only the second time in a dozen attempts with his 7-6(6), 3-6, 6-3 defeat of top seed Medvedev.

Both semis were played simultaneously at night due to four hours of rain interruptions in the afternoon.

“I knew I would have a difficult task in the third set,” Tsitsipas said. “He made it a very physical match, very demanding.

“But I took advantage of his missed first serves, they gave me time to think of my next move clearly.

“I was very calm and concentrated on every single task.”

Coric only returned to the Tour last March after a year out with shoulder surgery and never expected to get this far, this fast.

“It was a long day. I didn’t expect to be playing in the evening,” Coric said. “It was a crazy day (of rain delays) but it finished very well.”wash

The only tournament finalist with a lower ranking than the Croat was Romanian , No. 191 Andrei Pavel, who played the Roland Garros final in 2003.

Coric turned his game around against Norrie after committing 14 unforced errors in the first six games.

Norrie could find only nine winners.

“I played extremely well, but in the beginning I was not there,” Coric said. “I then found my rhythm and began serving better. That was the key to the match.”