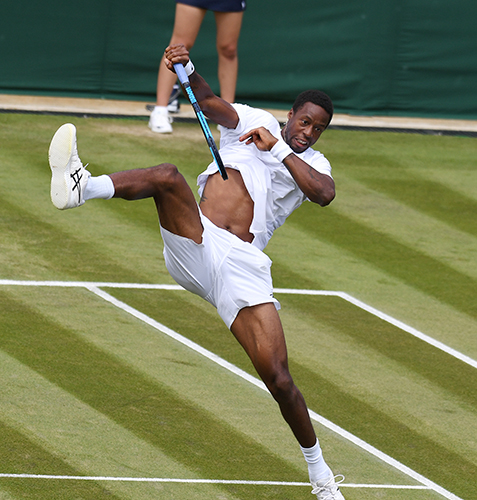 Gael Monfils absorbed a 6-4, 5-7, 6-4 upset loss on Wednesday against 283rd-ranked Max Purcell to exit the Eastbourne Championships in his opening match.

Even 16 aces were not enough to save the Frenchman, who stood two points from defeat in the second round but won the set to take the match into a deciding third.

He had been aiming for his first ATP quarter-final since Dubai, 2020.

Monfils, who has been off his game for months, will head to Wimbledon with a pair of opening losses on grass after last week in Halle and his English south coast defeat by Australian Purcell.

The elated winner is counting his success as a breakthrough or sorts.

“It feels unbelievable. I’ve struggled to get into any singles events over the past nine months and primarily played doubles,” Purcell said.

“To get on a run here, on my favourite surface, is great. I thought I’d come out and have a go.

“When I missed the opportunity to close out the match at 5-4 in the second set, Gael showed what a good player he is.”

French top seed Monfils now stands a dismal 2-8 on the season after going out to the lucky loser from qualifying.

The 34-year-old ATP No, 16 played the final here four years ago, losing to Novak Djokovic.

Monfils went up a break in the third set, but lost his own serve twice as Purcell prevailed on his second match point after nearly two and a quarter hours.

The Frenchman may have been feeling the stress of 2021 even before taking to the court, telling welovetennis.fr: “It’s tougher on grass because a game can hinge on just a few points.

“Even if you are feeling better, when you get to the game, you have to be able to make the right choices to attack the right ball.

“I want to focus on things that I can improve on grass such as trying to serve better, be even more aggressive on the first try,” he said.

Kazakh Alexander Bublik, who sent over 18 aces in his opening match, could manage only five as he reached the quarter-finals 6-2, 6-2 over Egor Gerasimov of Belarus, who had put out Jo-Wilfried Tsonga on Tuesday.