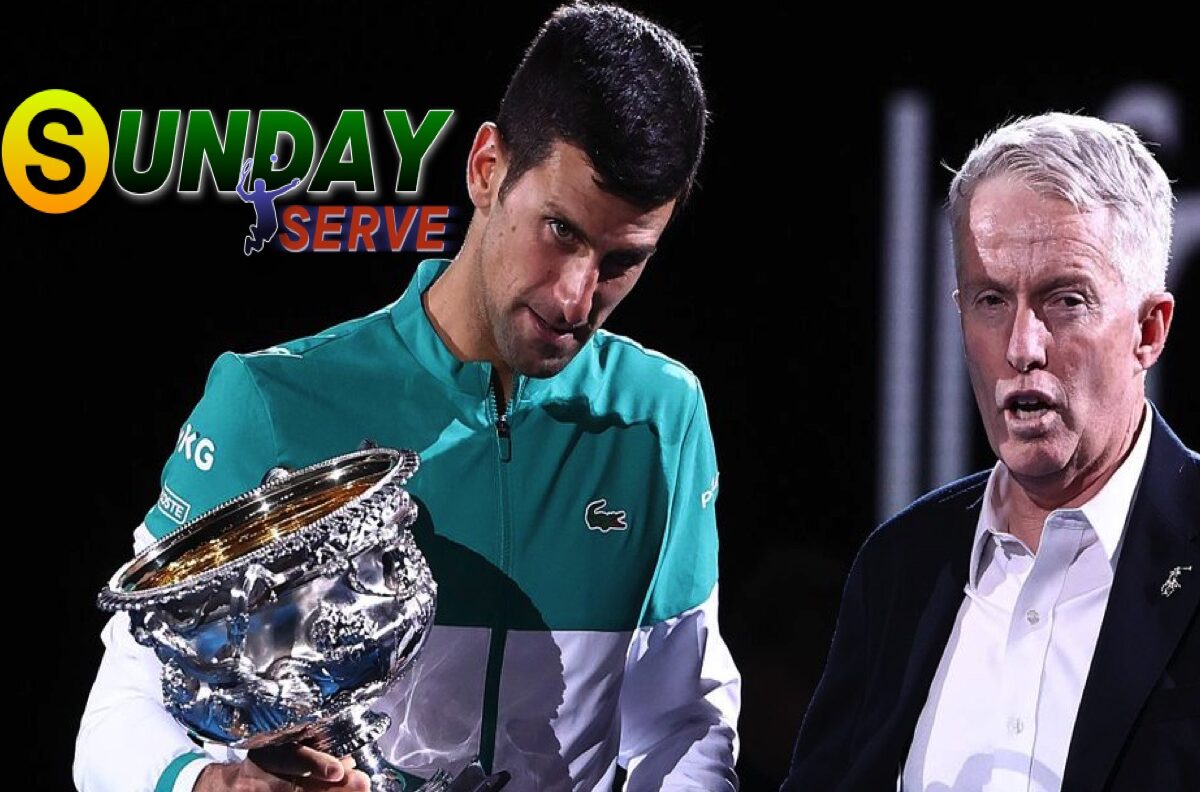 FOR good reason Aussie tennis chief Craig Tiley has distanced himself from any decisions to overturn the three-year entry ban on Novak Djokovic ahead of January’s 2023 Grand Slam in Melbourne.

Earlier this year Tiley was front and centre in the saga that eventually saw the then world No.1 deported from the country for not being vaccinated against Covid-19.

Tiley had tried to secure a medical exemption for the nine-time Open champion, and faced pressure to step down from his high profile roles over his involvement in the debacle.

Miscommunication between State (Victoria) and Federal authorities (the ultimate decision maker on immigration) was blamed for the drama.

But this time around he’s staying well out of any potential political battle over allowing Djokovic to return to there country early.

Speaking at the launch of the 2023 tournament, Tiley said he would not be involved.

“The matter with Novak is direct between himself and the Federal government,” Tiley said.

“They need to work out the situation and then we’ll follow any instruction after that.

“It’s not a matter we can lobby on. It’s a matter that definitely stays between the two of them and then depending on the outcome of that we would welcome him to the Australian Open.”

Djokovic can apply for an exemption from new Immigration Minister Andrew Giles but former home affairs minister Karen Andrews has already warned against the move.

She told the ABC it would be a “slap in the face” for Australians who abided by COVID-19 protocols for two years.

And State Victorian Sport Minister Steve Dimopoulos said his government had no plans to go in to bat for Djokovic either.

It’s a sporting serve nobody wants to return.

Meanwhile, Russian and Belarusian players will be welcome at the 2023 Australian Open.

But they will not permitted to compete under their country’s flags.

Tiley confirmed the ATP’s ruling that players compete as neutrals at the event.

“At this point, Russian and Belarusian players will be eligible to play in the Australian Open,” he said.

Woodbridge, 51, who is now a commentator, described the incident as a ‘wake-up call’ of the hidden dangers even for the fittest of middle-aged people.

“It was last Thursday, I tried to keep my routine having travelled to the US Open and London and I was just exercising and had chest pains and every symptom when you look up Google – full sweats and I felt awful,’ Woodbridge said.

“I had a little heart episode that goes down as a mild heart attack which is a bit of a shock to me.

“I consider (I) lead a pretty good fit healthy lifestyle – I keep active, I eat well, I do all the right things, I enjoy doing that.

PIC of the week … Somewhere in South Africa – the origins of the clay court perhaps?

SO, who split from who in the latest Emma Raducanu coaching saga?

Did Emma fire Dmitry Tursonov, or did the American-based Russian call it quits after barely 10 weeks together?

The decision though is a disturbing one for the Raducanu camp, four coaches in 13 months in not the pathway to tennis success.

It’s not the pathway to any sporting success, as questions once again have surfaced over the 19-year-old’s career.

Then, as one member departs, another joins – Andy Murray’s former fitness trainer Jez Green has linked up with Raducanu.

British tennis commentator and former player Sue Barker believes the 19-year-old should team up with someone she has faith in.

“I feel she needs one person that she really trusts and believes in,” Barker told the Daily Telegraph in London.

“And to me that would be totally confusing. It would be disruptive before it became effective. But I also feel that the pressure that she’s been put under has just been immense.”

Green is a very good fitness coach, but not a tennis coach – so will be next on this remarkable merry-go-round?

AND…. Tursonov ‘liked’ a tweet last week suggesting Raducanu’s parents are the issue.

One of these tweets read: “Apparently it was Tursunov’s decision. His new player suits his California residency much better and he was having visa issues anyway. Not sure if he’s being entirely truthful or trying to save face for Raducanu though.”

Another read: “Tursunov practically running away, isn’t [it] a bad sign for you? Like something is going on inside there.”

And Tursonov liked a tweet: “Appears the parents are mismanaging. It’s like an owner of a major league sports team telling the GM to change coaches annually or what players to draft.”

Tursunov was seen practising with Belinda Bencic in Guadalajara last week ahead of the Premier 1000 event there next week.

WTF … Social media can be cruel – and it was last week as speculation grew over family photos to be published of Rafa Nadal and his new son.

No doubt the real pics have already been sold to Hello Magazine.

The ongoing war of words between Greek Stefanis Tsitsipas and Aussie-Greek Nick Kyrgios deepened last week as Tsitsipas’ mother spoke out on the subject.

“The only person who confuses Stefanos is Nick Kyrgios,” she said in a sporty published by the Greek City Times.

“In the Wimbledon match, Kyrgios decided to ignore the general rules of sports. The match became very strange and nervous because he was playing ‘dirty’ tennis.

“Stefanos doesn’t play like that. He completely lost his temper due to the behaviour of his opponent and lost the match without being any worse on the court.”

We await a response.