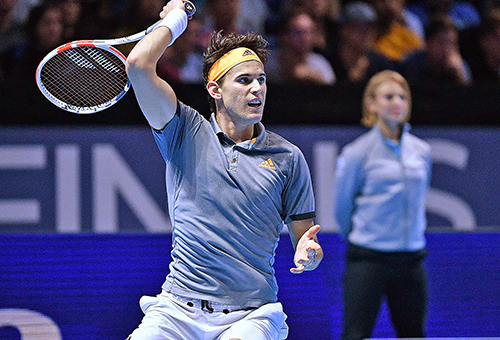 Dominic Thiem will delay his departure for London’s locked-down ATP Finals until Wednesday as he waits for Tuesday’s announcement of Austrian athlete of the year.

The US Open champion from Vienna is among the heavy favourites along with Bayern Munich Champions League footballer Davia Alaba plus a handball player, ski jumper and alpine ski racer.

2019 finalist Thiem must arrive in London by Thursday to take a pre-event COVID-19 test and sit in his room in the adjacent player hotel to await the results.

The ATP No. 3 has said he is now healed from foot problems which bothered him less than a fortnight ago at his home event in Vienna,

“After losing in the quarter-finals at my home tournament in the Wiener Stadthalle, I cured my injury on the sole of my foot,” the 27-year-old posted on social media.

“Two or three days (with the foot) off the gas, then I started preparing for the season finale in London’s O2 Arena.”

Thiem said that while the COVID situation in London is not much better than in Vienna, he is ready to compete no matter what.

“Memories of the previous year are good. In the group matches I beat Roger Federer and Novak Djokovic, in the semi-finals I defeated Alexander Zverev.

“Then in the final there was a 6-7 third set against Stefanos Tsitispas. “

Thiem also revealed his shock after coach Nicolas Massu was out in the city not far from a series of terror attacks in the Austrian capital just a day after the tournament final.

“My trainer Nicolas Massu experienced the terrible terror attack in Vienna at first hand, was eating near the rampage in a restaurant and was locked up until 2:30 in the morning.

“A terror attack that shocked the whole world. Suddenly, (quiet) life in Austria came to an end.  Very, very sad. “