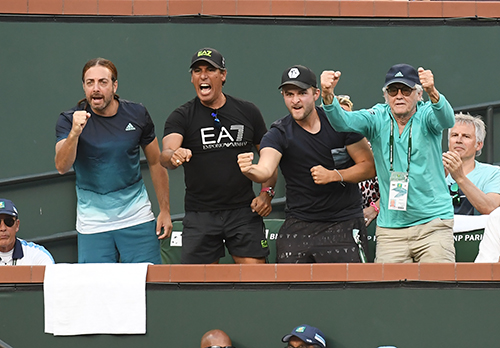 Dominic Thiem’s coach Nicolas Massu was locked down in a restaurant for eight hours on Monday night during a series of suspected terror attacks which rocked Vienna.

The shootings at what police say erupted at six separate locations in the capital, were suspected of being ISIS inspired; police reported four dead and 15 taken to hospital.

The attacks occurred a day after the final of the ATP 500 event in the city’s Stadthalle, four km away across the normally tranquil city.

Chilean Massu live-posted his situation inside a restaurant not far from the scene, telling followers that he and others were locked down in the establishment for most of the night.

“I am in the center of Vienna, very close to the attack. They have us inside a restaurant, waiting to see when we can leave here ”, he posted before receiving dozens of messages of support.

At dawn on Tuesday, Massu was able to reassure his social media followers that he was safe and unharmed back at his hotel.

“I am now calm in my Hotel, after a very big scare. We were locked in the restaurant for 8 hours as a precaution. Thank you all very much for your messages.”

Thiem has skipped this week’s Paris Masters to deal with a foot problem and is due to complete his season from November 15 at the ATP Finals in London.