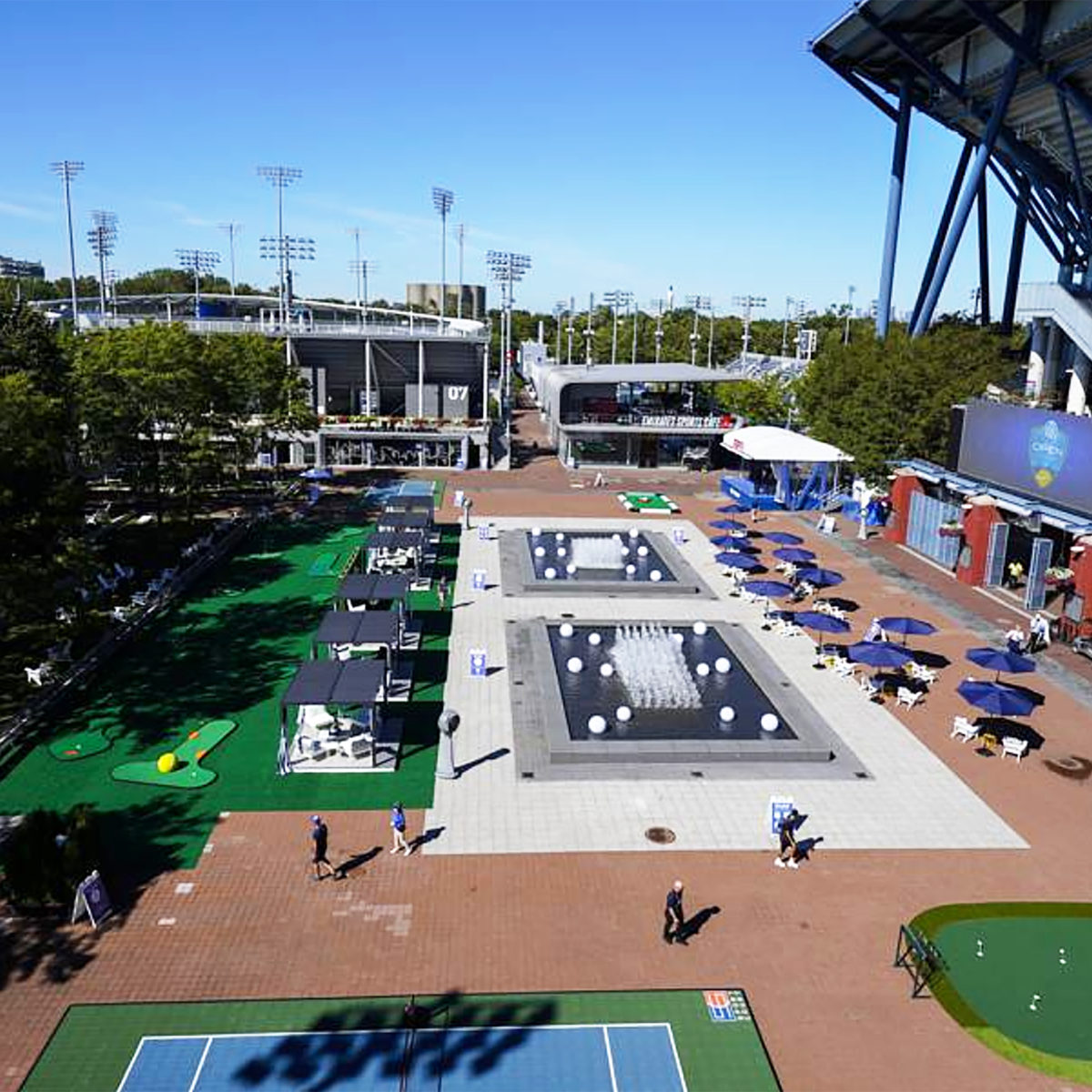 The first players for the re-located Western and Southern Open, precursor to the US Open began arriving into the New York “Bio-bubble” at Flushing Meadows on 15th August and instead of finding the South Plaza teeming with spectators entered into a private playground with mini golf, jumbo sized video screens showing soccer and tennis, life sized billiards, soccer played on a mini tennis court and even “cornhole” a bag tossing game also known as “horseshoes”  in Europe.

The Mercedes Activity Centre has been converted into an outdoor fitness area and if feeling peckish after all that activity, the players and their entourages can indulge themselves in luxury outdoor dining on the rooftop of the Mercedes building.

The Emirates café on the second floor of the stadium has also had a makeover into a player dining area with regulation socially distanced table reducing capacity to below 50 percent.

If that isn’t enough, and you are one of the top 32 seeds you will be provided with one of the 80 luxury suites surrounding Arthur Ashe Stadium as your player lounge, normally occupied by the well-heeled patrons.

The, USTA’s on site chief operating officer Danny Zausner has kitted out each suite in easy-to-clean furniture for the nightly sanitization, stocked fridges with beverages, coffee machines and a physio table in each unit.

From the two cafes in the player dining area and also  the suites, every table has its own QR code so players can use their phones to view a menu, order and have it delivered to their table or suite. “It was a first for us, and it worked,” Zausner says.

There will be a distinct reverse “upstairs downstairs” stately home feel as there are three layers to the bubble.

The first level is for all the players, the guests, the tournament management, the referees and the members of the medical team totalling about one thousand people.

In the second level there are the USTA in-house media , no international media will be allowed, and host TV broadcast crews who will distribute television pictures to the planet.

The third level is occupied by all the tournament staff members, security, parking, catering staff, whose interplay with the members of the first level will be minimal.

Similar set-ups are taking place at the player hotel, the Long Island Marriot.The parking lot is now a tented village and players have  fitness area, nightly food trucks and movies shown on a large screen.

The USTA has already seen the first signs of satisfaction from the players success, with some of them posting their experiences on social media and hanging out in the player lounges watching the on-court practice sessions going on below.

Danny Zausner hopes the upbeat mood carries over to the tournament proper with players watching matches.

With the tournament due to start on 31 August, he doesn’t have long to wait.