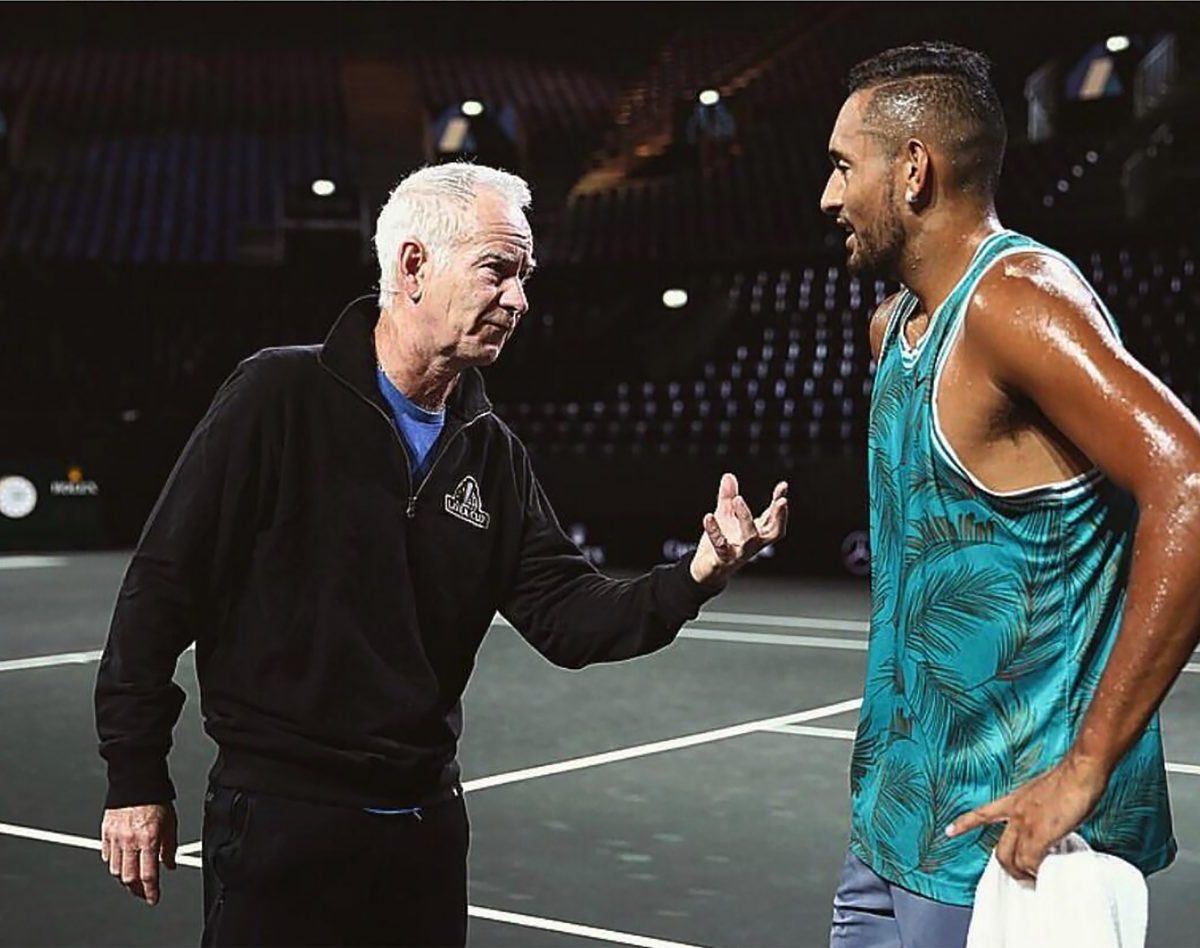 The global pandemic dictates an eerie silence currently exists over the show courts of the tennis world but new speculation about a potential partnership that many believe to be exciting and others regard as terrifying, could shatter the peace.

Only perhaps Ilie Nastase could claim to have as weighty a disciplinary record to rival those belonging to John McEnroe and Nick Kyrgios. But the soon-to-be 74 year-old Romanian is currently banned by the International Tennis Federation from attending all events until the middle of 2021. McEnroe and Kyrgios might easily team up together as coach and player much earlier, and then the sparks would potentially fly.

Indeed Miro Bratoev, the ATP World Tour’s newly appointed vice-president of Rules and Officiating, whose job it is to oversee the maintenance of discipline in the men’s game, might well have a baptism of fire.

McEnroe and Kyrgios have built up a close affinity in the three editions so far of the Laver Cup when the explosive Australian was a key player in the World Team captained by the still argumentative New Yorker. Indeed, experienced Aussie umpire John Blom was subjected to a double pronged verbal onslaught from the pair the second Laver Cup, staged in Chicago’s United Center, in September 2018 (good YouTube footage).

Spectators watched open mouthed as Kyrgios first voiced his displeasure as Blom’s judgment and then McEnroe continued the tirade, adding considerably more volume to the proceedings. It was almost like the apprentice started the job and then the master of the menacing art showed his charge exactly how to go about things.

Kyrgios has effectively played without a coach since dispensing with the services of countryman Todd Larkham a week before the start of Wimbledon in 2015. There was a brief liaison with Frenchman Sebastian Grosjean but nothing changed very much and in the interim many have stated Kyrgios needs experienced advice to help him realise his potential and transition into a Grand Slam champion.

Such luminaries as Lleyton Hewitt, Goran Ivanisevic and Boris Becker have all had their say on the subject and Andre Agassi observed: “To go it alone and not get access to things tried, and lessons learned, is an unforced error. I would imagine that there would be a lot of people that would take a great deal of pride in coaching Nick just based on his talent alone.”

Even McEnroe himself was critical of Kyrgios after an uninspired loss to Andy Murray at Wimbledon a few years ago and said: “He doesn’t understand what it takes to be someone who wins Grand Slams at this level and that is unfortunate. I hope he sees the writing on the wall before this problem gets chronic and irreparable. It’s not just the mental side, he needs to work harder at his game.”

But there has been a marked mellowing of opinion over the years and at last year’s Wimbledon, McEnroe insisted: “Is Nick good for the game? Yes, he’s good for the game. Does he sell tickets? Yes. I can’t handle the fact that he only tries half the time. We can’t support that anymore. I don’t think he should be out there anymore unless he gives an honest effort – that’s my personal opinion.

“The guy would be top five in the world for sure if he was able to do it [give honest effort]. He’s got an incredible – this is my opinion – fear of failure. He doesn’t even allow himself to train hard enough to give himself a chance. ‘You saw what he is capable of when he played Nadal. He was driving Rafa crazy, it was the best second-round match, one of the best matches of the whole tournament. But when Nick plays guys he’s supposed to beat, he doesn’t even show up.”

Earlier this week things appeared to take a massive step closer to a fruition of the partnership and McEnroe chose an interview with SportsSunday in Australia to reveal it would be a ‘no-brainer’ for him to coach Kyrgios. “It’s been difficult for him to understand what it takes to bring out the best in himself consistently,” claimed McEnroe.

“As we all know, for people who are around sports and are athletes, it’s not just about how much talent you have. It’s about how much fortitude you have mentally; what type of fitness you put yourself in mentally as well as physically and how deep you’re willing to get. How far will you go to get the win and do what it takes?”

And talking about Grand Slam titles, McEnroe added: “Nick should have won some already if he had been able to keep his mind on the job.”

There are some marked similarities with McEnroe’s previous coaching engagement, the hard-hitting Canadian Milos Raonic. There are also some glaring differences. Both Kyrgios and Raonic can bludgeon their opponents into submission and possess serves strong enough to win numerous points in the quickest way possible. However, both men, Raonic aged 29 and Kyrgios four years younger, have a worrying susceptibility to injury.

Without doubt the biggest disparity between the pair is a consistency of commitment and the ability to control their temper. The studious Raonic has a willingness to learn, Kyrgios seems positively indolent and aggressively unpleasant by comparison.

McEnroe does not seem put off by the prospect and speaking of working with Kyrgios he said: “We’d probably be at each other’s throats within minutes, but it would certainly be tempting.

“We’ve had these discussions many times, going back over a few years. I don’t know if he’ll be able to do it, I hope he does, because I happen to like him, and it would be great for the game if he did.”

The tennis world has recently been forced to learn the virtues of patience but the end to the current tunnel would appear to be in sight. Now it seems half the sport is waiting in trepidation for a partnership between John McEnroe and Nicky Kyrgios. The other half is enthused by the prospect.