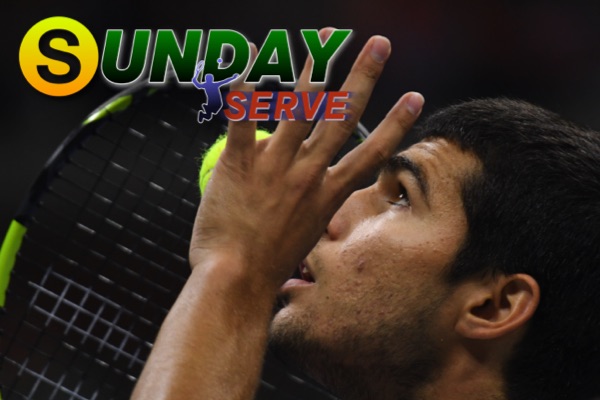 WORLD no. 1 Carlos Alcaraz believes that the future of men’s tennis is in good hands after news of River Federer’s retirement.

With both Novak Djokovic and Rafa Nadal also nearing the end of their careers, Alcaraz predicted that he, Jannik Sinner and Alexander Zverev will be the new kids on the block.

Alcaraz was asked who he thought could potentially make up a future Big Three, along with himself, at an event in Madrid last week.

When questioned further the young Spaniard likened his newfound rivalry with Sinner to that of Nadal and Federer.

“There’s going to be a really nice rivalry with Sinner. Our games are worth watching, and we’re good friends like Rafa and Federer,” he said.

Some might think that being compared to three men that hold 63 Grand Slams between them would add a lot of pressure, but Alcaraz explained that he doesn’t feel that way.

And the ageing Big Three?

“I don’t know why I’m getting compared to the Big Three,” he said.

“They have been there for 20 years, they have won everything and I am starting. It does not make sense, I want to continue my way.”

NOVAK Djokovic is still waiting to hear whether he can return to play in the Australian Open in January after being deported from the country in January because he was not vaccinated.

“It’s really not in my hands right now,” Djokovic, who is still not vaccinated, said at the Laver Cup in London.

“So I’m hoping I will get some positive news.”

Australia has since changed its border rules – since July 6 incoming travellers no longer have to provide proof of COVID-19 vaccinations or even provide a negative COVID test.

The Australian Border Force said after Djokovic’s visa was cancelled “a person whose visa has been cancelled may be subject to a three-year exclusion period that prevents the grant of a further temporary visa.”

But the exclusion period can be waived in certain circumstances.

A Tennis Australia spokesperson said any decision on Djokovic’s visa was not its to make.

SWISS legend Roger Federer said three of his four children cried after he announced his retirement from the game.

Federer has been in London for the Laver Cup, and spoke of his decision at a press conference.

He said that Nadal messaged him last year suggesting they play doubles together again (they played doubles during the first Laver Cup in 2017).

He called his retirement a “bittersweet decision” and told reporters his children took the decision particularly hard.

“They were very emotional. Three out of four cried. They asked: ‘Are we not going to Halle, to Wimbledon, to Indian Wells anymore?’ I said: ‘Not really. But if you want, we can go again.’

The Swiss star said the toll on his body was also starting to wear on his wife Mirka, saying “she really didn’t enjoy watching me anymore, with all the injuries. I felt kind of sorry for her.”

As for the future, he said he would still like to keep playing exhibition matches around the world and might try his hand at media work. ﻿

“I never thought I would say this, but six months ago I suddenly thought: commentating on tennis someday.

“Although I always said I would never do that. But to commentate on some matches at Wimbledon, who knows?”

RAFA Nadal received the Camino Real Award last week from the King of Spain Felipe VI – an award given to those who represent Spain in a positive image in the United States.

“The Award reflects the spirit of recognising a universal Spaniard who has built bridges of understanding between Spain and the United States of America”. Julio Cañero, Director of the Instituto Franklin-UAH said.

“It has been a very complicated year,” Nadal said. “Beyond the injuries, which have been chasing me throughout my career, but also because of the personal and family news, which at this time is very good news.”

WONDER what players spend their prize money on?

Australian star Nick Kyrgios shared a photo to Instagram on Tuesday of the various items of jewellery he had bought for his girlfriend Costeen Hatzi.

She also wore a vintage Alhambra bracelet, worth about $6,000, a Cartier love bracelet with four diamonds, worth $16,000, along with two yellow gold Love rings, worth $2,600 each.

SERENA and Venus Williams’ abandoned childhood home in Florida is going under the hammer next month after a court ruling.

The sisters’ stepmother, Lakeisha Juanita Williams, had allegedly forged the signature of her estranged spouse — Richard Williams — on the mortgage deeds of his four-bedroom, three-bathroom home in Palm Beach Gardens, Florida.

Lakeisha Wiliams borrowed $255,000 from a lender, which she then spent on a failed trucking business.

The home, which has since gone into foreclosure, will go up for auction with a starting bid of $1.42 million.

It is the home where Richard williams trained his tennis pro kids so that they could attend the Rick Macci Tennis Academy and comes with two tennis courts and sits on 10 acres.

Richard Williams purchased the property in 1995 for $355,000, according to property records.

RAFA Nadal, from Mallorca, but where on the Spanish island does he live?

Nadal and his wife live this villa-style mansion in the area of Porto Cristo.

The property was originally valued at four million Euros, bit after extensive renovations and additions, property experts say it is probably worth double that now.

On 7,000 square metres, the property has direct access to the sea, three large living areas and a number of bedrooms, as well offices, courts, a gym and a pool.