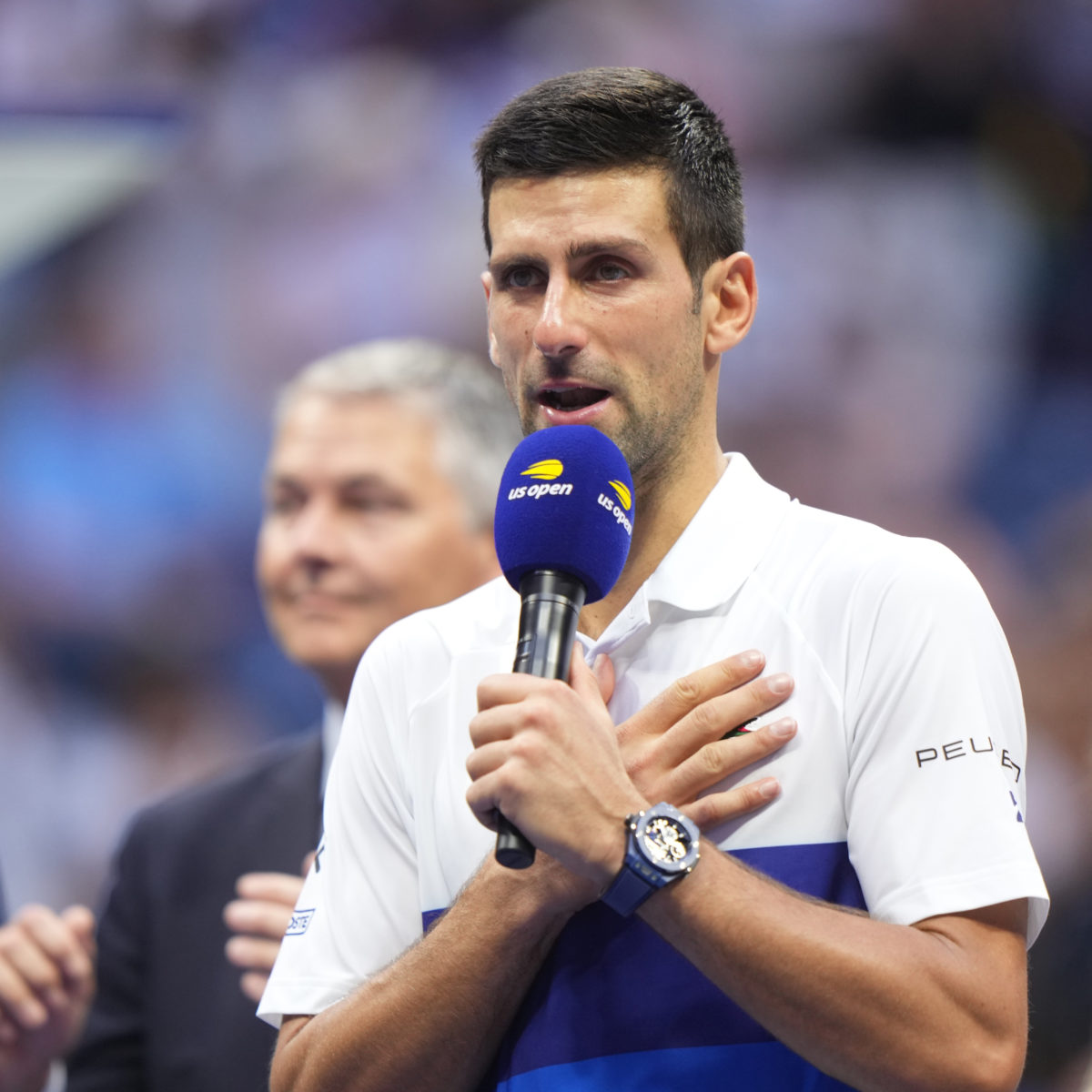 Novak Djokovoic choked back tears on the podium Sunday after a 6-4, 6-4, 6-4 US Open finals loss to relentless Russian Daniil Medvedev, who ended the top seeds’ quest for a calendar year Grand Slam title sweep.

The world No. 1 Serb was “helped” by noisy, rude supporters among the 23,500 in the Ashe stadium whose boos and jeers broke the Medvedev concentration as the second seed served for his first trophy at a major.

Medvedev, leading two sets and 5-2, double-faulted away a first match point and produced another DF a second later.

He lost serve for 5-3 but stoically blanked out more ill-timed screams as he  served again for the win, securing victory in barely two hours after Djokovic pulled to 4-5 but produced a concluding 38th unforced error in the next game to lose.

Defeat denied Djokovic his chance at the first Grand Slam sweep since Rod Laver – in the audience in New York – did it in 1969. The Serb remains locked on 20 Grand Slam singles titles along with Roger Federer and Rafael Nadal.

Djokovic has won the Open three times but has had to settle for six runner-up trophies dating to 2007.

Medvedev revealed that he and wife Daria were celebrating their third wedding anniversary on the day and he had been unable to find time to buy her a gift.

His winner’s cheque for US$ 2.5 million should help.

“This is the first time I’ve been so nervous before my (post-match) speech,” the winner of a first Grand Slam title said.

“I’m sorry for the fans and for Novak, we all know what he was going for today.

“Ive never said this before, but for what you have accomplished in your career, for me you are the greatest player in the history.”

Medvedev who finished with 16 aces among 38 winners, called his first Grand Slam honour “not an easy journey.”

“”But I’m thankful to my team and my family for helping me along the way. Even the fans helped me – it was not easy but thanks a lot,” said the player who two years ago won over hostile locals during his run to a five-set final agiasnt Rafael Nadal.

Djokovic was stung by defeat despite being the favourite of at least the loudest and most distracting voices in the unruly New York crowd.

“Congrats to Daniil, amazing match, amazing tournament. If anyone deserves this title it’s you so well done.”

The sniffling Serb admitted: “I visualised myself in both scenarios standing up here

“Even though I didn’t win, my hearts is filled with joy and I’m the happiest man alive. The audience made me feel very special – this has never happened to me in New York, you touched my heart.”

Medvedev made an impression as he broke in the first game of the match and came within touching distance of inflicting a double break on Djokovic.

Djokovic escaped that fate but was never able to get a grip on the mighty serve of his Russian opponent, always playing on the back foot.

Medvedev concluded the 37-minute opener with his eighth ace as Djokovic to put his stamp on the final as he lost only three points on serve.

The Serb began to crumble in the fourth game of the second set when he failed to capitalise on two break chances and destroyed his racquet with three violent swipes on the cement as Medvedev held, 2-2.

A warning from the chair did not help the top seed’s mood, with the Serb broken a game later as he spewed a volley long; Medvedev twice held to love before collecting  the set on his third attempt as Djokovic erred on a drop shot.

Medvedev wasted no time in breaking to start the third set, sending Djokovic deeper into a hole. The Russian second seed added additional pain as he secured a double break as Djokovic missed a sure thing into the open court, 0-3 as the momentum moved definitively to the Russian’s side.

Djokovic remains on 85 career titles while Medvedev won his 13th.