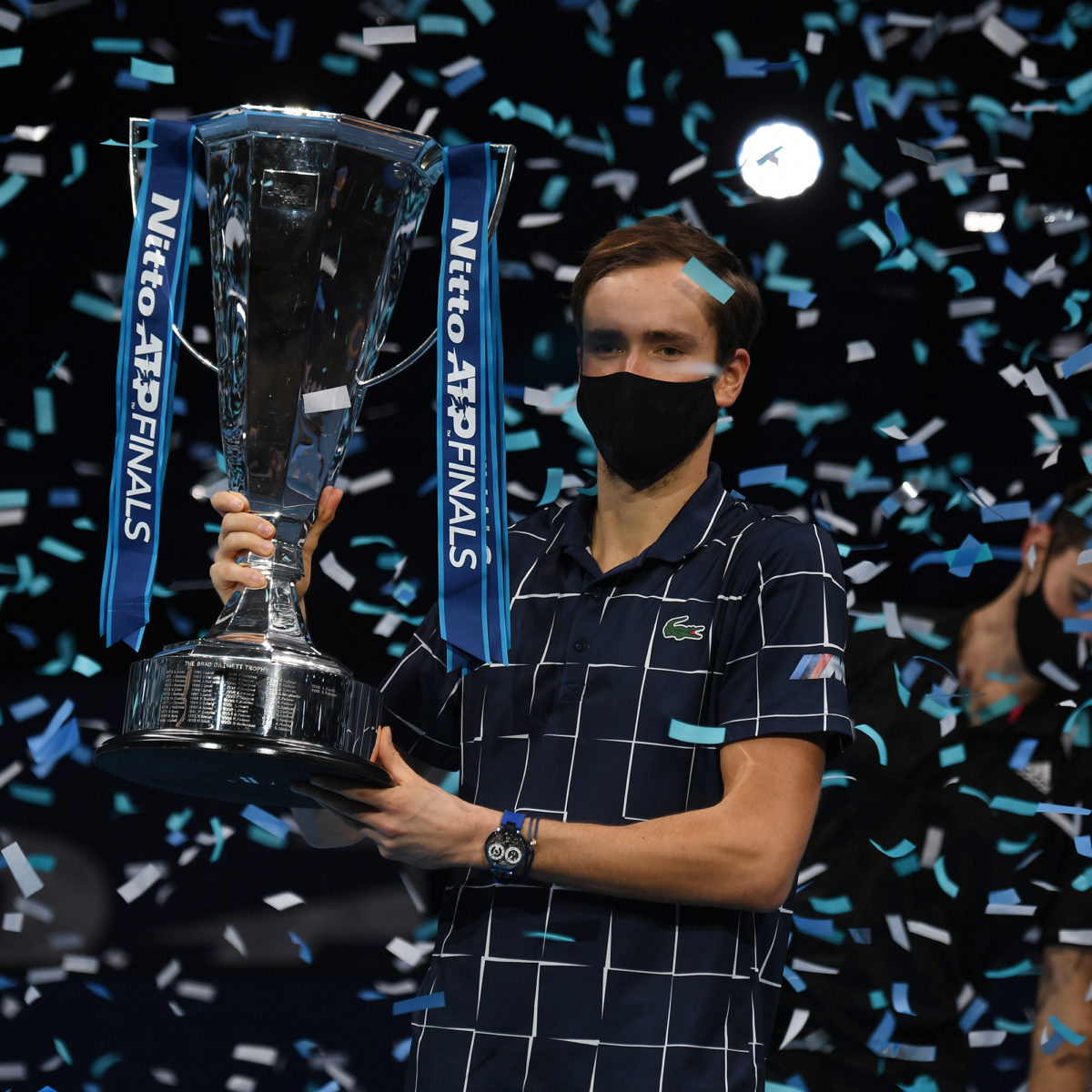 Daniil Medvedev became the first player to defeat each of the world Top 3 during an ATP Finals week, completing his highlight performance with a 4-6, 7-6(2), 6-4 defeat of Dominic Thiem on Sunday to win the year-end event.

The Russian set a record at an O2 Arena devoid of fans due to COVID-19 restrictions by defeating No. 1 Novak Djokovic in group play, No. 2 Rafael Nadal in the semis followed by third-ranked Thiem.

Medvedev’s victory marked the last edition in London after the year-ender moved here in 2009.

The inaugural edition was won by Russian NIkolay Davydenko, with Mevedev bracketing the decade-plus in the capital end with his own wrapup success as the tournament moves to Turin from 2021.

“What a match, it was one of my best victories – two hours 42 against an amazing player,” Medvedev said of reigning US Open champion Thiem.

“Your name is already in the record books, I’m sure we will have many more matches to come.”

Thiem had his chances in the longest final plagued from a dozen London editions. The Austrian’s biggest regret might be the seventh game of the second set, when he had two break points for 5-3.

But the 24-year-old Medvedev saved them both to gather confidence for his eventual victory.

Thiem managed to hold off the other eight break points against his serve from an opponent whom he beat in their US Open semi-final two months ago.

“Of course I’m disappointed, but at the same time, I’m also proud of my performance this week,” Thiem said.

“Dani really deserved it, he played an amazing match. Congrats for the win.

“You had an amazing November winning Paris Bercy and now here. I hope we have plenty of great matches to come.

“It was a pleasure to play today – even if I lost.”

Thiem secured the opening set in 49 minutes with a break in the fifth game as Medvedev double-faulted.

But the Russian lifted his competitive level in the second, saving the key pair of break points for a 4-3 lead as the set went into a tiebreaker.

The No, 4  made an impression in the decider, winning seven straight points from 0-2 down to square the match with an ace at a vast arena left empty by COVID-19 restrictions and quarantine rules.

Thiem was broken to trail 3-2 in the final set, with Medvedev finally converting after his numerous break chances.

The margin was enough to ensure the win on a first match point as Thiem sent a service return into the net.

Medvedev improved to a perfect 10-0 this month in the wake of his Paris indoor title, earning seven wins over fellow Top 10 players.

2019 runner-up Thiem was the first back-to-back finalist at the season wrapup since Djokovic won four straight titles ending in 2015.