Grandslamtennis.online’s  expose into match-fixing in tennis a few weeks back was certainly an eye-opener for many fans, with some wondering how such behaviour could be halted.

One whistleblower is wondering the same after complaining of being ostracised after his attempts to expose criminal gambling in the sport. Marco Trungelliti should be feeling positive. Well, in our book he should. 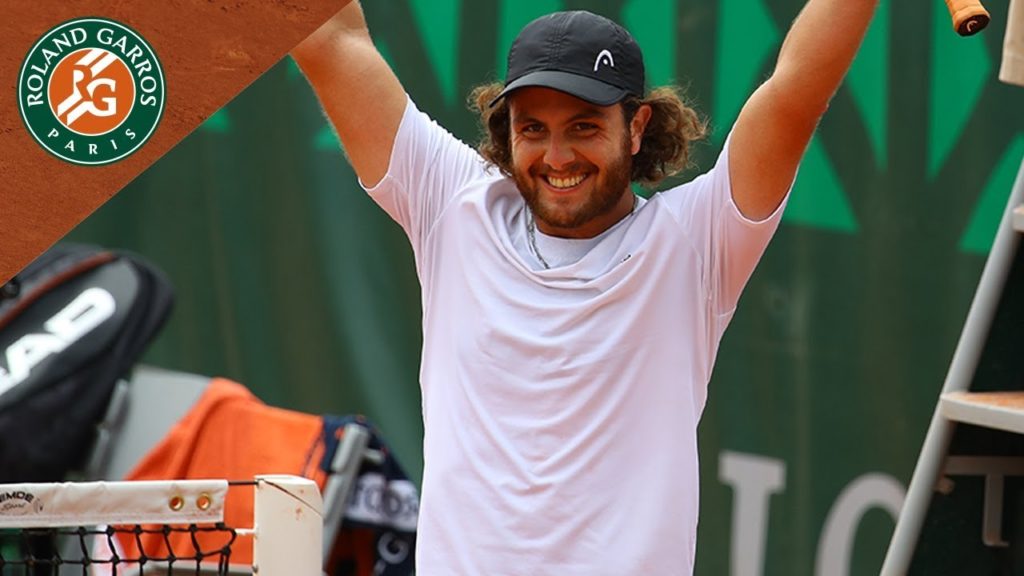 But the Argentine player says he feels his efforts to clean up the game – exposing match-fixing crooks – has cost him.

Ranked No. 139, Trungelliti says he has been rejection by other players and the stress has hurt his health and his game.

And he feels he’s hung out to dry by tennis administrators. He believes many in the game see him as a ‘rat’.

“They just used me,” he said. “They just dropped me in the middle of the sea.”

“It was a disaster, disaster. In my opinion, it was one of the worst procedures that I have ever seen,” he adds. “I’m still paying the price.”

Just before the French Open last year he had been a key witness in a match-fixing probe that snared three fellow Argentines, testifying even though he knew that, back in Argentina, he’d likely face a backlash for doing so.

Nicolas Kicker, at No. 84, was the highest-ranked player convicted.

In the aftermath Trungelliti said he noticed player attitudes changing toward him.

The player has repeatedly tried to contact the Tennis Integrity Unit for assistance, but says he has been ignored.

“Due to my participation in the trial, I receive all kinds of insults from players to managers,” he emailed the TIU last August. “They are trying soil my honour.”

After such appalling behaviour towards hi, you’d expect him to just shut up and get on with his game, but no, he is insistent the corruption is not only still there, but growing.

“It’s not just the players’ problem,” he said. “There are a lot of coaches involved. A lot. A lot. More than we think.”

RAFA is back! Well, we certainly hope so, and after a very promising start to the Monte Carlo Open this week, the Spaniards showed no sign of a knee injury that plagued him at Indian Wells earlier this year.

Nadal told Amazon Prime: “I had great feelings. Always this court is so so special for me.

“I’m enjoying the fact that I have one more time the chance to be playing here in this amazing club.

“I’m just happy for this good beginning to the tournament.”

But Nadal is a perfectionist – you have to be to maintain your standard among the elite of the game – and he knows he can improve.

“I think I did what I had to do. It was the first match on clay in almost a year so I just tried to play solid and dominant with my forehand when I had the chance.”

Nadal will try to be like his great friend Tiger Woods as he builds up for another assault on Roland Garros.

Woods claimed his fifth Augusta green jacket last weekend – 20 years after cleaning his first – and Nadal was quick to praise him.

“If there’s one sportsman I admire outside the game of tennis, it’s Tiger Woods. When he’s at his best, I see in him what I would like to be myself. I like that winning look when he plays, and I like most of all his attitude, his way of facing up to the moments of crisis when a game is won or lost. He might hit a bad shot and get angry with himself, but the next time he squares up to hit the ball, he’s back in focus.”

And for those looking for an omen before heading to place a bet on this year’s events.

The last time Woods won The Masters was in 2005 and soon after Rafa won his first title in Monte Carlo. 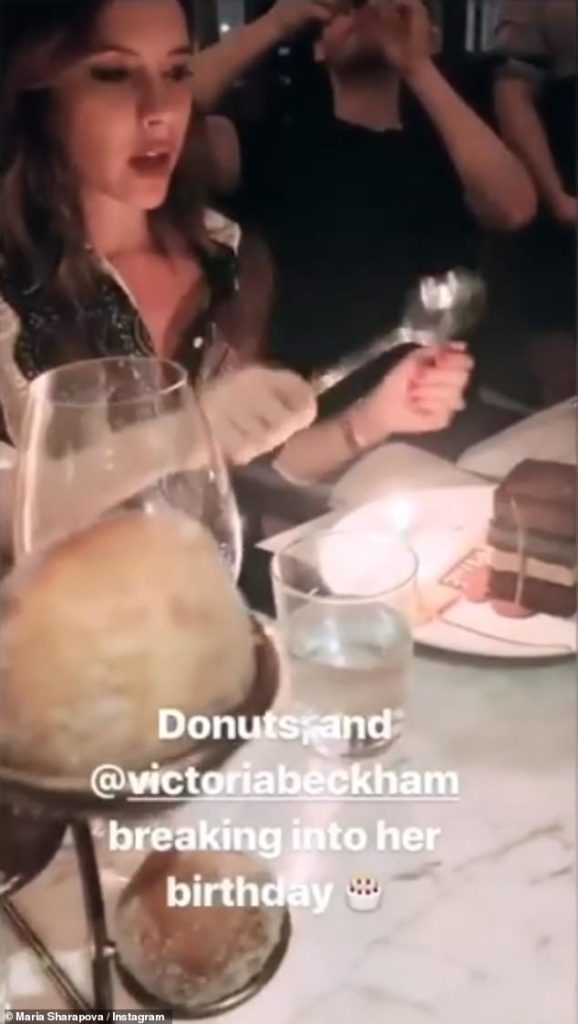 THERE’S nothing like a boat of celebrity clickbait to stir up the English tabloids and this week, Victoria Beckham, ex-singer (debatable), fashion expert (debatable) and wife of former England football captain David (confirmed), teamed up with Maria Sharapova and others to celebrate her 45th birthday in Los Angeles.

Sharapova took to instagram to post a picture of the celebrations and slicing through a four-tiered cake. She captioned the post: ‘Donuts and Victoria Beckham breaking into her birthday.’ 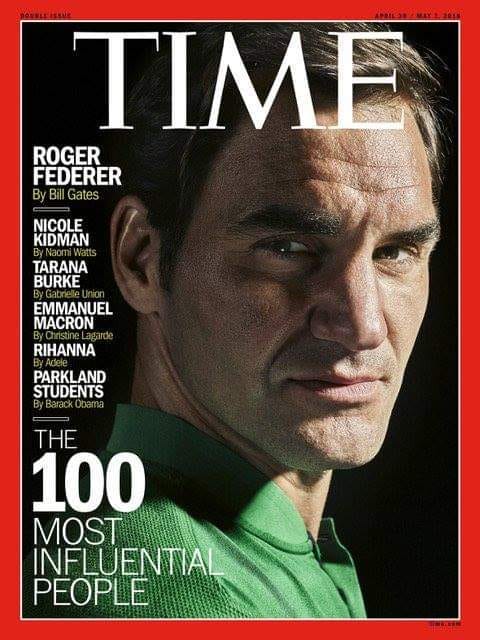 IT’s quite an achievement in publishing circles – Time Magazine’s list of the top 100 most influential people. And the only tennis player to make the grade this year is World No.1 Naomi Osaka.

“Rookie Grand Slam tournament champs often fall short at their next major. All Naomi Osaka did was conquer the world again,” Evert wrote in praise of the 21-year-old.

“If she had wilted, no one would have blinked…She had her U.S. Open moment to fall back on. But no—Osaka controlled her mind and let her superior power do the work. She won another Slam.”

Osaka is clearly a favourite at the magazine. Prior to the Australian Open, she was profiled in a cover story, where she discussed her rise to international stardom after winning the US Open last year.

“You really never know what people can do,” she said at the time.

“And how people can change. I don’t think there is ever going to be another Serena Williams. I think I’m going to be me. And I hope people are OK with that.”

SOUTH African Kevin Anderson and other ex-pat players might be in for a tax shock soon. The South African government is planning to tax ex-pats on their earnings – even though they do not live in the country. And it could hurt – with talk of as much as 45% tax on earnings. Ouch!

SO Turin could replace London as host of the season-ending ATP Finals after 2020.

London has staged the tournament since 2009 and its current deal ends next year. Many thought it would reman in the British capital, but strong bidding from a number of cities make it look likely a change of venue will take place after next year. Singapore, Manchester and Tokyo also bid.

Singapore’s National Stadium was mooted as a possible venue, with ATP representatives visiting in January and given a tour of the 55,000-capacity stadium.

The women’s equivalent of the season-finale, the US$7 million WTA Finals, was staged at the 12,000-seater Singapore Indoor Stadium from 2014 to last year.

The Chinese city of Shenzhen has since won the 2019-2028 hosting rights and also doubled the prize purse to US$14 million.

And Turin? Well, among the factors in Turin’s favour was the Italian government’s willingness to commit about €15 million (S$23 million) annually for five years to the Finals – despite the fact the country is technically bankrupt.

AND finally, Croatian star Marin Cilic reckons he can play until he’s 40 – so long as his wife lets him!

Cilic had a few problems in Australia art the start of the year, notably a knee injury, but speaking in Monte Carlo this week, said the five weeks out has helped and is looking forward to a good European summer.

“My game is based around the baseline, clay court is the most demanding surface physically and also in terms of constructing the point, so you really have to be patient and understand that you will always have to get an extra ball back, comparing to other surfaces,” he said.