SUNDAY SERVE: In the Nick of time 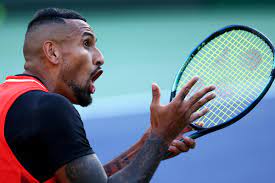 SO, who is the best grass court player in the world?

Kyrgios will sit out the French Open, but has Wimbledon in his sights – and he is gunning for more than the last eight- his best finish in 2014 as 19-year-old.

The Aussie was speaking at an NBA promotional event in Sydney last week and was asked who he thought was best on grass.

Kyrgios hasn’t made it past the third round of Wimbledon since 2016 but said he felt really food about this tear.

“Something about this year has just been different,” he said.

“I’ve played five or six events and I’ve gone pretty well in pretty much every one I’ve played and I’ve beaten a lot of the top players in the world this year.

“I guess it’s more of a resurgence year, just going out there and showing people that I don’t have to go out there and play all the time, [that] I can still be at the top of the game. I’m just enjoying it and doing it my way.

“I play for a lot of people. I feel like I’m very relatable. A lot of kids and people look up to me when I play. If someone like me can make it this far and achieve what I’ve achieved, I think it gives them a lot of hope.”

Kyrgios has recently moved to the swanky Sydney suburb of Kensington, with girlfriend Costeen Hatzi.

Kyrgios was a star performer on Australia’s first floating basketball court in Sydney Harbour, to promote the basketball event.

“You know how big a basketball fan I am,” Kyrgios said. “I saw the first floating basketball court in Australia, so it’s pretty exciting stuff. It just brings everyone together for a good time.”

Emma Raducanu suffered another injury, this time in Rome during the week, as she bowed out of her clash with Bianca Andreescu.

The problem appeared to be a lower back injury, as she called for the physio, saying to the umpire “I can’t move.”

“[I’m] definitely disappointed with how today went,” she said afterwards.

“But I wanted to give it a try. I never really knew how bad it was until I went out there.

“I’m still learning when it’s right to push my body and push through it and when’s not. I guess that’s something I’m learning at these tournaments.”

And she added: “Of course I want to play every opportunity I have, and probably even when I shouldn’t.”

“But, you know, I just really need to be sensible. Sometimes I feel like I need a voice to, you know, just hold my hand, Do this, do that.”

NO Becker for Paris, but who is Mischa Zverev?

Eurosport issued a statement On Wednesday: “In Mischa Zverev, we have an expert who is not only close to the action but who has already worked for Eurosport during the Grand Slams and also for the entire Tokyo 2020 Olympic Games tennis tournament for Eurosport. He knows both our team and the processes.”

Zverev will lead ‘Matchball’, formerly ‘Matchball Becker’ with commentator Matthias Stach throughout the second Grand Slam of the year.

“It will be two intensive weeks of tennis with high-level matches,” Zverev said.

“I don’t just want to explain to the spectators the small details that can often make a big difference, but also convey their enthusiasm for tennis.”

The British Government’s Early Removal Scheme could see Becker sent to Germany in November to see out the remainder of his sentence.

And Becker is ‘confident’ of being out of prison before Christmas.

A source told a Uk newspaper: “He’s very confident he’ll be back in Germany well before Christmas.

NAOMI Osaka has started her own sports agency.

Osaka and her agent Stuart Duguid have set up the Evolve agency.

“I’ve spent my career doing things my way, even when people told me that it wasn’t what was expected or traditional, Evolve is the natural next step in my journey as both an athlete and businesswoman,” Osaka said.

Osaka sees this venture will allow her to grow her current business portfolio from an estimated $50 million to $150 million a year.

JUDY Murray is to make her Edinburgh Fringe debut this year.

The mother of Jamie and Andy will be co-hosting a chat show at the event with her ‘other son’, Duncan, played by comedian Chris Forbes.

The pair have previously made a series of amusing online videos attracting more than three million views.

“It has been quite odd. A lot of people think Duncan is real,” Forbes did.

“While that is quite concerning, it is also quite sweet. People have really taken this fictional being to their heart. It’s nice to see that people will care for somebody even though he doesn’t exist.”