Sunday Serve: A week in review 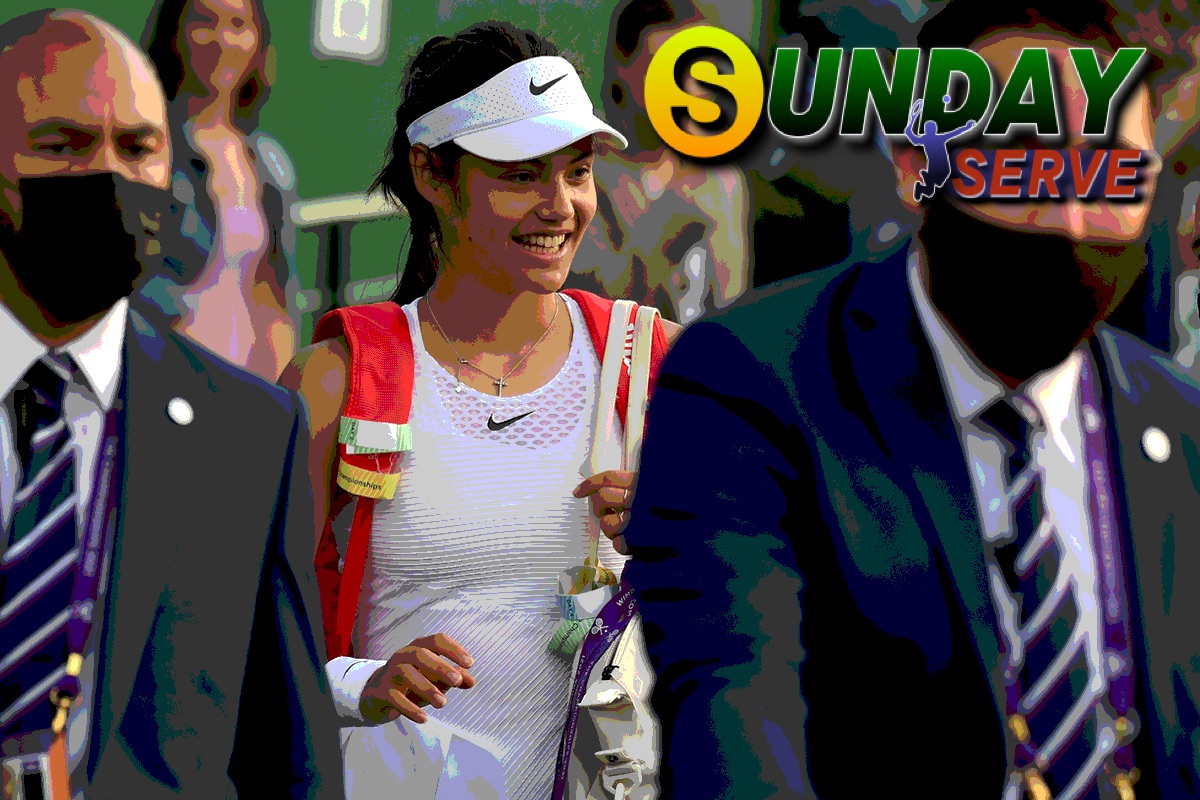 YOU have to feel sorry for organisers of the end of year indoor tour events.

Loss of form, injury and end of year burnout contributes to withdrawals and a general lack of interest from many players, who, are now looking a little further ahead to the start of the 2022 season in Australia.

Apart from the WTA and ATP finals, an exhibition match at London’s Royal Albert Hall in a couple of weeks time and a payday in Abu Dhabi just before Christmas, the 2021 season is all but over.

2021 has been a long year – for everyone – so for many players it is a time to step back, recuperate and plan a pre-season regime ready for Melbourne in January.

Emma Raducanu is just one who must be relieved 2021 is coming to an end.

Raducanu, who has become the face of British tennis and the darling of millions, will be looking for some privacy now as she plots a pathway into 2022 with new coach Torben Beltz.

Her drop in form since New York has seen critics suggesting Flushing Meadows was a flash in the pan.

So behind-doors training sessions may be the answer.

Beltz knows how to get a player fit and then how to win.

But, let’s not forget Raducanu is still only 18, with plenty still to learn.

NOVAK Djokovic and Daniil Medvedev are quite rightly the clear favourites at this year’s ATP Finals.

The 2021 ATP Finals in a new venue win Turin, Italy sees four previous champions among its competitors, but Djokovic, with five year-end titles, is still the odds-on favourite.

while Medvedev, Alexander Zverev and Stefanos Tsitsipas all have one each.

While Djokovic and Medvedev are favourites, donlt completely write off Matteo Berrettini, who was this year’s Wimbledon runner-up to Djokovic.

And Tsitsipas, who lost to the Serb in the Roland Garros final.

ITALIAN state broadcaster RAI scored a massive own goal during the FIFA World Cup qualifier between Italy and Switzerland last week when it advertised the upcoming ATP finals clash between local hero Matteo Berrettini and the world number 3 Alexander Zverev.

Instead of an image of Sasha they ran an ad with a picture of older brother Mischa, currently sitting at No. 256 in the ATP rankings.

Two years and a pandemic later and all has changed.

Turin this week will offer $7,250,000 in total prize money – half of what was initially offered.

AND staying on ATP Finals … Matteo Berrettini will carry the hopes of Italian fans in Turin, which begins at the Pala Alpitour today, where he is hoping for some fierce partisan support.

“It means a lot. It’s one of the best events that we have on Tour and to have the chance to have it in my country is something unbelievable,” he told media this week.

“At the beginning of the year, it obviously a big goal, but it was too soon to even think about it. Then match by match, i think I earned it and I am really happy to be here.”

ENGLAND rugby coach Eddie Jones was taken completely out of context by many critics last week, after suggesting Emma Raducanu’s results had suffered from off-court “distractions”.

Jones cited the British teenager’s poor form to to illustrate his view of one of his own young rugby players, Marcus Smith, and the dangers young sports stars face once in the sporting spotlight.

“There’s a reason why the young girl who won the US Open hasn’t done so well afterwards,” Jones said after the Twickenham match.

“What have you seen her on — the front page of Vogue and Harper’s Bazaar or whatever it is, wearing Christian Dior clothes. All that is a distraction around her.”

Jones was criticised by former British tennis star Jo Durie, among others, for his choice of words.

So on Thursday he told the BBC in London:

“The whole point was how difficult it is for young players to cope with distractions.”

“So the point I made was not wrong. I can’t control it if it’s taken out of context. There was no criticism of Emma,” the Australian added.

“I have sent her a letter just to reinforce that and hopefully we’ll see her at Twickenham shortly.

“I don’t have any misgivings about what I said — I am disappointed it was taken out of context, and I would be disappointed if Emma was upset by it.

“It was deemed as being sexist and that was never the aim of the point.”

THE WTA finals has again thrown the rankings into disarray with both Anett Kontaveit and current world No. 10 Paula Badosa performing so well at the Guadalajara event.

Badosa, who like Kontaveit, has has a meteoric rise this year, dictated play against favourite Aryna Sabalenka in her opening match to send the No.1 seed tumbling.

But it wasn’t all domination, as she admitted after after match.

“In that moment maybe I was playing a little bit waiting what could happen and didn’t want to miss,” Badosa said. “Sometimes the more you doubt in these conditions, the more you miss.

“I wasn’t happy with my service game. I said to myself, ‘OK, now you have to be as her level, aggressive, because she was being very aggressive.’ I wanted to play against her.

IT’S been a tough year for Andy Murray – especially the first six or seven months, but he can see some light now with improving form in recent events.

Murray’s season ended in Stockholm this week with a loss to eventual winner Tommy Paul, but he’s already plotting for 2022.

With new Spanish coach Esteban Carril working with him, expect Murray to be ready for the rigours of Australia in January.

But could this mean a reduced role for coach Jamie Delgado?

Or can the pair work together to give the former world No.1 some glory in the sunset of his career.

“My game has not been that great in the matches that I’ve played but I’ve still been very competitive,” Murray said this week.

“That is really positive because there is no doubt I can play better.

“My game will improve over the off-season. I’m pretty clear on the things I need to work on.

“I need to make sure we get a good plan in place, that come the beginning of January those improvements have been made.”

Quote of the week:
“I think we forget sometimes that she’s only 20 years old.”

Maria Sakkari on Iga Swiatek as the latter was in tears after her WTA Finals loss tom the Greek player.