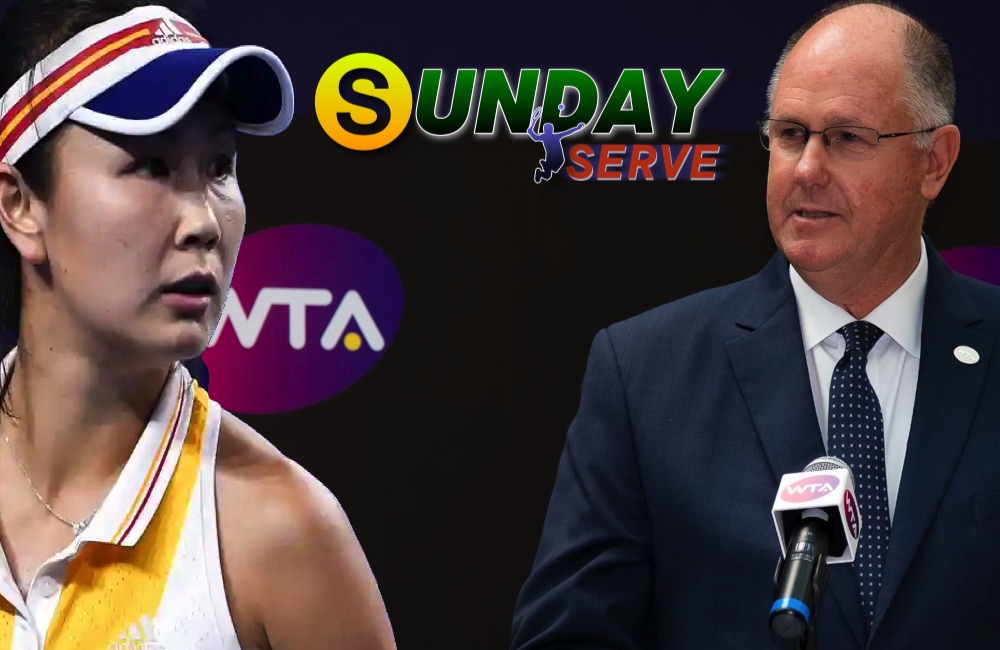 Sunday Serve is Grand Slam Tennis’s weekly look back in an offbeat way, at who’s hot in tennis, or what is making the news.

And as this is the last ‘Serve’ of 2021, we were looking at who we could make our first Sunday Serve person of the year.

It didn’t take long to make the call… Steve Simon of the WTA. Why? For standing up to the might of the Chinese propaganda machine when others backed away.

Simon served it up to the Chinese Government after doubles champion Peng Shuai went missing last month, and the subsequent web of online deception that followed from the communist regime.

Simon stood up and quite rightly cancelled all event in China, for the first half of 2022 at least.

Let’s remind ourselves briefly of the story… On November 2 Peng Shuai published allegations that she had been sexually assaulted by a top Chinese government official.

Immediately, all mention of her on Chinese media disappeared, as did her original post and allegations, and she became impossible to contact.

After many unsuccessful attempts to contact her, Peng resurfaced in several brief, choreographed settings in China in a controlled attempt to kill off the story.

But Simon was not convinced.

And recent analysis of the Government’s posts and subsequent propaganda has cast further doubt on the validity of the posts.

On December 3 the Simon announced the immediate suspension of all WTA tournaments in China and Hong Kong.

“None of this is acceptable, nor can it become acceptable,” Simon said.

The WTA’s stand was, and still is, in contrast to the position of the weak International Olympic Committee, who is still trying to protect its financial interests with the Beijing 2022 Winter Olympics kicking off in a couple of months.

THE Mubadala World Tennis Championship in Abu Dhabi have proved to be fertile ground for the Covid virus, with Canadian Denis Shapovalov the latest to test positive.

Shapovalov, who arrived in Sydney on Thursday to prepare for the4 ATP Cup, said he was experiencing just minor symptoms and was hoping to return to the court when safe to do so.

Others from the Middle East event to test positive include Rafa Nadal, Belinda Bencic and Ons Jabeur.

FORMER world No. 3 Milos Raonic is the latest to withdraw from the Australian Open.

Raonic has been plagued by injuries throughout his whole career but he hasn’t missed the Australian Open ever since he debuted at Melbourne Park in 2011.

Raonic made the semifinals in 2016 before losing to Andy Murray in five sets.

ELINA Svitolina will jet out of Switzerland tomorrow for Adelaide via Sydney.

The Ukrainian star was critical of the Covid-19 vaccine earlier this year but having seen lots of friends contract the virus now has a different tune.

“Even if they tell me that I have to get a third shot, I would be happy to do that, because I see now so many new cases – and lots of players,” Svitolina told Sydneys’s News Corp last week.

“Lots of our friends are getting Covid, so it’s quite tough right now.”

Svitolina is travelling with husband, French tennis player and former world No.6 Gael Monfils. Both plan to be in South Australia for two tournaments before heading for Melbourne.

The accounts show the company has total assets of £26.68 million which include almost £14.9 million held in a bank account, more than £8 million owed by debtors and a £3.6 million ­investment portfolio.

Murray also wants tennis to follow produce a behind-the-scenes Netflix series similar to the F1 show Drive to Survive, to boost the sport’s popularity around the world.

“I would be open to a similar docuseries in tennis because I think that there is huge benefit to the sport,” Murray told Eurosport.

“I don’t think tennis is open enough to allow access like that. It’s a difficult one because, yeah, it’s brilliant.”

So who would be be the villains in a tennis related Hamilton-Verspappen scenario? Over to you!

SAD to read that Former world No. 1 Arantxa Sanchez Vicario is facing a four years in jail for alleged fraud.

The allegations stem from the time when she worked with former husband Josep Santacana, where she is alleged to have moved her assets to avoid paying a $5m debt to Banque de Luxembourg.

The Bank had been claiming a multi-million Euro amount since 2010, according to Spanish newspaper El Pais.

Sanchez Vicario won of 29 WTA titles during her career, earning over $17m.

TALKING of tennis finances… Wimbledon made a $58 million profit in 2021, despite the Covid-19 pandemic.

With reduced crowds and hotel costs for players, the third Slam of the year was still profitable, although $9m less than in 2019, where profits reached $67 million.

The Lawn Tennis Association will receive the majority of the profits, but it was also announced that the British game will receive a $29 million bonus from the UK Government.

This money is primarily to be used to build new grass courts facilities in the wake of Emma Raducanu’s US Open win.

UK estimates revealed that in the months after Raducanu’s triumph, an estimated 100,000 Brits picked up a tennis racket, a 119 per cent increase from the previous year.

Tennis Australia last month announced that they suffered a loss of $US 71 million as a result of their delayed pandemic-hit Slam in February.

“In many ways, it was a bit unfair to Novak. He said his medical information was private and confidential. He’s won the Australian Open nine times, which is truly remarkable. Of his 20 Grand Slam titles, almost half have been won here,” Tiley told media last week.

“I spent a lot of time with him… I fully understand his point of view, his medical situation is personal and he has the right to keep it to himself.”

World Cup-winning French footballer Kylian Mbappe is a Rafa Nadal fan, recently lauding the Spaniard for his longevity and consistency in the game.

“Do I still have idols? I no longer have idols, but I still admire those who have marked the history of sport, including in other disciplines. I know what their exploits represent in terms of sacrifice, of effort,” Mbappe told Paris Match.

“I watch basketball and tennis a lot,” Mbappe said. “At Roland Garros, where I love to go, I had the opportunity to chat with Roger Federer, Rafael Nadal.

“I admire these champions who have been able to stay on top for many years. It’s not for everyone to have such consistency.”

AND finally … we couldn’t end the year without a word for the current darling of the game, Emma Raducanu.

After signing deals with Tiffany, Evian and Dior – the teenager will be flying high after joining the British Airways family as “global brand ambassador”.

The 19-year-old announced the deal on social media, writing on Instagram that she was “thrilled to join the British Airways family”.

“The airline has already been part of a special time for me, flying me home from the US Open” and said: “I look forward to working with the iconic British brand on some exciting projects,” she added.