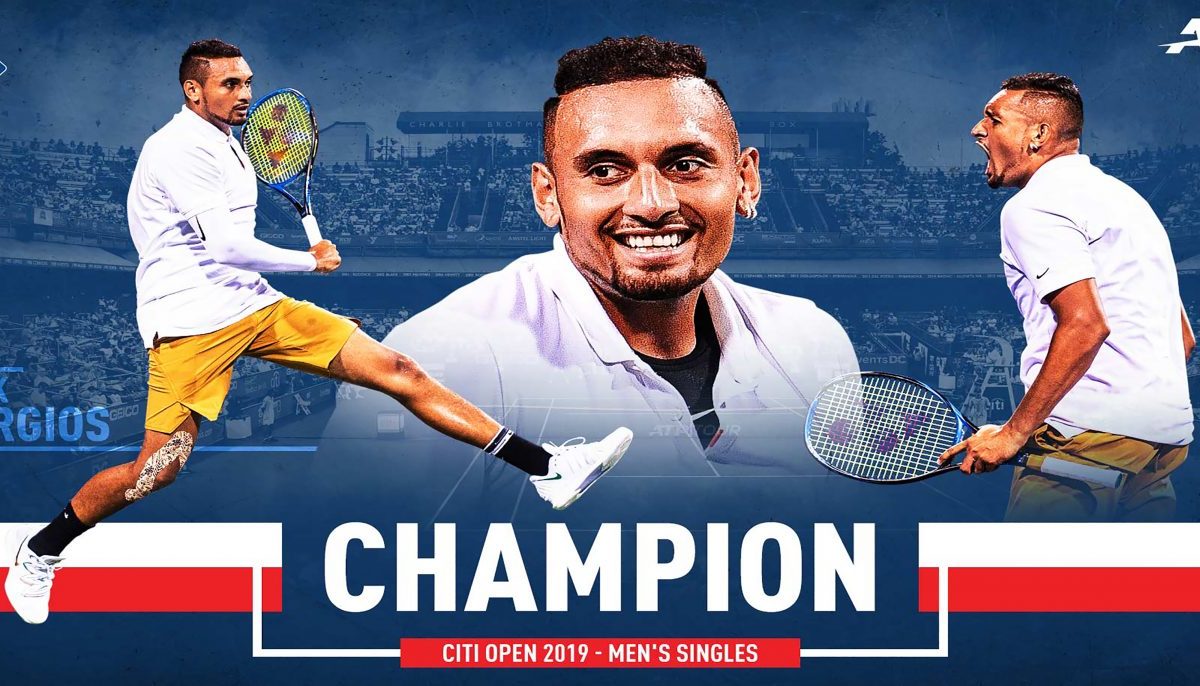 Mercurial showman Nick Kyrgios used all of his extensive repertoire of tricks to wow the Washington crowd and pick up his second ATP title of the season  the Citi Open, beating third seed Danilil Medvedev in two hard fought tie-break sets.

Neither player faced break points during the match and it was Medvedev who had the first set point opportunity on the Kyrgios serve, but despite suffering back spasms, the Australian fired down one of his eighteen aces and went on to take the breaker 8-6, having been 2-5 down.

For good measure Kyrgios threw in an underarm serve and, as he had done in the previous three rounds he solicited advice from the crowd where he should deliver the match winning serve, which he duly did wrapping up the match in 94 minutes.

It was the enigmatic Aussie’s sixth career ATP title to date and also gives him an impressive 5-1 record over top 10 rated players this year.

The win takes him back into the comfort zone of the top 30.

Kyrgios also needed help from his dad Georgios and Washinton Citi Open event owner Mark Ein as due to his recent racquet smashing antics, a charitable donation, and a miscalculation he was down to just one match racquet the day before the final. Georgios Fedexed five replacements from Canberra and the tournament owner Ein managed to extricate them from customs at Dulles airport in timely fashion and delivered them on site at 10 am on finals day.

Most tennis fans, and several of his ATP colleagues have opinions to express about the enigmatic Aussie, none less so than friend and two time Wimbledon Champion Andy Murray who told the ATP tour a few days ago:-

“As someone who knows him well, I like him. I just want to see him do that all of the time. I don’t like it when he doesn’t try as hard as……. and I have behaved badly myself, so it would be hypocritical of me to say that I am an angel.”

Everyone matures at different ages,” Murray added “Some people are ready when they are 18, 19 to deal with what comes with being a top athlete and some people aren’t ready and it takes them a bit of time. I’m hoping that with time Nick will learn and be better for it.”

Speaking on Amazon Prime Kyrgios said: “It’s amazing. Where I was six months ago, some of the things I was doing, to respond like this having incredible support, it’s amazing.

“I’ve proved to myself and a lot of people that have backed me that I still have it. It’s been one of the best weeks of my life from a tennis perspective.”

Kyrgios heads for Montreal this week for the Coupe Rogers where he will face a tough opening match against Britain’s Kyle Edmund, and if he comes through that, a quick re-match with Medvedev.