Show us the money! 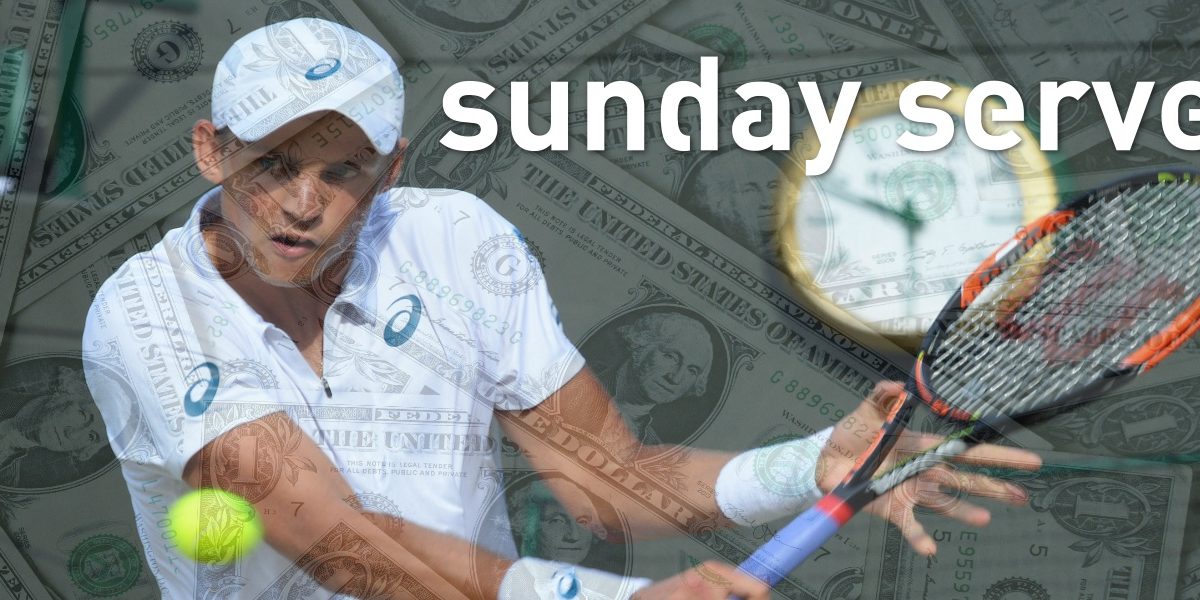 Money, money, money – that’s the talk of the tennis world this week after rumours of a growing row over match payments emerged in the New York Times.

Players, according to the newspaper, are up in arms about prize money, and a group, including Novak Djokovic and Sloane Stephens, are attempting to push the four Grand Slam tournaments to commit a greater percentage of their revenue to the players.

The group are led by Canadian veteran Vasek Pospisil, but it is believed lack any support from either Roger Federer or Rafael Nadal.

The group wants more transparency from the major tournaments about how they determine prize money. The group wants a regular seat at the negotiating tables very soon, and above all, it wants not just another pay raise, but a significantly larger slice of the pie.

The group are pushing for a seat at the TV rights negotiation table with Pospisil saying its not their goal to enrich the big stars, more to increase monies for the lower ranked players.

But Grand Slam execs are not biting, refusing to engage with the group, as Wimbledon chief executive Richard Lewis said: “To say only the Grand Slams should be targeted is just not right.”

Pospisil is angry over talk the USTA reported just over $380 million in US Open revenue last year but paid out $53 million in player compensation.

That amount, the NY Times reported, amounted to just 13.94 percent of the total.

“I just can’t believe this is the number,” Pospisil told the NYT in an interview from China last week.

“It’s not fair. They have to figure out how to do their business another way, but they have to compensate the product fairly.”

Gordon Smith, chief executive of the USTA, believes they have listened to players’ concerns and acted, but Stephens disagrees.

“Regardless of the number, the bottom line is that we players just want to make sure there is a fair distribution of revenue,” Stephens said.

“That debate is never-ending, but with more information and understanding on both sides, the players and the tournaments can be well taken care of.”

Only US Open and Wimbledon had so far responded, both rejecting direct negotiations.

Craig Tiley, the Australian Open’s tournament director, said that Tennis Australia intended to respond but was also not eager to negotiate with various individual player groups.

Tiley added the long-term goal was to increase prize money to US $67.5 million but couldn’t give a timetable. Prize money this year was $62.5 million

Pospisil may have a point, but fractured player group demands will not get far with tournament organisers.

And maintaining player solidarity has proved difficult. The last major boycott of a tournament was at Wimbledon in 1973, when 81 men, including Rod Laver and Arthur Ashe, chose not to play as a show of support for Niki Pilic, a Yugoslavian player who had been barred from Wimbledon after deciding not to play in the Davis Cup.

Without the support of many key big-name stars, including influential figures like Federer and Nadal, the demands look like falling on deaf ears … for now.

The group of Indigenous youth participate in tennis programs year-round in Far North Queensland. Barty and Goolagong Cawley joined the players on court for a tennis lesson at Edmonton Tennis Club before heading to Bentley Park College to be part of a Wuchopperen Deadly Choices Healthy Lifestyle seminar and take part in an ANZ Tennis Hot Shots workshop with students from the school.

“This has been the most magical day, I couldn’t think of a better way to spend time within the community. To see all of these happy faces, particularly the young kids and how much they enjoy it, that’s what brings a smile to my face,” Barty said.

“Getting to do things like this; an Indigenous tennis trip with Evonne Goolagong Cawley, how incredible is that? It’s been a special opportunity to bring so many people together and to talk through my tennis and my heritage.

“Being able to give back is so important to me, these are the trips I love the most,” Barty continued.

“I felt so proud when the kids were so surprised to see Ash, it put a big smile on both of our faces. I just know how much they would’ve appreciated this moment, some of them were completed stunned and didn’t know what to say, but as soon as Ash started talking to them, they felt relaxed because Ash helps put people at ease,” Evonne Goolagong Cawley said.

STAYING in Australia. Alicia Molik is confident about their chances in the Fed Cup final against France in Perth on November 9-10.

“I hope my greatest Fed Cup memory is around the corner in November in the final against France,” Molik said.

“We want to win the Fed Cup and know how to do it. For our players, it’s about being resilient under pressure and accepting the tough moments.

“I see the final as a continuation of our Fed Cup year. We don’t need to change – we need to hold ourselves to the same standards and not reinvent the wheel because it’s the final. It’s a privilege and we have earned the right to be there.

Winning the Fed Cup would be special – and with perfect preparation must come perfect celebration! It would mean each team player has achieved something historic for the rest of their lives. They will forever be part of this special group. Australia is seeking its first Fed Cup crown since 1974.

ANDY Murray says he will take a brief break from tennis as he and his wife await their third child.

The two-time Wimbledon champion is planning a month-long break after next week’s European Open but is ready to leave Antwerp early if Kim, 31, goes into labour.

He told The Times: “Obviously the baby can come any time from pretty much next week.

“I would adjust my schedule if I couldn’t go to Antwerp.

“My plan is to play Antwerp and then I am done through to the Davis Cup.

“If the baby came early, I would miss Antwerp and then maybe play at the Paris Masters.”

DRIVEN to distraction? Maybe. But Nick Kyrgios is back in the news over another crash scene – this time for real.

His $300k Dodge Demon muscle car crashed into power pole in Canberra yesterday – no one hurt – and apparently Nick wasn’t driving either.

But may hav been a passenger, as details remain sketchy as to who was, and how the incident occurred.

Kyrgios’ ‘friends’ were, say the Sydney Telegraph, ‘Milling around the wreckage’. The super car is one of only four in Australia.

AND Finally … New US Open champion Bianca Andreescu has revealed what she told Serena Williams after their US Open final last month.

“I’ve watched you your whole career. You’re a freaking beast,” she told Williams.