She did it her way 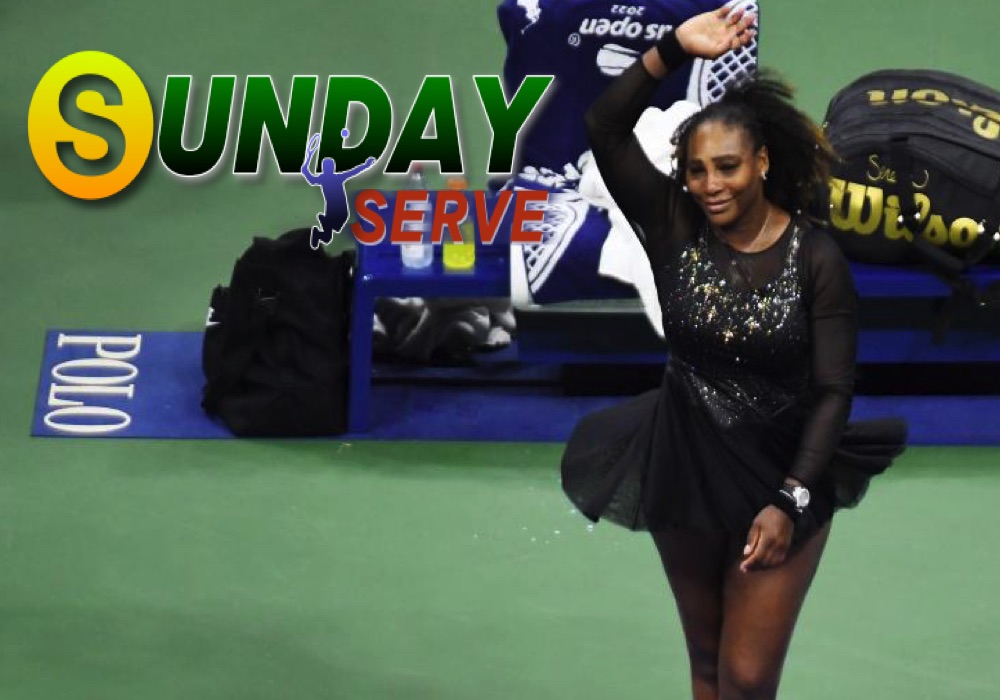 WHO would have thought the words of Frank Sinatra would signal the end of an illustrious tennis career, but… now, the end is near.

Serena Williams took what is very likely the final step on Friday night, losing a 7-5, 6-7 (4), 6-1 to young Aussie Ajla Tomljanovic at the US Open.

‘And so I face the final curtain…’

On the same stage that saw her win her first major back in 1999. On Friday night there was not a spare seat in the house – all 26,000 taken at Flushing Meadows.

“It’s been the most incredible ride and journey in my life,” Serena said after the loss.

A magnificent career, 23 grand slams – for a kid from the back streets of Compton, LA.

Of that she can certain.

Only bettered by Margaret Court in the history of tennis.

‘I travelled each and every highway…’

New York, Paris, Melbourne and London – with few stops along the way to pick up a trophy here and there.

As she departed Arthur Ashe Stadium, probably for the final time in a singles match, the whole stadium rose as one to applaud.

A PRIME seat at the Friday night match cost about as much as a year’s salary for the average American.

Secondary-market ticket exchange StubHub was offering a seat in Section 101, which offers an “unrestricted view” of the court for $48,500.

Adam Budelli, from StubHub, said that ticket prices had increased by 75 per cent for Wednesday’s match and sales for her next match soared 50 per cent again.

The “Serena Effect” also paid off for US Open broadcaster ESPN.

Her Monday night match against Montenegrin Danka Kovinić attracted 3.2 million viewers – the most watched US Open first round ever.

HER opponent, Aussie Ajlna Tomljanovic, girlfriend of Italian Matteo Berrettini, tried to play down her part in the showstopper of an event.

“I’ve been a Serena fan since I was a kid, on Friday night I’ll just be a competitor and I’ll try my best to win.”

And that she did.

But the nicest part of the farewell was probably her words of thanks for parents Oracene Price and Richard Williams, husband Alexis, daughter Olympia, and elder sister Venus, with whom she played one last doubles match on Thursday.

“She’s the only reason Serena Williams ever existed.”

During the second-set tiebreak against Tomljanović, Williams’ mother Oracene Price, appeared to nod off.

As Williams fought to stay in the set cameras panned to Price. Resting her head on her hand with her eyes closed, she seemed oblivious to what was happening around her, before finally opening her eyes.

SERENA’S husband Alexis Ohanian is known for wearing shirts supporting his wife but on Friday night it was daughter Olympia in the spotlight.

During Williams’s first match on Monday the entrepreneur wore an image of Olympia on a T-shirt.

SO, on to more pressing matter and the US Open’s other competitors…

Australian tennis fans loved seeing Anja Tomljanovic outlast Williams on Friday night – but were not very happy with the partisan home crowd who booed the Aussie every time she won a point.

Tomljanovic showed mental resilience beyond her years to shut out the biased pro-Serena crowd.

But the behaviour of the supporters was called into question by many.

‘Wow. US Open crowd cheering when Tomljanovic serves a fault. Pull your effing heads in,’ posted one fan.

“Disgusting. Even when she missed a first serve, snd getting booed for complaining for the noise between serves. Typical American crowd. Lets go Ajla,’ another wrote on social media.

“Yeah, all the rent a crowd are in the stadium. And normally don’t support tennis, another wrote.

ALEX de Minaur tore himself up after losing in five sets to Spaniard Pablo Carreno Busta on Friday.

The fifth through went the way of Carreno Busat, as de Minaur smashed his racket into the court, disgusted with himself after losing the deciding set.

“Look, honestly, I didn’t even give him a chance to miss. That’s where I see it,” de Minaur said.

“I was finding it hard to make a ball in the court and that’s something that I can’t give a reason for. It was just one of those days.

“I’ll just try to put this behind me as quickly as I can and be ready for the next events.”

Who takes their dog to a tennis tournament – in its own dog stroller?

Well, it is New York!

Forget performances on court – how about this beer drinking woman, spotted on camera during the Felix Auger-Aliassime and Roberto Bautista Agut battle in Louis Armstrong Stadium.

The woman wasted no time in raising her beer glass to her lips and downing the drink in a matter of seconds.

The crowd went wild, everyone had a laugh, and the action on court resumed.

But it didn’t end there … the cameras returned in the fifth set of the match, and the young lady delivered again as she grabbed the beer out of her friend’s hand and sunk it in one!