Serena Quite The Fashionista

AT 37, it would be wise for any sports star to be planning for a life outside the highly competitive nature of the game – so it is no surprise to read of Serena Williams doing just that.

“For me, it’s important to have something beyond tennis because I have always planned on it,” Serena said this week, as it emerged she was already working toward a life beyond the court.

“My dad was like, ‘You can’t just play tennis forever,’ even though I kind of have.”

Williams has not announced any plans to retire, let’s get that straight. But she has reached an age when many tennis players end their careers.

Historically, we are told, tennis players tend to retire between 30 and 35, although some end careers as late as 40.

And, at 37, the legend of the women’s game boasts an astonishing 23 Grand Slam titles.

So now Serena is planning her life post tennis – well, post competitive tennis – and it comes as no surprise she is looking at a career in fashion as the next step in her life.

During her career we’ve witnessed some of her fashion ‘statements’. The frilly tutu, some crop tops, and that figure-hugging jumpsuit in Paris last year.

“When I went to fashion school, it was always something I wanted to do in the future,” Serena told reporters this week.

“[But] it wasn’t something that was done — like you can’t focus on two things. But I really liked fashion and wanted to learn, and I didn’t want my career to stop.” 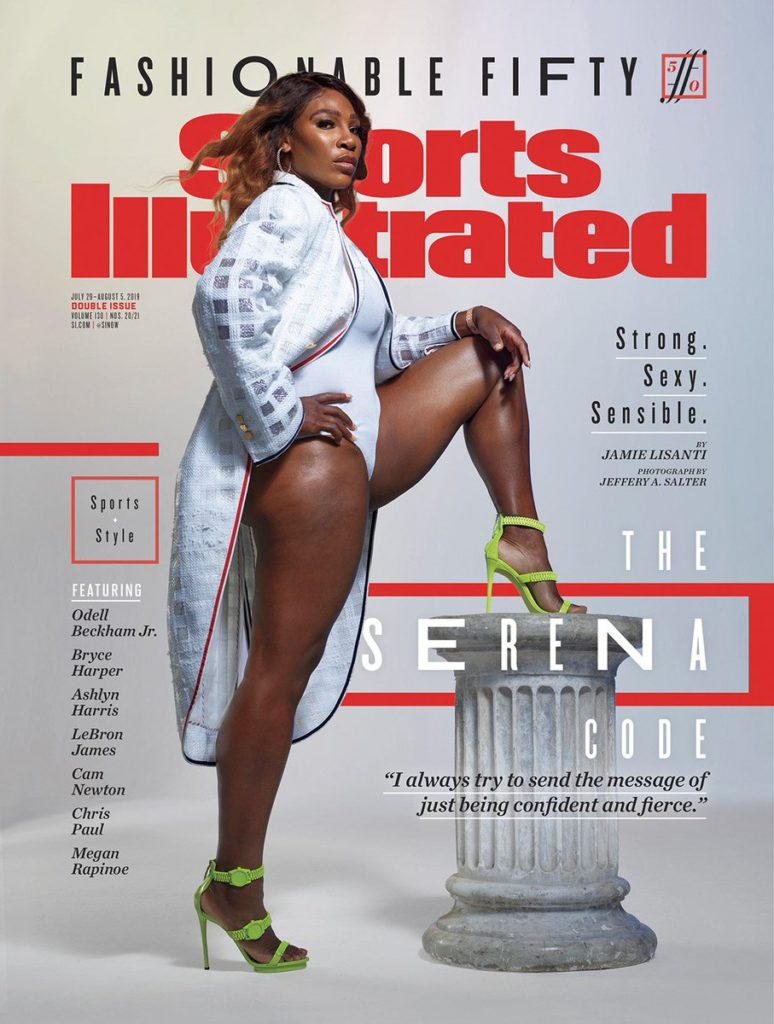 Williams now has a fashion brand, “S by Serena.” And her studies at the Art Institute of Fort Lauderdale almost 20 years ago, may well now be her base to launch career No.2.

Her appearance on the front cover of Sports Illustrated this week as a true ‘sports stylist’ signals she may not be too far away from hanging up the racket for good.

WIMBLEDON commentator Andrew Castle has been blasted for commenting on Mirka Federer’s ring during the Wimbledon Mens final between Roger Federer and Novak Djokovic, according to the London Daily Express.
Wife Mirka Federer was spotted in the crowd against Djokovic and during the match Castle suggested that Mirka’s wedding ring looked expensive.

“Doesn’t look like costume jewellery, does it, on the finger?” he said.

“You’re paid to comment on the tennis, not Mirka’s jewellery,” said one tennis fan.

ALEXANDER Zverev let the cat out of the bag this week, when discussing his early exit from Wimbledon – well actually, a dog, and a round of golf.

Zverev was a major disappointment in the tournament after winning the ATP finals in November in London. But he was quick to assess his Wimbledon no-show.

And coach Ivan Lendl seemingly bore the brunt of the criticism, with Zverev asking his coach to ‘concentrate’ more on his job.

“Sometimes we go on the practice court. The training is over two hours. And for half an hour he stands with his back to me and tells me about his round of golf,” Zverev said, adding that his coach’s main current topics were “golf and his little dog.”

Zverev, speaking ahead of the ATP tournament in his hometown of Hamburg, said his position would “become clearer over the next few days”.

It looks like Lendl is not for the chop, but less puppy talk and more court advice is definitely on the cards.

WHEN you are world No.1 and you have just won another Grand Slam, you can afford to pick and choose your comments.

And the media will, usually, give you some slack.

It’s when you are ranked at 20-something – or lower – and you choose to criticise anyone or anything stopping your climb up the rankings – the media will call you out.

So when Novak Djokovic initially decided to opt out of any comments from other players about his performance, the media didn’t take much notice.

But this week, they did, as Nole gave a brief insight into what he thought abut a few things, including one Nick Kyrgios.

Remember, a couple of months ago Kyrgios claimed the Wimbledon champion wasn’t in the same league as Roger Federer or Rafael Nadal.

Kyrgios even said he labelled the world No.1 “cringeworthy”.

“I just feel like he has a sick obsession with wanting to be liked,” Kyrgios told New York Times.

But, behind the scenes, the Serb liked an Instagram post from John McEnroe, where he was quoted as saying Kyrgios would be a top five player in the game if not for his lack of effort.

McEnroe has a point. Yes, Kyrgios sells tickets, and yes, he came close to upsetting Rafa Nadal with his unsettling tactics at Wimbledon.

Maybe, just maybe, Novak is agreeing with McEnroe, in a subtle sort of way.

In May Djokovic said he ‘wasn’t losing any sleep’ over Kyrgios or his comments.

AT every tournament – and every Grand Slam – the talk begins of the next generation players taking the mantle off the ‘Big Three’.

But at the end of almost every tournament talk turns to why the next generation is still not good, and how they’ll never break through as long as Federer, Nadal and Djokovic are still playing.

The ‘Big Three’ are still the three best players the game has ever seen. And remember … they have won 54 Grand Slam titles collectively.

So where next for the title challengers?

Judging by the standard of Wimbledon this year, the veterans aren’t retiring just yet.

SIMONA Halep confessed at her return in Romania that Djokovic hadn’t invited her to dance during the Wimbledon Champions Dinner because the Serbian was too tired after his long final against Roger Federer. “I didn’t dance with Djokovic.

He was very tired, so he didn’t invite me to dance,” Halep said. This happened after Halep declared that she is nervous about the moment when she would have to dance with Djokovic in front of everyone present at the Champions Dinner: “I am really stressed if I have to dance.”

“Kerber danced because Novak asked, I heard,” she said. “So if the boy will ask me I have to go. I’m really stressed. But I hope I’m gonna be okay. I’m gonna be fine and I will enjoy the night”.

Even though Djokovic danced with Kerber, Halep understood the Serbian’s physical condition and didn’t feel offended.

ROGER Federer’s epic final at Wimbledon has forced him to change his schedule as the season heads to North America.

Federer has decided not to play in the Rogers Cup in Montreal which starts on August 5 and his next competitive tennis will not be until the Western and Southern Open in Cincinnati, which begins on August 11.

“Looking ahead, we had decided that I would skip Montreal to give my self enough time for the US. I wish I had more time but I don’t, so i’m just going to take enough time off when I can and then prepare for Cincinnati.”

After Cincinnati, Federer is then ready to play the US Open followed by the Laver Cup.

“We had very limited expectations on his appearance,” admitted Lapierre. “When I talked to him before and during Wimbledon, he always said that he would be careful on the tournaments he would play until the rest of the year. 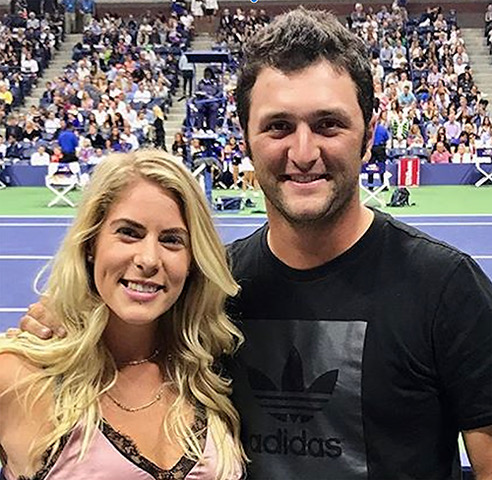 AND finally … how did a tennis match nearly ruin a top pro-golfer’s relationship with his gorgeous sporty model girlfriend?

As Spanish golfer Jon Rahm – nicknamed “Rahmbo” with four European Tour victories under his belt already – sets out on his final round in eighth position on the leader board in The British Open Golf Chaampionship at Royal Portrush, his golf WAG fiancée Kelley Cahill will be cheering him on him every step of the way. But it was nearly so different.

Rahm 24 and Kelley 23, met when they were both students at Arizona State University.

Kelley is a sporting all rounder, and keen Tennis player and she revealed that a fiercely contested tennis match almost killed their relationship stone dead.

She told friends that the multi-talented Rahm’s killing forehands and crosscourt zingers were so good she couldn’t believe how she lost a tennis match to a golf student.

Kelley was hopping mad for two days and it could have been the end of a beautiful relationship.

However she changed her tune, and the happy couple got engaged in August 2018, and neither have stepped onto a tennis court since that almost fateful day.

BIG money. What’s on offer in New York next month…