Britain to face hosts Spain, and Russia take on Canada in semis

Russia saved three match points in the concluding doubles rubber to deny Serbia a Davis Cup semi-final-place on Friday, with the winners moving on to face Canada in Madrid.

The pace of the crowded 18-team all-in-one week which has replaced the classic Davis format under new Spanish management is picking up after four days of group play at the Caja Magica.

Karol Khachanov and Andrey Rublev sent their nation into the final four after the pair won the deciding doubles rubber 6-4, 4-6, 7-6(7) over Novak Djokovic and Viktor Troicki.

Earlier, Rublev played strictly in the zone as he crushed Filip Krajinovic 6-1, 6-2, taking 52 minutes to hand the first point to his nation after a 13-ace performance.

The challenge to Serbia was answered in the next rubber by world No. 2 Djokovic, who stormed past Khachanov 6-3, 6-3, firing 11 aces and three breaks of serve.

“It was a typical Davis Cup match, very even,” Khachanov said. “Both teams deserved to win.

“We were all fighting to the end. maybe we got a bit lucky (thanks to a pair of huge errors from Viktor Troicki,a missed volley in the breaker and a return error on a Russian match point).”

Added Rublev: “I feel a bit sorry for Serbia, they really showed they belong here.

“As for Canada tomorrow, we’e not even thinking about that yet. we want to absorb this win.

“They will be tough after eliminating Australia (in the first of the quarter-finals).”

The Russians finished the doubles with 26 winners and 40 unforced errors in the battle lasting for almost two and a quarter-hours.

In singles, The 23rd-ranked Rublev continued the solid form he had shown all week in group play during ties with host Spain and holder Croatia.

Djokovic was similarly never threatened in his victory over Khachanov, ranked 17th as the world No. 2 squared the day at a set each.

Dan Evans came good after two group losses this week defeating Jan-Lennard Struff 7-6(6), 3-6, 7-6(2) on Friday to clinch a 2-0 winning scoreline for Britain over Germany in the Davis Cup quarter-finals.

The win came on the back of an opening singles win as Kyle Edmund won in straight sets over veteran Philip Kohlschreiber 6-3, 7-5.

“I felt like the team down the last two days,” Evans said. “To come back and get it like that is amazing for them.

“They all supported me through everything over the last few days and I’m so happy we’re through.

“I thought I was playing good the last two days, but I couldn’t get over the line. It was tough before the match.

“I didn’t feel great – you’re down and you’re losing – but everybody was keeping me going for the matches, keeping me positive.”

Britain’s move into the final four of the event included only one performance from Andy Murray, with the former No. 1 winning an opening match in the tie against the Netherlands on Wednesday.

Edmund was pleased to earn the first point of the day for Britain, calling his level “good.”

“Sometimes when you play first, you’re running on adrenaline, pumped to be out there, and as the days go by the challenge is to keep that consistent.

“I think I did that – my mentality, my consistency, and my game are in a good place.

”Over the last two days we’ve gone 1-0 up and Evo’s (Evans) been unlucky in some tough situations. He’s been great – he’s kept fighting.”

Britain will now prepare for a Saturday showdown with Spain after another quarter-final which went the full three-match distance.

The late-night doubles rubber which finished early Saturday morning ended in a 6-4, 4-6, 6-3 win for Rafael Nadal and Marcel Granollers over Leonardo Mayer  and  Maximo Gonzalez

Spain broke on a third chance in the second game of the final set for a 2-0 lead which saw them through to the semis after more than two hours of battle which Nadal served out..

Spain’s tie was a repeat of the 2008 Davis final against Argentina. Nadal, who boasts a 29-1 record in Davis Cup singles, lost his first set in doubles at the competition since 2016 in a playoff against India.

In singles, Nadal had kept the hosts alive with his one-hour 6-1, 6-2 thrashing of Argentine Diego Schwartzman. 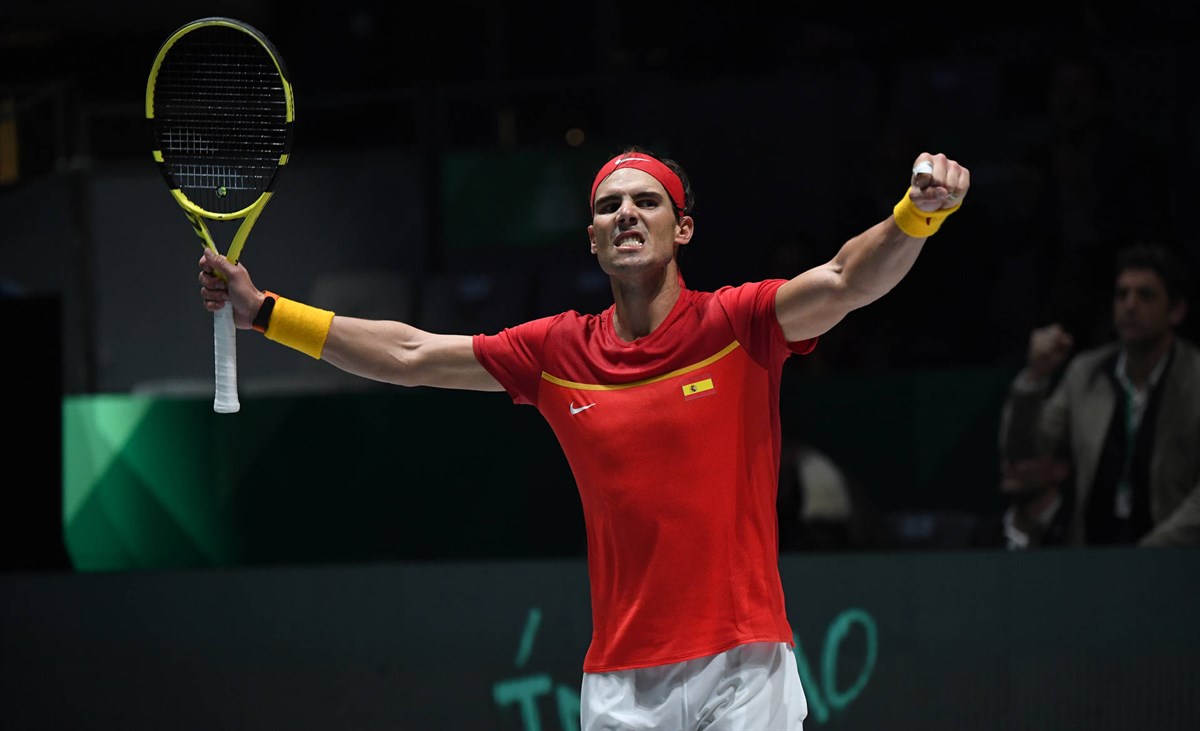 Nadal won the first set in less than half an hour and barely needed longer in the second.

The world No. 1 was successful in all 15 of his first-serve points and lost just two points on serve in the torrid opening chapter at the Caja Magica.

Earlier, Spanish sub Pablo Carreno Busta – taking the place of Roberto Bautista Agut who is missing due to a family emergency – lost the first singles rubber 6-7(3), 7-6(4), 6-1 to Guido Pella.