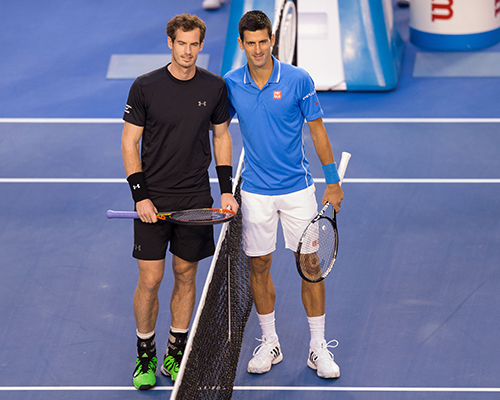 Andy Murray has found a spot around the edges of this week’s Rome Masters despite not being entered in the tournament.

And Novak Djokovic said on Monday he’s glad to have his long-time rival back in the ATP ambience after an unofficial hit with the Scot at the Foro Italico.

“I was very happy to see him. I haven’t seen him in a while, and it was great to hit with him,” the Serb top seed said.

“I thought he played very well on the court.”

Murray has managed to get himself to Rome in hopes of practice hits with the big names as the No. 123 struggles to return to form after his three seasons of hip surgery hell.

The 33-year-old awaits word from Roland Garros as to whether he will be awarded a wild card entry, but would also happily take on from upcoming clay tune-up Tour events in France and Geneva.

Djokovic is himself back on the circuit after taking a month off as his priorities begin to shift from tennis to family life, with competitive focus on the Grand Slams.

“We had a nice chat and had a few laughs on the court,” Djokovic said. “It brought back the old times when we spent a lot of time on the court together,

Whether it was training or playing against each other.

“He is moving well, considering it’s clay which is not the best surface for his hips.

“But considering what he has been through lately, I think it seems like he’s been feeling well on the court.”