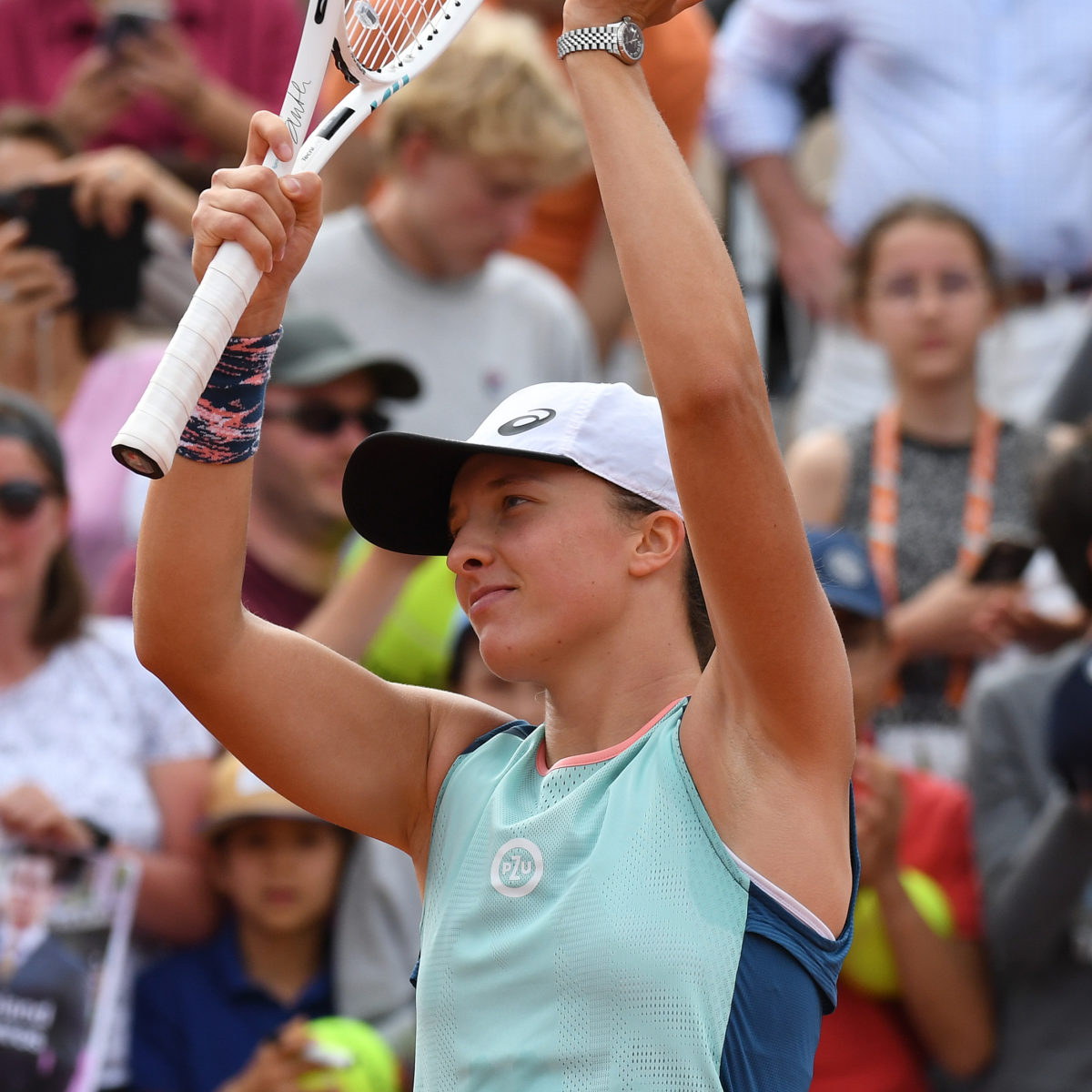 The Iga Swiatek juggernaut continued on Thursday as the world No. 1 crushed Alison Riske 6-0, 6-2 in barely an hour at the French Open to win her 30th straight match.

The Pole who took over the WTA top spot when Ash Barty abruptly retired this spring, has not lost since February and holds the longest Tour streak since 2013.

“Always I feel like there is something I can do better,” the winner said. “I’m pretty happy I just played a solid match.

“I’m continuing what I have done in other tournaments. I’m happy that I can still play here have this kind of focus.”

The top-ranked player said that living with the No. 1 ranking is something she is getting used to.

“Winning all these matches gives me a lot of confidence but it can really press me down if I don’t adjust to it well.

“I feel like I’m using my new position to put more pressure on my opponents.”

Swiatek’s victory included her 15th 6-0 set of the season; the win lasted eight minutes longer than a first-round hammering which took 54 minutes.

Riske saved a match point with a second serve ace but went down to defeat on Swiatek’s second chance with a return gone long.

Paula Badosa maintained the honour of French Open Top 10 seeds as the energetic third seed moved into the third round 7-5, 3-6, 6-2 over Kaja Juvan.

Five of the elite were gone by Wednesday with No. 8 Karolina Pliskova defeated on Thursday in straight sets.,

Slovene Juvan, finalist last month in Stuttgart against Angelique Kerber, needed treatment on her back after winning the second set but could not maintain the pace against the speedy Spaniard.

“I have so much energy, that’s what helps me as well in matches,” Badosa said after her victory in two and a quarter hours.

“One of the challenges all my life has been to stay more calm, and to learn to enjoy, to be on a sofa to be honest.

The No, 227 outsider has been competing in her first Tour main draw and was pitted against Top 50 opponents for the first time as she competes here..

The 26-year-old got into tennis seriously only after graduating university in Florida and earning an MBA in finance in 2019.

The outsider spun off eight consecutive games for a 6-2, 4-0 lead before eventually cloning out the upset.

Pliskova was weighed down by 28 unforced errors and now stands 6-8 in 2022 after coming back from an off-season wrist fracture.

“This match was full of emotions through and through,” the winner said. “I managed to move her around but I didn;’t expect this (win) to happen.

“It’s incredible thinking that I actually won in two sets against a Top-10 player, a previous No. 1.

“I don’t really know what to say, this is really something I never imagined before – to be in the third round of a Grand Slam.”

American Jessica Pegula, seeded 11th, finally got in a completed match against Anhelina Kalinina as the pari met for the fourth time in 2022.

At their last two matches, in Rome and Miami, Kalinina turned in a walkover and retired after losing the first set in Florida 6-0.

It took Pegula five match points to get over the line in two and a half hours.

“I’ve had 19 match points in the last two matches, so I think that’s a record,” she said.

“Even the last point, I was just like, can this just end?

“Like at some point either me lose or you win, I don’t care any more. It was like I just want this to be over.

“It was so stressful.”