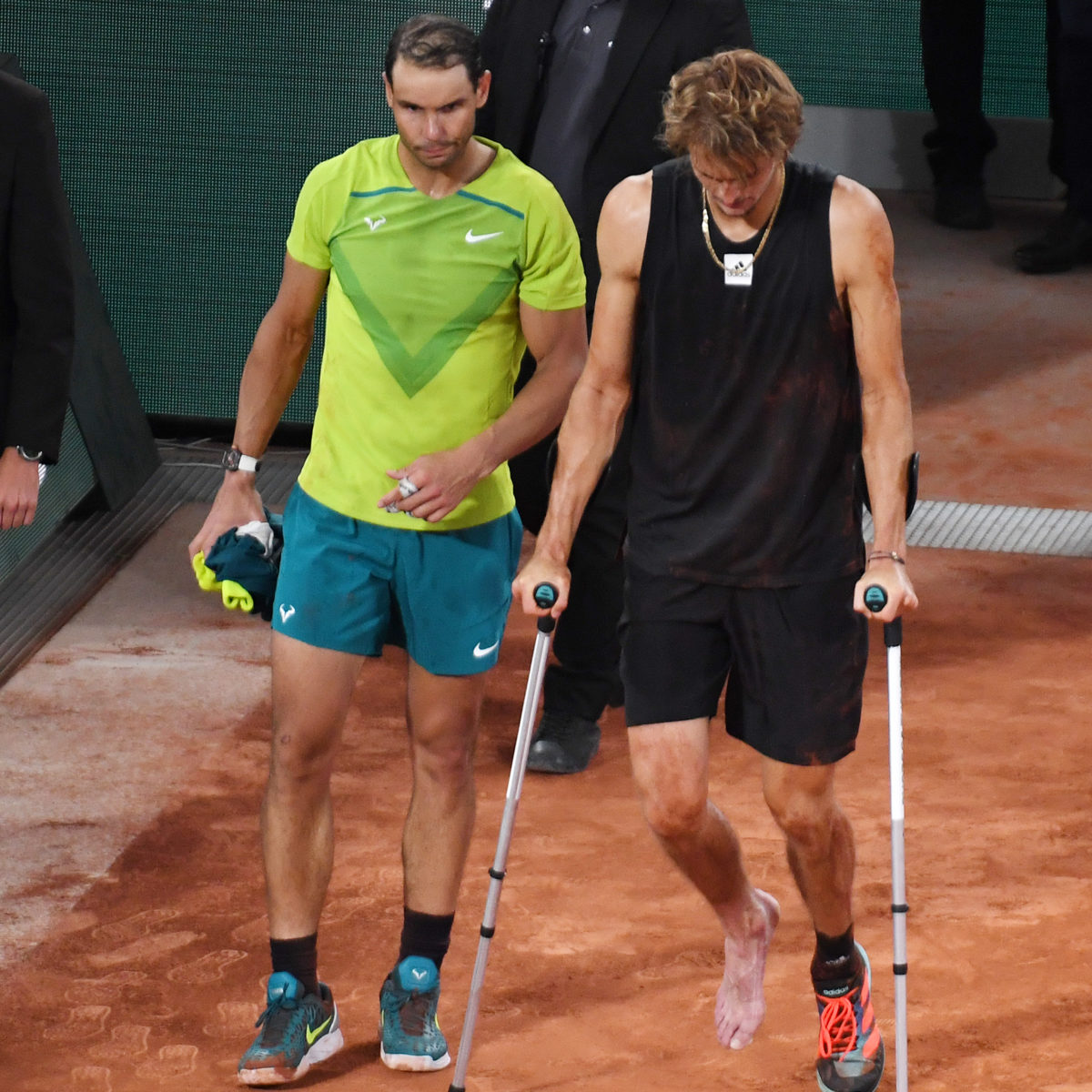 Rafael Nadal reached his 14th Roland Garros final on Friday under a cloud as opponent Alexander Zverev could not go on after seriously rolling his ankle and leaving the court in a wheelchair.

Nadal, who will bid for a 14th trophy at the career-defining venue, advanced 7-6(9), 6-6 as second seed Zverev rolled his ankle and fell to the clay screaming in agony.

The Spaniard rushed to the opposite side of the court and could only watch as Zverev was taken off in a wheelchair, the match over.

The German reappeared five minutes later, grimacing painfully on crutches, with the match declared over in Nadal’s favour on the day the veteran with 21 Grand Slam singles titles turned 36.

That match was interrupted in the third set (4-1, 15-15 to Ruud) by a French climate protestor, who chained herself to the net.

She was finally cut free and carried off by four security men with the players returning to court after a 15-minute pause as the situation was resolved.

Nadal was stunned by the quick turn of events in his long-running battle with Zverev, a match where the first set took 90 minutes and total elapsed time exceeded three hours.

“It was a very tough,match he was playing unbelievable in the tournament,” Nadal said. “I know how much he has been fighting to win a Grand Slam title.

“For the moment he was very unlucky. But I’m sure he will win more than one, I wish him all the best.

“Only thing that I can say is I hope he’s not too bad. Hopefully it’s just the normal thing when you turn your ankle, and hopefully nothing is broken.”

“It was more than three hours and we had not even finished the second set.

“It is difficult for me to say a lot today in this situation. But being in another final at Roland Garros is a dream without a doubt.”

The Spaniard added: “He started the match playing amazing. I know how much means to him to win his first Grand Slam.

Nadal needed three set points to win the marathon opening set after saving four possible set-winners from Zverev, who could not convert on a tiebreak lead of 6-2.

The second set was littered with breaks – seven in the first 10 games – with the pair-dead level at six-all when Zverev suffered his dramatic injury.

The German Zverev had won three of his last four matches with Nadal, including a win on Madrid clay last season.

The pair were meeting in a Grand Slam for the first time since the Australian Open five years ago.

Ruud began turning the momentum in his match against 2014 US Open winner Cilic, with the Norwegian coming from 0-40 down to win the second set and level the evening.

Ruud began the third set with a handy break of the Croat and followed up with a love game sealed with his 10th ace for 2-0.

He made it a double break, 30, with a flick of the wrist for a sharply angled winner cross-court as Cilic’s frustration mounted.

Ruud wrapped it up with an ace to complete a love game and advance to the  biggest match of his career in a shade under three hours.

“It was a great match form my side. but I didn’t play well in the first set,” the winner said. “But I was able to lift my game in the second.

“After that I played some of my best tennis this year, I’m so happy with this performance

“With Marin playing so fast, I figured I needed to step it up a bit and attack – it worked out well.”

Ruud, who has trained at Nadal’s Mallorca academy since 2018, is looking forward to facing his idol for the title on Sunday.

“Rafa is the last of the Big 3 players, to play him in a Grand Slam final will be a special moment.”

Williams gives little away about return to Wimbledon

Williams gives little away about return to Wimbledon