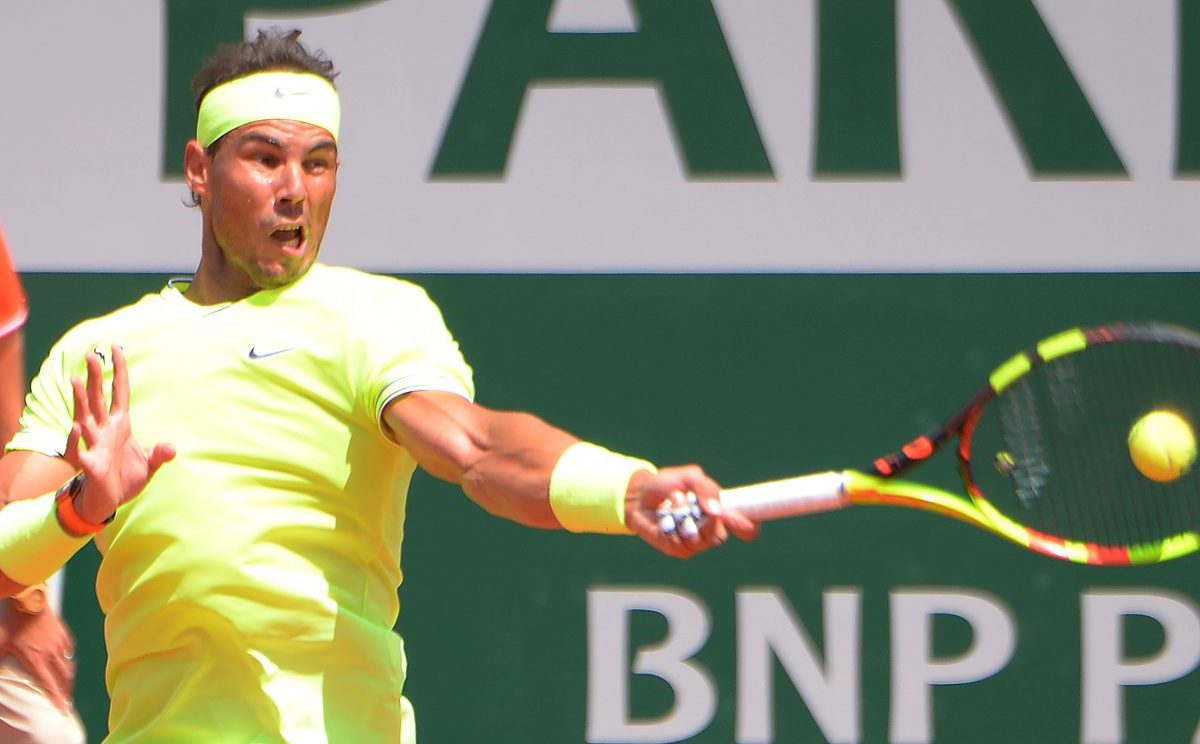 Rafael Nadal dispatched his second straight German opponent on Wednesday, dropping just eight games as he defeated Yannick Maden 6-1, 6-2, 6-4 to slide easily into his comfort zone at the French Open.

“It was a good match for the first two sets. Not unbelievable, but, 6-1, 6-2, with positive feelings,” Nadal said. “In the third, I lost a little bit of concentration and intensity – and  then all the match became difficult.

“But I had the feeling the match was positive.”

The contest played on the Suzanne Lenglen court was Nadal’s 14th – with every one a victory for the 11-time tournament champion who turns 33 next week.

The second seed has been particularly brutal on qualifiers here, defeating all eight that he has faced in straight sets; he improved his career record against them to 91-5.

During that run, Nadal has lost just three sets at the secondary showcourt venue while winning 42.

Twitter fans of the Spaniard made their displeasure with the court choice known, saying it was unfair that their clay hero was kept off the top Chatrier court, while  Roger Federer was scheduled there for a second straight match.

Federer wasted no time on the big stage as he dismantled any upset hopes of German lucky loser Oscar Otte, ranked 144, with a 6-4, 6-3, 6-4 second-round result.

The outsider had little chance of denying the 20-time Grand Slam champion a 67th win at the tournament, the most of any player save Nadal.

“I must say I feel really good considering I haven’t played here (since 2015),” Federer said.

“The next round is definitely going to be tougher, I’m very happy. We’ll see how far it’s going to take me. So far, so good.”

Greek sixth seed Stefanos Tsitsipas reached the third round in Paris for the first time as he recovered from a 4-2 deficit in the fourth set to defeat Hugo Dellien of Bolivia 4-6, 6-0, 6-3, 7-5.

But the winner had his problems with court speed at the new Mathieu “garden” showcourt, with a slow bounce not at all to his liking.

“The court is much slower than Chatrier, much slower. I was a bit struggling with sliding on the court. It doesn’t have much clay on it, so it’s very dry and gluey.

“The balls were getting really heavy with all the moisture, all the dust. It made play very slow, with long rallies most of the time.”

The best at a major for Tsitsipas was the Australian Open semis in January, where he was crushed with a 6-0 third set by Nadal after beating Federer in the fourth round four days earlier.

Asia’s top player advanced with 35 winners but had nearly 40 unforced errors in victory.

Wawrinka won hearts at match end when while signing autographs he reached down and plucked a child being swallowed in the crush of fans, saving the little one from any danger.

“People were pushing too much, and he start to cry because he had some pain. I took him out of that mess a little bit, he was in pain and sad.

“I tried to make him feel better, give him a towel, and try to find his dad.”

No., 252 Frenchman Nicolas Mahut, broke through in the best possible way as he upset Phlipp Kohlschreiber 6-3, 6-3, 6-3 to reach the third round of his home major for the third time in 17 appearances.

The 37-year-old winner from Boulogne-Billancourt just steps away from the gates of Roland Garros was playing only his third ATP-level match of the season after dropping down mainly to the Challenger circuit.

“I’m very happy with this win. Reaching the third round is fabulous,” Mahut said. “I was playing loose, completely carefree.I used all my weapons and it was good. This is something that one can do when one is at the end of one’s career.”

The former Grand Slam champion pair of Garbine Muguruza and Sloane Stephens, reached the French Open third round with minimal difficulty on Wednesday.

The Spaniard who won the trophy here in 2016 and followed up a year later with the Wimbledon title, beat Swede Johanna Larsson 6-4, 6-1.

“I don’t have any power and I don’t feel well,” Bertens said as she left the court.

Muguruza needed barely an hour to impose her game on Larsson, who has only once reached the third round at Roland Garros.

The Spanish seed broke four times in her comprehensive victory.

“It was a better match than the first one, we had some great rallies. Johanna is an opponent that I have never faced before. So I was looking forward to that.

“I was able to control my nerves better than in the first round. Going through that tough first round, having extra days to practise, gives you a little bit more  preparation.

Muguruza moved into a third-round clash with Ukrainian ninth seed Elina Svitolina, who advanced through a walkover against Kateryna Kozlova, who retired pre-match with viral illness.

“I think it’s a great third round for both of us, the former world No. 1 said.

“It’s the type of match that I want to play, it could be any late-round match, but it’s in the third round. So it’s going to be a good one.

Stephens, a Madrid semi-finalist this month who exited in her opening Rome match, played a losing final here a year ago against Simona Halep.

The American fired 24 winners in her 86-minute victory, winning all seven of her break point chances.

“I played well both matches, I’m so just happy to be back in a good position in a slam,” Stephens said,

“I’ve had my best consistent results here. I like playing here, it suits my game well.”

The shoulder injury which kept Canada’ 18-year-old Bianca Andreescu away form the courts for two months. returned to spoil her chances of playing for the third round. US opponent Sofia Kenin benefitted form a walkover.