Respect not in Nick’s vocabulary 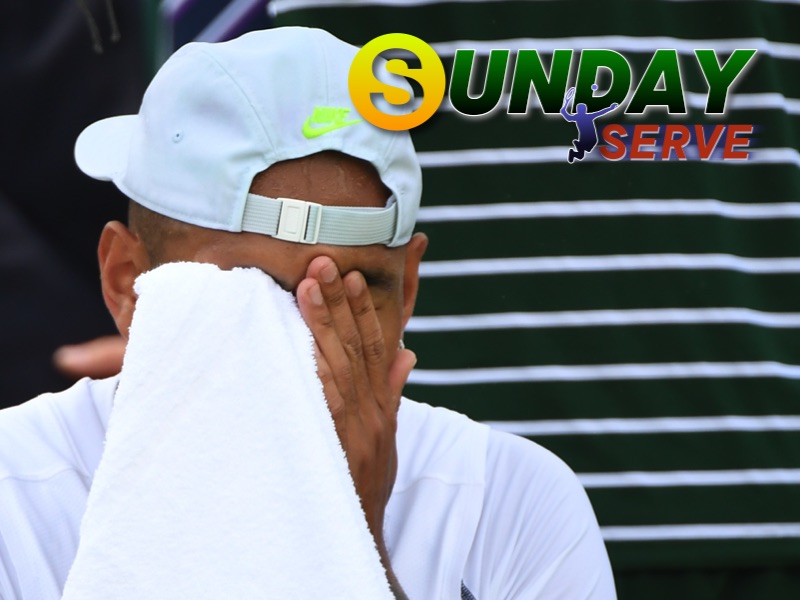 RESPECT is a two-way street. Will someone please email Nick Kyrgios and inform him.

The loudmouthed Aussie has once again plumbed the depths to spew out more vitriol about not being respected after Ash Barty won her fifth John Newcombe ‘player of the year’ medal last week.

He also posted a graphic that showed Barty with three titles and Kyrgios with four (including both doubles and singles), and then said both had won a Grand Slam each.

But when did Kyrgios win a Slam?

And perhaps Kyrgios should check what the medal is awarded for … ‘Australia’s most outstanding elite tennis player and ambassador to the sport’.

Barty, on the other hand, chooses to work with disadvantaged indigenous children, has done so throughout her career and still does.

Meanwhile Kyrgios posts garish images of his latest gold watch purchase or of the latest girlfriend.

The 21st century me-me mentality is alive and well in the Kyrgios mindset.

And let’s look at your other on-court record, Nick … violations for breaking racquets, arguing with umpires, arguing with the crowd and a regular bout of foul language.

So here at Grand Slam Tennis we have a message for you … show some humility and class and shut the f*** up.

AND fans are none to happy either:

Wrote one: “A decent person would be Nick posting this image congratulating Ash and saying something about how she makes Australia proud and/or wishing her the best. But of course, Nick is a selfish and delusional twat. These man-babies need to grow up!”

“Since when do finalists get counted alongside winners? Lol,” asked another.

“People let his atrocious behaviour slide because he’s apparently “good for tennis” but then drag players like Alcaraz and Tiafoe for the silliest things like fist pumping and hyping up crowds,” another said on social media.

SNOW JOKE: Wimbledon was covered in a blanket of the white stuff last week as a cold snap froze most of Britain.

BORIS Becker has opened to a TV crew about being sent to jail over bankruptcy offences and admitted he hit rock bottom while waiting to be sentenced earlier this year.

Becker was convicted in April of hiding £2.5 million-worth of assets and loans to avoid paying his debts.
He was released from prison last week after nearly eight months and has signed a deal to make a documentary.

“I’ve hit my (rock) bottom, I don’t know what to make of it,” Becker says on camera.

‘I will face my sentence, I’m not going to hide or run away. I will accept whatever sentence I’m going to get.”

Becker is reportedly be deported to Germany once released and Apple TV+ are to make a the two-part show about his personal life.

The BBC will not be rehiring the German as part of their coverage.

IT must be Christmas and the season of goodwill … Naomi Osaka certainly thinks so.

Osaka, once of the ‘I don’t went to speak to anyone’ brigade, was full of praise for her childhood her Serena Williams in a recent interview.

And she believes Williams hasn’t gone away from the court just yet.

“To me, it feels definitely surreal and I’m almost like I think she’s coming back,” Osaka said.

Osaka also admitted she is coming to terms with the media and interviews.

“I think I’m slowly getting comfortable with using my voice but for me it was probably during quarantine like when COVID first came out,” she said.

“I didn’t have anything to do, so I sat by myself and I was just thinking about my life and what I want to accomplish and I think all in all I just wanted to feel like I didn’t shy away from issues that I felt heavy in my heart.”

FROM the team that brought us Drive to Survive, the F1 doco series, we are soon to get Break Point, which follows a group of players on and off the court as they compete in tournaments around the world.

Break Point’s debut, three days before the Australian Open, will then resume again later in the year, following Wimbledon, Eastbourne, Queens Club, the US Open, the WTA and ATP finals.

SO Emma Raducanu has appointed her fifth coach in 18 months – as German Sebastian Sachs has agreed to team up with the former US Open champion.

Raducanu lost to world No.2 Ons Jabeur in an exhibition match in Abu Dhabi on Friday as Sachs, 30, looked on.

ANDREY Rublev has hit out at the British government after attending a meeting over who will play and who won’t at the 2023 Wimbledon championships.

Rublev, who was one of a few Russian athletes who publicly voiced opposition to the war in. Ukraine, has criticised the UK government’s stance by saying it stops the prospect of a peaceful gesture being made.

He also claimed the government used the sport to manipulate politics.

“They really don’t want to help,” he said.

“The government of England probably proved that for them is all about politics. They are showing that politics is more important than peace.

“We (the tennis players) can show a strong message, at least for one time, that sport can be separated from political issues. Could be a good start. I know that’s difficult because they will always use sport to manipulate politics.”

Rublev said he was part of a meeting with the Grand Slam organisations and the ATP, praising the ATP for its support of the players.

“We were very honest, giving a lot of options, many ways to help. Really help. Because, if they ban us for the second year, we will see no changes and it will be worst for tennis,” he said.

“We are offering help in any direction that is possible. We want to show that tennis can be bigger than politics.”

It’s quite simple: politics and the useless politicians who peddle it, should have no say whatsoever in how sport is run.

RAFA Nadal loves colourful outfits and each year changes his on-court attire to suit. 2023 will be no different as he unveiled last week his colour for Melbourne next month: Orange!

AND finally … fans attending the Indian Wells tournament in Southern California next March will not be required to prove they are vaccinated against COVID-19 before entering the grounds.

The change in policy came after a series of meetings with California’s several health departments.

“The 2023 BNP Paribas Open will not require proof of COVID-19 vaccination for fans attending the event at the Indian Wells Tennis Garden,” a statement said.

“We will continue to closely monitor the situation leading up to the tournament and reevaluate any policies as necessary.”