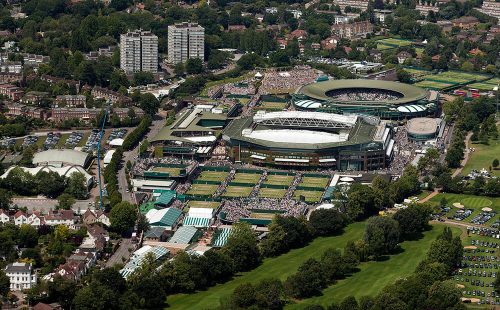 Planning complications look likely to delay Wimbledon’s grand plans to expand across Church Road until nearly the end of the decade, the Mail Online reported.

Possible problems with appeasing local residents in toney SW 19 over a project to lay down enough extra court to allow qualifying to be staged at the club look to be part of the reason for the leisurely timetable.

The All England Club purchased a large chunk of inviting green space several years ago when it bought out the neighboring Wimbledon Park golf club with an eye to expansion.

But completion of courts which were to have been in place by 2025 now look to be pushed a few additional years down the track.

Due to a lack of space, Wimbledon has always had to hold qualifications on the classically dodgy and uneven grass courts at nearby Roehampton club, in contrast to the other three Grand Slams which have no trouble hosting the preliminaries onsite.

But the Mail quoted from a document outlining the current situation: Based upon obtaining council planning permission, ‘it will take at least six years to construct the new tennis courts within the AELTC landholding.

“It will take at least two years for the courts to be mature enough to be suitable to be used for The Championships.”

At the moment, though, Championships bosses have more pressing matters to deal with concerning this summer’s edition.

Due to COVID, all options are on the table, with officials forced to wait out the weeks to see how the virus situation develops closer to the proposed June 28 start date for the grass fortnight.

The major was not played in 2020, with the club able to easily weather the financial fallout thanks to  “unicorn” pandemic insurance payout in the multi millions – a luxury which is now all but unavailable due to commercial factors.