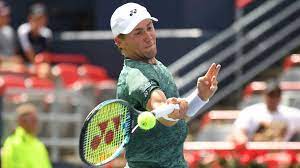 Montreal Masters target man Casper Ruud used a lengthy rain interruption to best advantage on Thursday to complete a 6-7(4), 7-6(4), 6-4 win over Roberto Bautista Agut for a place in the quarter-finals.

The Norwegian is the highest eed standing after the second-round exits of No. 1 Daniil Medvedev, No. 2 Carlos Alcaraz and No. 3 Stefanos Tsitsipas 24 hours earlier.

Ruud and Spain’s RBA – winner of the pair’s previous two matches – split the difference on the first two sets before the skies opened for a deluge and cleanup effort which took 69 minutes.

The tennis Norseman came back to court refreshed and admitted the break was exactly what he needed.

“Thanks to the weather gods,” the fourth seed said. “It was a tough battle, the first two sets, two hours 20 minutes of good intensity.

“But I was feeling it a bit in the legs, it was tough to find my intensity. The rain gave me time to breathe and regain some energy.”

Ruud advanced on his fourth match point on the back of 54 winners in the struggle lasting for nearly three and a half hours.

But there will be more to come on Friday as the spring finalist at the Miami Masters plays for the semi-finals in Canada.

“I’m still surviving, there will be another match tomorrow and I’ll try to survive it.”

Ruud takes a season record of 37-13 in the the quarters.