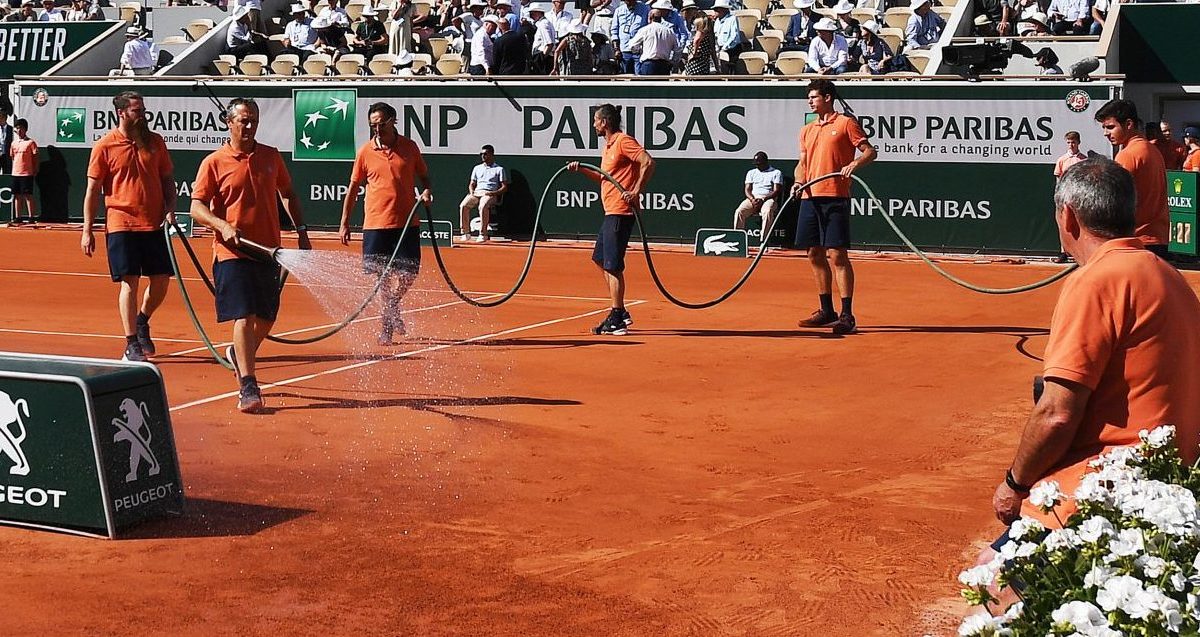 Rafael Nadal and Roger Federer assumed their accustomed places in the French Open quarter-finals as both former champion produced identical straight-set victories over Argentines on Sunday.

Federer was untroubled as he followed on the Chatrier showcase court, duplicating that scoreline in a victory over Leo Mayer which took and hour and three-quarters that sent him into his 54th Grand Slam quarter-final and 12th here.

Third seed Federer had no complaints about his performance  on a steaming summery day as his return to clay after two seasons away pays continuing dividends.

“It was windy, tough conditions (which made it) fast, it’s swirly, especially the one side, where you had a lot of wind in your back.”

“It was important that I focussed there – I did that well, and I’m very pleased with the match.”

Nadal was equally ruthless with Grand Slam debutant Londero as the Spaniard maintained his record  of losing only two times here and winning 90 Paris clay matches.

The player who turns 33 to start the second week of the major is into the last eight at a major for the 38th time, firing 40 winners.

“I’m very happy. It’s an incredible feeling to be in another quarter-final at this tournament which has been the most special of my career,” the Spaniard said after two and a quarter hours.

“I played a solid match against a good  player. He’s very intense. Good shots from the baseline. Very aggressive. It was a positive victory for me.”

The emotional win reduced Tsitsipas to tears after playing Wawrinka for the first time.

“I feel exhausted. I never experienced something like this in my life. I feel very disappointed at the end. It’s been a long time since I cried after a match.

“Losing in five sets is the worst thing ever,” he said after playing only the second one of his career’ Wawrinka improved his record in that category to 27-21, winning his 10th here.

Match point was contested, with a Warwinka return landing on the line; Tsitsipas called the chair umpire down to check the line and the sellout crowd on Lenglen erupted when the chair ruled the ball good.

“Wawrinka’s shot that drifted close to the line on match point was in. There should be Hawkeye on clay courts,” Tsitsipas said.

Federer has won his last five matches with his compatriot, last losing in Paris during Wawrinka’s 2015 run to the title.

“Coming back from my knee surgeries was very tough,” Wawrinka said.

“But I put in the work for moments like this. I came back for these kind of emotions.”

Muguruza, a former No. 1,  claimed their most recent meeting at this year’s Australian Open. Victory puts the American into a quarter-final against Johanna Konta, who defeated her on New Year’s Day in Brisbane and a fortnight ago in Rome on clay.

Konta earned her quarter-final placing, defeating Donna Vekic, 6-2, 6-4 to advance the the last eight here for the first time.

The Australian-born player of Hungarian heritage rode her momentum from last month’s Rome final into continued success at Roland Garros. She has played quater-finals at the Australian Open and Wimbledon.

She becomes the first British woman to advance this far since here Jo Durie 36 years ago.

“Clay is a neutraliser, so I think it will be another good match,” Stephens said. “I lost to her in Rome.

“Really tough day, like, rain and — just putting that behind me.

“I’m just going to go out and hopefully play another good, solid match. Obviously in a Grand Slam, playing for a semi-final there’s a lot on the line.”

Konta needed 85 minutes to go past Croatian opponent Vekic, ending a two-match loss streak to the No. 26.

The Brit had never won a Paris clay match before this Roland Garros edition, kept making up for lost time as she broke her opponent five times and managed 33 winners including seven aces.

Temperatures on court were toasty at 31 Celsius on the warmest day so far during the fortnight.

“It was a good match. I thought I had very, very few drop-offs in my level, which I think definitely kept the pressure on her,” Konta said.

“I’m just pleased to have come through that and, very pleased with the level I played.” Konta said she feels in somewhat familiar territory after her previous best Grand Slam showings.

“This is not my end goal or anything. I would love to be here till the very end, but I’m also really doing my best at really enjoying the different matches.”

Czech Marketa Vondruska will line up against Petra Martic of Croatia after defeating Anastasija Sevastova of Latvia 6-2, 6-0; Martic achieved a dream as she put out Kaia Kanepi   5-7, 6-2, 6-4.

“It was tough mentally for me today, especially because I was stopped four times before in the fourth round,” Martic said.

“I was doubting whether I was ever going to get that fourth round.

“Two years ago, I was two points away – didn’t happen.

“That played a role in my mind. It was not always easy to focus on my game, but I just tried to fight as hard as I could, and thank God, I finally made it.”