Knee injury could force a retirement

Rafael Nadal has dropped a huge hint that his participation in Saturday’s semi-final against Roger Federer at the Indian Wells Masters could be in doubt.

“It’s difficult for me to answer. Nobody can guarantee anything about what can happen the next day because, in this world, anything can happen.

“But of course my goal and my idea is be ready for tomorrow. Then (knee pain) happened on court, so I cannot guarantee how I’m gonna wake up tomorrow morning.”

Nadal, who had his fight knee taped after the third game of the second set, said the pain began during the match, but did not go into detail.

“Of course, it’s a special match. But at the end of the day is another tennis match.”

Nadal took the chance to renew his call for less demanding conditions in a game heavily skewed toward hardcourt matches for much of the season.

If I say something against surface, it looks like I am always talking negative when I am in trouble, no?

“It is difficult to find a surface like the surface that we play tennis (on) with the aggressive movements that we have.

“I love to play on hard, but probably my body don’t love it that much.

“(But) the Tour will not change. In my opinion, will be better if, in a couple of years, maybe 15 or 20, doesn’t matter, we find a solution to play on a softer surfaces for the bodies.

“It’s not about only during the tennis careers that I am worried. It’s about after your tennis career that you are still a human person and you still want to have a normal life at the age of 35, 32, 31, or 38 when you retire and playing in this kind of surfaces.

“I see this as a little bit more difficult.” 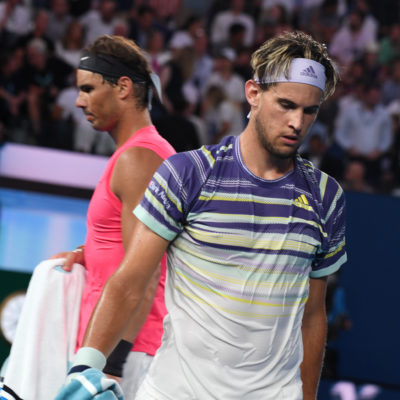