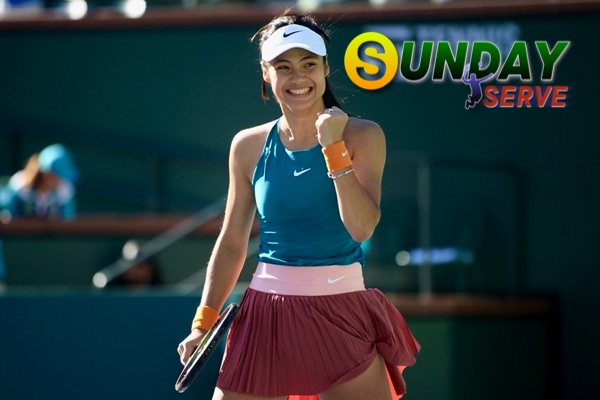 “People who aren’t tennis fans or sports fans say, Emma will win the calendar Slam she’s that great. If it were that easy, right? It just isn’t that easy.”

It certainly isn’t and tennis broadcaster Leif Shiras was spot on when he made his comments about Emma Raducanu this week.

“Is it going to be a rough road for Emma Raducanu?,” he said on Britain’s Sky Sports. “Yes, it is. But she’s done it before and I think she has a taste of what she can do.”

Raducanu’s form since winning the US Open back in September last year has been under the microscope of almost every sports writer, some arguing her win was a ‘one-off’, others saying she still has a lot to learn and will win more.

In Indian Wells last week Raducanu shrugged off a hip injury she picked up in Mexico to play two matches at the BNP Paribas Open.

She won the first, then lost the second to Petra Martic in a marathon match that would have tested the stamina of many.

The pressure returned … is she good enough? Will she win again? Is she fit enough? Has she been found out?

Pressure at the top of any elite sport is intense and while we on our keyboards gleefully pull apart the tactics or the fitness of a player, the players themselves, and especially the focussed ones at the top of their game, ignore the probing questions and stick to their gameplan.

Raducanu – and her advisors – will be doing just that – as many others write her off.

But how can you write off a 19-year-old rising star of the game after such a short time in the spotlight?

Raducanu’s opponents will know she is now a prized scalp. “I beat the US Open champion” is something worth stating in the locker room for some.

And the young Brit will have to manage that, as well as developing her game in what will be a steep learning curve.

She is intelligent and a quick learner – that we know – and with the right people around her, surely another Slam chance will come her way.

And with five of the last nine Slams won by first-timers, and with no dominant players like Serena Williams around, her chances are better than even.

New coach Torben Beltz is experienced to know what and when to put the heat on, when to tell his young charge to back off or to ‘go for it’.

So expect her game to become more multi-faceted as the year goes on, more ideas and more skills. And more mature.

Improvement is definitely top of the KPIs – and why not. Most still think she can only get better – even after that amazing New York start to her career.

“I know it looks silly to everyone – it’s not like I won the tournament, I’m in the final – but it’s a big deal for me.”

QUOTE OF THE WEEK – Maria Sakkari

RETIRED Ukraine player Alexandr Dolgopolov has returned home to take up arms and defend his native city Kyiv from the Russian invasion.

“Used to be racquets and strings, now this,” he wrote in a social media post alongside a photo of a a rifle, helmet and flak jacket.

He was in Turkey when the invasion started, decided to have some military training before returning to Ukraine.

“Hi Kyiv, I’m back to hell and defend our home.”

WORLD No. 1 Daniil Medvedev may not be able to play at Wimbledon this year due to his home country being involved in the war with the Ukraine.

Wimbledon authorities are believed to be considering a blanket ban on all Russian tennis players from this year’s Grand Slam tournament unless they provide assurances that they don’t support the Putin regime.

The UK sports minister Nigel Huddleston has said he is in discussion with the All England Club on the issue and was quoted in Parliament in London on the matter.

“I don’t think people would accept [athletes] very clearly flying the Russian flag in particular if there’s any element of support for Putin and his regime… We are looking at the mechanics of how we could work on that for individuals,” he said.

Calls for Russian to be banned from the game because they are, well, Russians, were dismissed at the WTA this week.

WTA chief Steve Simon said players should not be “penalised by the decisions of an authoritarian leadership”.

The UK sports minister Nigel Huddleston said he had been discussion with the All England Club about banning Russian and Belarusian players from Wimbledon this year.

Simon said players from Russia and Belarus should be allowed to continue playing on the tour.

“You never know what the future may bring,” Simon told BBC Sport.

“But I can tell you that we have never banned athletes from participating on our tour as the result of political positions their leadership may take.

“So it would take something very, very significant for that to change, but again we don’t know where this is going.”

Simon did admit however, that their policy may have to change should governments impose further restrictions.

As a result of Russia’s invasion of Ukraine, Russian and Belarusian tennis players are not allowed to play under their country’s name or flag and cannot play in team competition.

AUSSIE tennis great Todd Woodbridge has labelled the Davis Cup competition an “utter disgrace” over the decision to replace Russia in the tournament finals this year.

After defending champions Russia was expelled from the tournament following the nation’s invasion of Ukraine, the International Tennis Federation opted to hand Canada a ‘wildcard’ entry into this year’s finals – despite Canada having already lost in a qualification round this year.

While the Canadian side lost 5-0 to the Netherlands recently, they were the highest-ranked losing nation, which led to the ITF’s decision.

But many fans and pundits are unhappy over the decision, believing that a nation that had won a qualification round in the second tier World Group I should have been selected instead of Canada.

GRAND Slam tournaments will all trial a first-to-10 tiebreak in final sets this year, the four competitions announced this week.

Until now, the major events all employed different rules on how to end a match.

The Australian Open uses a first-to-10 breaker, while the US Open has opted for a traditional first-to-seven tiebreak at 6-6 for over 50 years.

The French Open has still not used a final-set tiebreak, although Wimbledon introduced a first-to-seven breaker at 12-12 in 2019.

“The Grand Slam Board are pleased to announce the joint decision to play a 10-point tiebreak at all Grand Slams, to be played when the score reaches six games all in the final set,” organisers said in a statement.

“The Grand Slam Board’s decision is based on a strong desire to create greater consistency in the rules of the game at the Grand Slams.”

WILL Smith is expected to win his first Oscar this year for playing the father of tennis superstars Venus and Serena Williams.

Smith was honoured by the British Academy of Film and TV last weekend for his role in King Richard.

“I do feel it’s his time,” the movie’s director, Reinaldo Marcus Green, said this week.

“He devoted himself to the role of Richard Williams, and from the moment I met him, he gave 100% to me.”

Smith, typically, has downplayed the expectation.

“You know, it always sounds like actors trying to be humble saying, ‘Well, you know, I don’t think about awards in that way,” he said.

“I FEEL for Osaka, fans can be brutal.”

They certainly can. The comment came from former American star Pam Shriver this week, talking about crowd hecklers and how it can affect a player.

Shriver showed some empathy for Naomi Osaka after she was heckled by a fan from the stands at Indian Wells.

Osaka went on to lose her second round match in straight sets to Veronika Kudermetova.

“A heckler from the stands said something that really hurt Osaka and unfortunately, Osaka was not the same after that comment,” Shriver said.

“Whether it’s in New York, Melbourne, or around the world, you do get hecklers and you really have to do the best you can and just put the blinders on and ignore them.”

What happened to the ‘gentle’ art of applauding on points, games and set wins. The ‘Oohs and Aahs’ of an expectant audience.

Social media and its online hatred of almost anything it disagrees with has much to answer for.

To end of a positive note, Osaka has been granted a wildcard into the Miami Masters, which starts on March 22.

TENNIS got a mention at the British BAFTA Awards last weekend (the UK Oscars, but on a much lower standard) after movie director Jane Campion criticised Venus and Serena Williams in an awards speech.

The Williams sisters were at the ceremony in support of the film King Richard, which saw Will Smith take home the best actor award for his portrayal of their father, Richard Williams.

The privileged New Zealander Campion, who won best film with a bizarre movie called The Power of the Dog, said during her acceptance speech that while Venus and Serena Williams are “such marvels,” they “do not play against the guys like I have to.”

Oops… Nothing like a woke backlash to bring you crashing back down to earth.

Her comments were met with the usual social media backlash.

“I made a thoughtless comment equating what I do in the film world with all that Serena Williams and Venus Williams have achieved. I did not intend to devalue these two legendary Black women and world-class athletes,” she said in a rushed out statement.

Nick Kyrgios was in the news for a brush with Hollywood actor Ben Stiller at Indian Wells this week.

Midway through the third set of his quarterfinal against Rafa Nadal, Kyrgios was heckled by a fan sitting next to the Hollywood star.

The fan was trying to tell Kyrgios how to hold serve against Nadal.

“Why are you speaking?” Kyrgios asked the fan.

He then pointed to Stiller and said: “Do I tell him how to act? No.”

The moment appeared to spur Kyrgios on, as he held serve. But a double fault then gifted Nadal a lead he never gave up.

AND … Eagle-eyed tennis fans were wondering if Kyrgios is next up for a Netflix doco after his girlfriend Costeen Hatzi was spotted cheering him on from the stands on Thursday with a microphone pack attached to her back pocket.

“She’s wearing a wireless mic pack on her waist. Surely that’s what that’s about?”