Pop-up recycling bins for those Pimms cans at Wimbledon 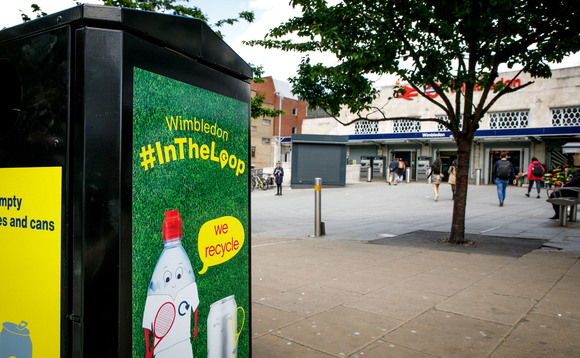 Tennis fans attending this year’s tournament will be encouraged to use pop-up recycling scheme to help ensure cans and bottles are recycled.

Visitors to this year’s Wimbledon tennis championship should find it easier than ever to recycle their strawberry punnets or Pimms cans, thanks to the launch of a major new pop up recycling initiative.

Championship sponsor Evian has partnered with environmental charity Hubbub to expand its #InTheLoop campaign, a collaboration designed to encourage “on-the-go” recycling, and bring it to Wimbledon ahead of the start of event next week.

The new initiative is centred around the introduction of 50 colourful new recycling bins in and around the Borough of Merton, home of the world-famous tennis club. The highly visible bins will be situated in the highest-footfall areas in Wimbledon, including The Broadway, Wimbledon Hill, and Wimbledon Village, with the hopes it will make it easier for people to recycle while they are out and about. The campaign is aimed at those attending The Championships as well as local residents.

The #InTheLoop campaign has seen considerable success since its launch: an initiative in Swansea in 2019 saw a 89 per cent increase in the collection of recycled materials from the beginning to the end of the campaign.

“We are thrilled to be partnering with Hubbub for the #InTheLoop initiative in Wimbledon,” said Gemma Morgan, brand marketing manager at Evian. “We’ve taken important steps in our sustainability journey since the last Championships – with the launch of 100 per cent recycled plastic bottles and achieving carbon neutral certification – and we continue to challenge ourselves to do more. With Wimbledon right around the corner, it’s more important than ever to remind people of the value of recycling, and the steps we can take together to work towards a circular economy.”

The brand, which is owned by Danone, will also be partnering with Sustainable Merton and Hubbub to run ‘The Recycler’, a pop-up facility encouraging people to return plastic bottles and cans in exchange for treats. The Recycler will also form a start point for Danone employees to get involved as Roaming Recyclers – where they will be doing their bit to support the local area with litter picks in the area.