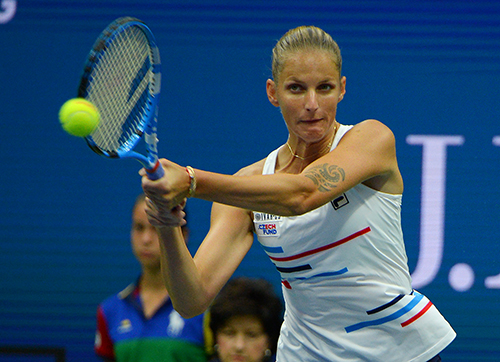 Karolina Pliskova made do without her regular coach on Tuesday to defeat teenaged Caty McNally 6-3, 6-4 on Tuesday to start her US Open campaign with a win.

The fourth-seeded Czech, Wimbledon finalist against Ash Barty,  is unable to be guided at the major by coach Sascha Bajin, former coach of Naomi Osaka and was a hitting partner for Serena Williams.

The German who has a house in Florida was denied a visa to enter the US on a technicality, due to a lengthy stay at his residence during the 2020 COVID-19 shutdown of tennis.

Pliskova, who finished New York runner-up in 2016 to Angelique Kerber, let her manager try and explain the situation.

“Sascha stayed in the US longer than he had during the covid pandemic last year. He has a house in Florida and he didn’t want to travel that much,” Michel Hrdlicka said in a rather convoluted statement.

“This year, however, he still did not receive a visa because of that. We tried to work intensively on it, but to this day we have not been able to solve it.“

Pliskova advanced in 84 minutes with eight aces and five breaks of serve against the doubles partner of Coco Gauff.

The Czech has threatened this summer on hardcourts, reaching the final at Montreal and a semi in Cincinnati.

“I started really well (5-1 lead) and then lost focus at the end of the first set and gave away some easy mistake,” she said,

“She played better in the second. But my serve wasn’t really there today, so I have to work on that.

“But I finished with two aces there at the end, so I’m happy with that.”