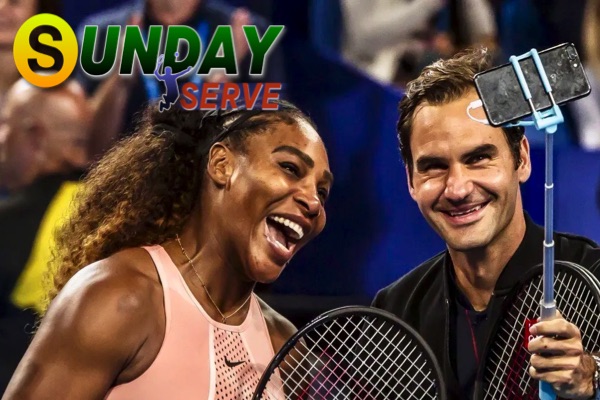 THE BBC in London ran an online story last week wondering if tennis would suffer as a result of the retirement of two if its greatest, Serena Williams and River Federer.

Speculating that TV audiences would drop, attendances at Grand Slams would drop and even maybe, participation would fall – the Devotion Drop – as one hack called it.

“These two players are irreplaceable. I don’t think there is any question about that,” John McEnroe, another tennis legend, said.

But are they irreplaceable? Really?

Williams and Federer were born 49 days apart – in very different circumstances – yet both rose to become icons of modern sport.

And both retired within days of each other.

Williams, who was 41 last week, and a 23-time Grand Slam singles champion, waved farewell at the US Open.

“It is going to be a big void to fill, no question,” Merrick Hayden, the managing director of international sports marketing agency Revolution, told the BBC.

“Some fans will stay with the game forever because tennis is like all sports: when you’re in it you’re in it.

“But there are going to be some who will drop away.”

Of course there will be … until the next one.

The period of ‘mourning’ for their heroes will last, until the new hero comes along.

And who best to state that case than Federer himself.

Spain’s Carlos Alcaraz is widely tipped to be the next superstar.

That journey began last month when he won the US Open.

He also became the first teenager to be ranked as the men’s world No.1.

In the women’s game Poland’s Iga Swiatek is already established as the new queen of the tour and there are others. Coco Gauff and even Emma Raducanu.

Each era of any sport has its own heroes and each and every generation supports them.

But what might be different in the tapirs decade of the 21st century will be the way they are marketed.

It’s not just what happens on the court or the sports field, it’s about lifestyle and social environment.

Williams and Federer brought tennis into the houses and on the TV screens of people who had previously probably never bothered too much about the sport.

Now, in a world of instant news, of social media driven marketing the kids on the block will have a very different set of rules to deal with.

No hiding place in today’s sporting celebrity world, to stay on top you not only have to win on court, you have to win on Twitter, TikTok, Instagram or Facebook.

So will the sport survive?

It has before and will again, and thrive, despite the 24-7 living in a goldfish bowl lifestyle players will have to adapt.

AUSSIE bad boy Nick Kyrgios just can’t keep his mouth shut sometimes, his latest unwarranted outburst was in Melbourne last week when he threw a fit because he couldn’t get a court to practice on at the Tennis Australia Academy in Melbourne.

“Here for a day of training in Melbourne and unable to get a court,” Kyrgios posted on social media.

“NOTHING HAS CHANGED. When are you going to start prioritising players????”

So he turns up unannounced, with doubles partner Thanasi Kokkinakis and expects to jump the queue?

His sense of self entitlement is the reason he divides the tennis community.

Oh, the difference between him and new world No.1 Carlos Alcaraz, the man he challenged yesterday to a big money match in Spain.

And then there’s Roger Federer – another total opposite to spoilt brat approach of Kyrgios.

ARGENTINE Juan Martin del Potro, who retired earlier this year through injury said this week he felt like he had been left “with nothing” after his knees could take no more.

“I can’t psychologically accept a life without tennis,” the 34-year-old said.

“I did not have a gradual transition to the after, I did not prepare, I have no idea what the other athletes did to live this process peacefully.

“I was No. 3 in the world, then suddenly I broke my knees and here I am, with nothing.”

Del Potro reached No. 3 in 2018, but his career spiralled with a series of knee and wrist injuries.

The toll of those injuries was revelled by del Potro in that interview.

He is unable to run, can’t climb stairs without pain and can’t drive for long without needing to stop to stretch his legs.

“Imagine what it’s like after every treatment attempt or surgery, the frustration I can feel when things don’t work out,” he said.

Qai Qai is her daughter Olympia’s doll and according to the publicity on the publisher’s website, the story is about a little girl who “learns to believe in herself with the help of her doll and best friend, Qai Qai.”

Our WTF moment this week happened in Orleans, France during the week when No.1 seed Corentin Moutet got involved in an on-court dispute that turned physical with Bulgarian Adrian Andreev.

Andreev had just upset Moutet in straight sets of the round of 16 match and the pair clashed at the end of the match, with the chair umpiring having to step in to separate them.

The fiery clash began when Andreev gave Moutet a hefty push, which was responded, words were said and the umpire stepped in.

Moutet afterwards said Andreev had threatened him with violence outside the arena after the match.

“He threatened me and asked me to wait for him when he left the court,” Moutet said.

“I showed up while he waited on the other side hidden behind six security guards.”