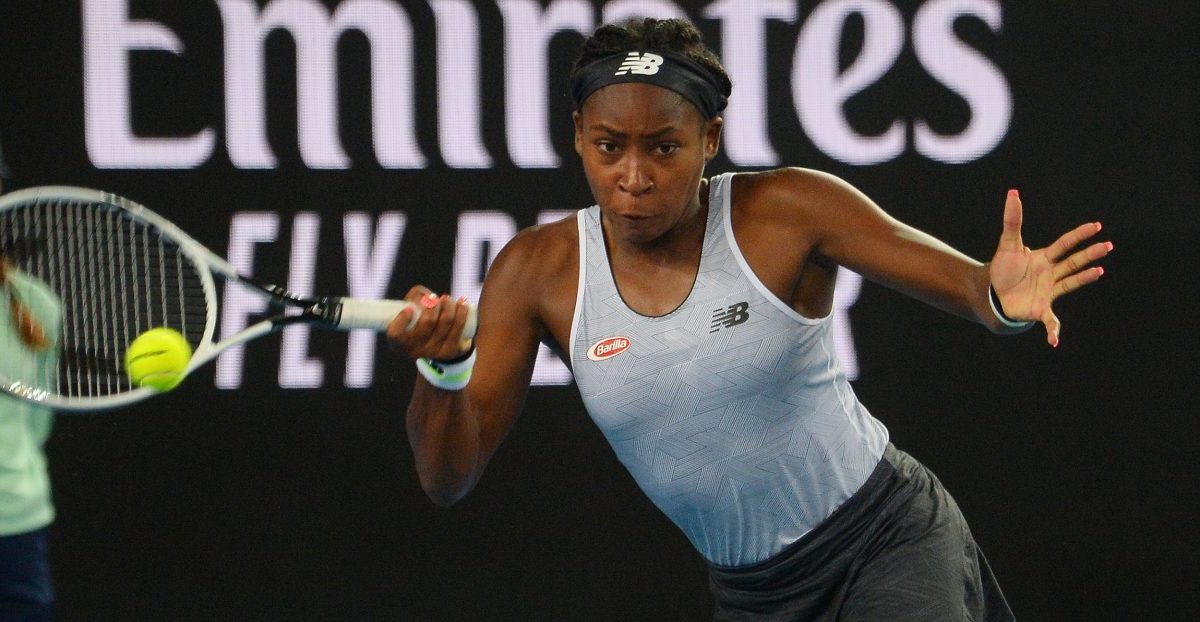 Bushfire smog was merely a memory with afternoon rain interrupting play on Monday as the Australian Open got underway with a convincing first-round win from holder Naomi Osaka.

The Japanese third seed who beat Serena Williams for the trophy here a year ago, got straight to business with a 6-3, 6-4 defeat of Czech Marie Bouzkova.
“I hope I’m still standing here at the end of this week,” was Osaka’s initial reaction after winning the last four games from 2-4 down as the first Grand Slam of the season got underway with crowds streaming in by their thousands.
“It was really tough for me trying to control my nerves, I was really glad to finish it in two.”
Osaka has now won 15 of her last 16 matches, a run of form dating back to last September.

“It’s really tough to play someone you’ve never played in the first round of a Grand Slam,” she said.

“I understand that I don’t have to play perfect in the first round. It’s more about building your level up and getting comfortable with yourself.
“That’s one of the biggest things I have learned.You have to understanding that every match you play is probably going to be very difficult.”
Seven-time champion Serena Williams, seeded eighth as she plays her 19th edition here, ended with an ace, beginning her campaign with the loss of just three games to 18-year-old Russia Anastasia Potapova.
But there was another loss for 39-year-old Venus Williams as she dropped  a Grand Slam first round for the second time in half a year to Coco Gauff.
.
The 15-year-old prodigy who also sent Williams out in the Wimbledon first round, had no hesitation about repeating the feat 7-6(5), 6-3 to start her 2020 year at the majors.
Williams went down early breaks in both sets, with Gauff winning the first in a tiebreaker and seeing off the veteran who turns 40 in June.
Gauff ran out a 5-2 lead in the second set as Williams faded, with the youngster advancing on a second match point in her first Melbourne appearance.
“It was difficult against Venus, she played really well,” the winner said. “i was nervous for the match.

“I was shocked when I saw the draw. I’m glad I was able to get through it.”

Serena has been unsuccessfully chasing a record 24th Grand Slam title for three years since winning her last major here in 2017, she made her Open debut in 2018, reaching the second round.
Williams advanced in 58 minutes with 24 winners including nine aces, winning five of six break points. She stands 73-1 in the first round of Grand Slams; she has never lost a first round here.
Williams beat an opponent 20 years her junior to claim her 350th victory at a major.
While refusing to pass a comment on the decision of her good Hollywood friend Meghan Markle and her husband Harry to step away from British royal life, Williams did not hesitate to speak of her match.
The 38-year-old came to the event after winning a title in Auckland, here first in three years.
“Its a monkey off my back, it was very important for me to get a win in the final. It felt like a relief, now I can move forward.
“I can still improve and get better throughout this tournament, for sure. This is a good stepping stone for right now.“
Serena’s best friend in tennis, 2018 Melbourne titleholder Caroline Wozniacki, who will retire when her run at Melbourne Park is done, extended her stay with a 6-1, 6-3 defeat of American Kristie Ahn:
“I’m leaving with no regrets at all because I’ve worked so hard my whole life, my whole career,” the former No. 1 Dane said.

“There’s a lot of just emotions, but I tried to keep them in check, and I thought I did that very well today.”
Seventh-seeded Petra Kvitova, who lost the final last year to Osaka,  imposed her indoor game under the roof on Czech compatriot Katerina Siniakov 6-1, 6-0.
Kvitova was pleased with her eight aces, which meant more money in aid of fire victims.
“The serve helped me a lot today. We are raising money for the aces, right? So I really tried.
“I like to play indoors. It was raining when I went to the court, I felt the wind was really coming before my match.

“For sure it’s better to play indoors than in really bad, windy conditions. We were lucky to play on the big (covered) court.”