One year on: where is Peng Shuai? 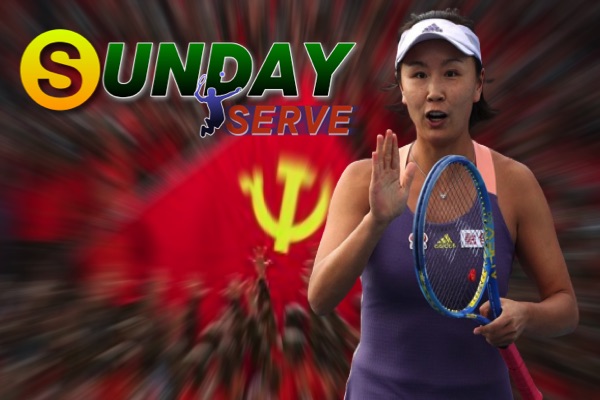 IT is a year since China’s Peng Shuai went public with her sexual assault allegations.

And a year on, we are still none the wiser as to the safety or even the whereabouts of the player.

Well, he’s been told that by unnamed Chinese officials.

Simon added the WTA had requested the opportunity to meet her in private tao discuss her allegations.

That request has been denied.

The WTA called for a formal investigation into the allegations. That has still not happened.

The WTA suspended all events in China in the wake of both the allegations and the subsequent cover-up by the corrupt Chinese Communist Party.

“The WTA continues to work towards a resolution and are hopeful we will be in a position to operate events in the region in 2023 and beyond but we will not compromise our founding principles in order to do so,” Simon said.

And the Mail’s esteemed tennis writer Mike Dickson last week wrote how much the ban has cost the WTA is sponsorship.

In Texas this week this winner is scheduled to receive $1.68 million.

And as if to rub it in, recently at the congress of the Chinese Communist Party, whoa should be sitting in the front row, as if nothin g had happened … Zhang Gaoli, the accused.

Peng Shuai has not been seen a disgraceful state stage-managed event at the winter Olympics, held in China back in February.

The decision to withdraw from. China in the wake of both the accusation and the cover-up was and is the right one for the WTA, even though it has hurt them financially.

But the question still remains … Where is Peng Shuai?

ONS Jabeur didn’t miss the opportunity to scare her rival Iga Swiatek in an interview preceding Halloween. Jabeur dressed as the Grim Reaper and surprised Swiatek from the back. Then, Jabeur shared a compilation of pictures of the moment on her Twitter account.

NICK Kyrgios has urged the Australian Open committee to revisit Novak Djokovic’s exclusion from the competition to allow him to compete at Melbourne Park next year.

But Kyrgios, for all his grandstanding, clearly has no understanding of the Australian immigration system.

The Australian Open committee has no legal power to overturn a decision of the immigration department to exclude Djokovic from visiting Australia for three years, because he breached immigration rules.

Neither does the State of Victoria – the matter lies solely with the Federal Government in Canberra.

Djokovic’s ban is standard procedure for any breach immigration – he lied on his forms and was unvaxxed trying to enter the country back in January.

JELENA Dokic picked up on the images coming out of Serbia last week of a 14-year-old player being assaulted by her father, likening the abuse to what she received at the hands of her own father, Damir, during her career.

Anti-violence advocate Igor Juric posted the video, sent to him by an unnamed source.

The incident is believed to have happened as a result of a poor training session.

Serbia’s Ministry of Internal Affairs said a Chinese citizen had been arrested over the incident.

Former World No. 4 Dokic, now a tennis commentator in Australia, said she believed this would not have been an isolated incident.

“I feel sick, I threw up and I am heartbroken after watching this.”

“I feel sick, I threw up and I am heartbroken after watching this,” Dokic posted on Instagram. “You think this is brutal?

“It is but it’s a normal day for a lot of us that have been or are abused especially as children. Hitting, ear pulling, spitting in our faces, throwing us on the ground, punching and kicking us. “Just another day for us and that includes this 14-year-old girl.

“I am glad this monster was caught on video but people are watching this and not doing anything until he started kicking her on the floor. Also, the media needs to do more.”

Halep was suspended after testing positive for the anti-anaemia drug Roxadustat last month, but has denied any knowledge of taking the drug.

“I believe her that she didn’t intentionally do something here,” Simon said lat week.

“That being said, I do believe very strongly in our anti-doping program, and I think it’s a good one, and our players support it, too.

“I have a lot of sympathy for Simona, because I would never question her integrity.”

MEANWHILE, World No. 1 Iga Swiatek has slammed the WTA over poor crowds at the WTA Finals in Texas last week.

When Swiatek took on Daria Kasatkina in her opening match, the 14,000 Dickies Arena in Fort Worth was almost empty.

American Jessica Pegula’s clash with Maria Sakkari began in an almost empty arena, with just a handful of spectators in attendance.

Fans and commentators were quick to condemn the “embarrassing’ scenes, with many pointing to a lack of marketing from the WTA and a very busy sporting schedule in the US at this time of year.

Sport in many countries, including the US and Australia, is very seasonal and November in Texas is football time of year- plus – the Houston Astros are playing in baseball’s World Series.

CORENTIN Moutet – remember him? Well, he has been dropped by the French Tennis Federation over his appalling behaviour this year, which included an on-court fight with an opponent at the Orleans Challenger.

The French Tennis Federation said: “Corentin Moutet’s behaviour on the court does not correspond to the values that the FFT wants to transmit.”

The 23-year-old was involved in an on-court fight with Adrian Andreev at the Open d’Orleans in France in September.

TENNIS legend Billie Jean King has waded into the ongoing Emma Raducanu coaching saga, advising her to hire a psychotherapist. As they say… Only in American is every problem solved by therapy.

“I think she needs to have space and time and talk to people she trusts,” King told Reuters.

“I would hope she has a psychotherapist, I think they’re very helpful in hearing yourself. I’ve been going forever. It really helped my life.”

King also advised Raducanu to only work with people she can rely on.

“I hope she gets people she can trust, who have no agenda. She needs to get away from people who have agendas,” she said.

“She needs to be herself and she’s very bright, actually very level-headed. I’m really impressed with her as a human being.”

BRITISH newspaper The Sun has nicknamed Emma Raducanu ‘Miss Moneypenny’ after she became the third highest-earning female athlete in 2022.

“I haven’t had so many calls from clients, major brands, who are interested in her (Raducanu) since Lewis Hamilton broke through in Formula One,” sports marketing expert Tim Crow told the London Guardian.

Grand Slam Tennis has reported this news, but we can’t fail to notice a more contrite side of Nick Kyrgios.

Kyrgios has apologised to a fan he accused of being “drunk out of her mind” during his loss in this year’s Wimbledon final and donated $35,000 to a charity of her choice.

Kyrgios complained to the umpire during his match against Novak Djokovic that the fan had been talking to him during points.

When asked to identify the fan, Kyrgios said: “The one with the dress, the one who looks like she’s had about 700 drinks, bro!”

Anna Palus, 32, is no ordinary fan, she’s a Polish born medical lawyer, and she said Kyrgios had defamed her by making “a reckless and entirely baseless allegation” and began legal action.

“I accept that belief was mistaken, and I apologise,” Kyrgios said in a statement.

“To make amends, I have donated 20,000 pounds to the Great Ormond Street Hospital Charity, a charity chosen by Ms Palus.”