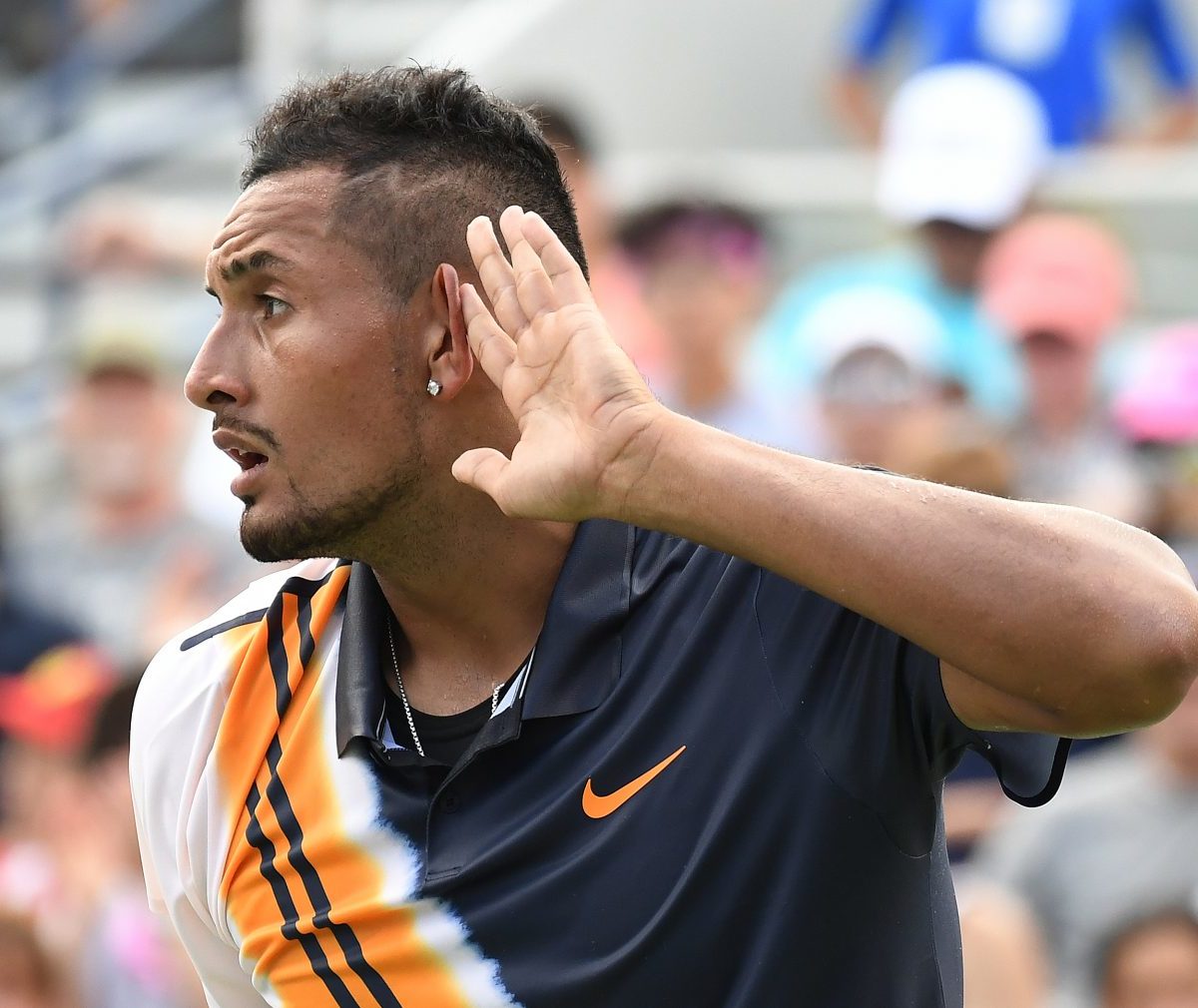 Nick Kyrgios was dumped out of Queen’s Club in London yesterday, but not before firing a shot at “poor umpires”  demanding that they should be stood down for poor performances.

The controversial Aussie, who displayed his full-range of tweeners and underarm serves, lost his second-round match  to  Canadian teenager Felix Auger-Aliassime 6-7 (4-7) 7-6 (7-3) 7-5.

The match was interrupted by some dubious line calls by officials followed by outrageous  rants from the world #39.

Inclement weather and rain forced both players  to play their first-round matches earlier in the day with Kyrgios defeating  Spaniard Roberto Carballes Baen.

In that match the Australian spent much  of his time rowing with experienced, mild-mannered chair umpire Fergus Murphy, followed by  sledging his opponent whenever he lost  a point.

Kyrgios, upset over a call he did not like, lampooned Murphy, a well-respected and long-serving ATP official, for everything from bad  judgement to poor taste in  headgear in another irrational display of temper and bile from the Donald Trump of tennis.

A contentious line call or two in both of the matches he played on a rain-make-up day, was all it took for the volatile bad boy to erupt again.

At one stage he even threatened to walk off court after accusing a line judge of fixing the match.

Kyrgios later stepped back on that claim, but didn’t hold back on the standard of officiating.

“I just don’t think, at this level of sport, that we should have line judges and umpires that aren’t making the right decisions,” Kyrgios said.

“And I know what happens. Nothing happens. They get a little slap on the wrist. I had a conversation with them in Miami after I got fined again for their mistake.

“You know, they don’t get any warning or fine or anything for their mistakes. So what’s the difference?“

Kyrgios was angered in the Auger-Aliassime match when he lost a point  when a ball wasn’t called out, this time by British umpire James Keothavong.

Kyrgios was given  a code violation warning  for smashing a ball out of the court, and then launched a verbal attack on a photographer who he objected snapping him while he was blowing his nose at a changeover.

“I thought some of the calls were outrageous today,” he said.

“It shouldn’t have to come down to me and Felix giving each other points.

“For me doing a code violation, why can’t they get fined for having a terrible day in the chair? I think it’s ridiculous. Like, why not have another umpire ready to come in if that guy’s have a terrible day?”

“There’s hundreds of thousands of dollars on the line. It’s not a joke”

“They just think it’s a joke because nothing happens to them after the match. They don’t get any investigation or anything.

As a result he now stands on the brink of yet another hefty disciplinary fine after his rant-filled day on the grass of Queen’s.

According to calculations by London’s Times, Kyrgios has been fined a total of $190,000 over his ATP career while going through several suspensions for lack of effort and other misdemeanours on court. At this same event last year he was fined £13,000  for making suggestive gestures with a water bottle during his semi-final defeat.

The Australian who rubbished the French Open clay and skipped the event with “injury,” had been expected to buckle down a bit on the grass – which he proclaimed last month was his all-time favourite surface.