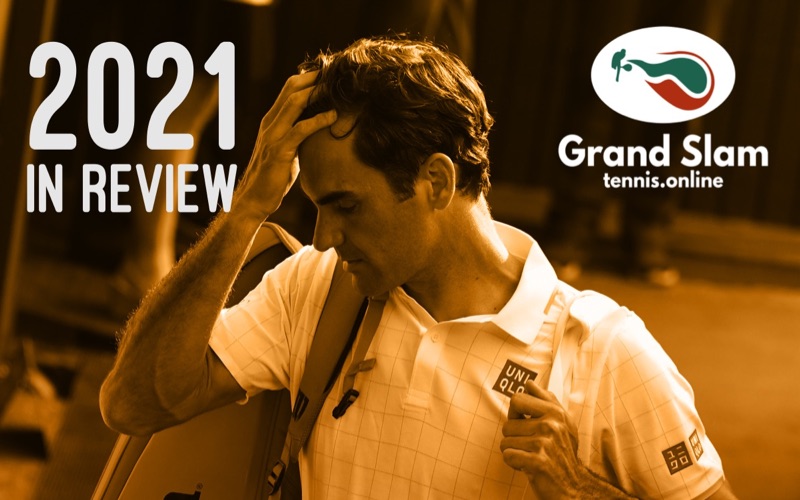 Grand Slam Publisher Roger Parker has covered all the Slams for 40-plus years. Here’s how take on 2021…

Despite Novak Djokovic’s failure at the last hurdle to complete the elusive season Grand Slam in the Men’s Singles, the 2021 US Open still produced the most remarkable tennis story ever and was the best slam of the year for me.

She had never played a three set match at tour level.

She had not even won a WTA tour event match.

Yet she won the US Open, as a qualifier, and without dropping a set.

Totally unprecedented. Never to be repeated.

No question about it – Novak Djokovic.

Despite his end of season meltdown starting with a semi-final loss to Alexander Zverev in the Summer Olympics in Tokyo putting paid to his chance of the “Golden Slam” and a straight sets loss to Daniil Medvedev in the US Open Final, he still became only the second man to achieve a same year “surface slam” winning majors on clay, grass and hard court.

Added to that he overtook Roger Federer’s “unbeatable” record of 310 weeks as World No. 1, achieved his 6th year end no.1 finish and chalked up his 36th Masters 1000 title.

He is now tied with Roger Federer and Rafa Nadal on 20 singles titles and will probably take the lead, unopposed, in 2022.

Despite playing only thirteen singles tournaments in 2021 due partly to her government’s overly aggressive border protection regime in response to COVID, Ash Barty easily held on to her WTA No. 1 spot throughout the year.

In doing so, Barty became the second Australian WTA year end Singles No. 1 after her heroine and fellow indigenous Aussie Evonne Goolagong Cawley.

She has remained there for 95 consecutive weeks.

Having terminated her 2021 campaign after a disappointing third round loss to Shelby Rogers in the US Open, Barty returned home and announced her engagement to trainee golf pro Garry Kissick in November to cap another memorable year for the Queenslander.

This has to be match point in Emma Raducanu’s fairytale in New York as she won the US Open Women’s singles title having started the event as qualifier.

Her winning smile, aggressive style of play and confident domination of Leylah Fernandez in the final was a joy to watch, especially for the Brits.

Instagram self-publicising postings by “media shy” Naomi Osaka since pulling out of Roland Garros rather than attending an obligatory WTA post match press conference and ending her season after US Open.

Best quote(s) of the year

I am awarding a bonus point to my colleague Peter Rowe for working into the subsequent ATP rules change story with “Bathroom breaks down the pan”.

A more cerebral contribution comes from a player who rose from an ATP ranking of 65 in 2018 to the current World No. 2, Daniil Medvedev.

Described by some as a “part time philosopher, full time tennis player” the Russian is in a league of his own with his post match interviews and expresses his inner thoughts with wit and sarcasm in true Eric Cantona style.

At a press conference after the Manchester United footballer’s court trial in the UK after dropping a Kung Fu kick on a mouthy Crystal Palace supporter who had questioned his birthright the world’s quote hungry journalists were treated to:

“When ze seagulls follow ze trawler it is because zay think sardines will be thrown into the sea”.

In 2021 Daniil treated his public, and the media at large to the following statements …

During his match against Frenchman Hugo Gaston at the Paris Masters in Bercy in November, Medvedev was booed, even in mid-serve, by the partisan local crowd.

During a changeover he was heard to rant on on live TV about the crowd to the match referee:

“I think it is easier to enjoy life when you have no brain, because then you don’t think, you just scream. No matter if the guy is serving or not, you just scream. And you enjoy life. I wonder what it is. I want to see how it is inside because I have no idea”

Unfortunately for us photographers, Medvedev is not known for extrovert post victory celebrations like some of his contemporaries but after his straight sets win over Novak Djokovic in the US Open Final, the keen video game player performed a strange victory celebration.

During the awards ceremony, he explained in his winner’s speech by saying: “Only legends will understand, but my celebration was L2 + Left.”

Those are the controls for the “dead fish” celebration on the FIFA video game after a player scores a goal.

Winning his first Grand Slam at the US Open was the moment for chess master Medvedev to finally celebrate – and he chose to play a move from the FIFA21 video game!

His final quotable quote of the 2021 season came after Russian Tennis Federation’s Davis Cup victory in Madrid in December.

Not for the first time he had been booed by the home Spanish fans during his match winning rubber, presumably because he had helped eliminate holders Spain at the round robin stage.

In his victory speech, he had the temerity to tell the Spanish fans where their game plan had gone wrong.

Best picture of the year

Because of the effect of the Pandemic on travel protocols worldwide and drastic reduction in numbers of media permitted on-site due to social distancing in 2021, I was only permitted to cover Roland Garros and Wimbledon this year.

For my “Picture of the Year” nomination, rather than my usual aspiration for an acrobatic, perfectly lit shot of a player makIng a winning dive volley return at the net, my best picture of the year didn’t depend on luck but forethought and anticipation.

When Roger Federer played Hubert Hurkacz in the fourth round at Wimbledon, I had a hunch that an out of form Federer might succumb to the improving Pole and began to wonder if this could be the last ever Wimbledon appearance for the eight times champion, due to the surgery he had already had, and unbeknown to myself at the time, more to come, putting his playing future in doubt.

The photographer’s working positions at Wimbledon, as with all the other Slams, are strictly controlled, and there was only one spot to capture his exit from public view and into the locker room, possibly for the last time.

After the players disappear from Centre Court, with their match worn accoutrements and a nod to the Royal Box should there be a Royal in attendance, and signing a few autographs they walk behind a green Slazenger canvas screen concealing remote television cameras and their operators and a last half a dozen steps to an open door which leads into the privacy of the locker room.

I needed to get myself into that position early so moved into “Pole” position (pardon the pun) on “Platform B” a ITV camera position many years previously, before the start of the second set, and waited.

I had mixed feelings when my prediction came true.

Federer was bagelled 6-0 in the third set by Hurkacz for the first time ever in SW19 after 119 matches there. I recorded a sad looking Federer disappearing into the locker room.

Only time will tell if this was his last Wimbledon appearance, maybe even his last ever Grand Slam appearance.

It was certainly his last match in his thirties, if he does ever return, he will be in his forties.

Underperformance of the Year (player)

After promising so much in 2020 and winning his maiden slam the US Open and reaching a career high No. 3 ATP ranking Dominic Thiem has had a 2021 season to forget for himself and his fans.

He finished the 2021 season ranked 15th following a wrist injury picked up in June at the Mallorca Open which meant he was unable to play Wimbledon or defend his US Open title.

He spent months without picking up a racket and now needs to push the mental reset button to have any hopes of challenging the Big 3 in 2022.

For her third mention in this years “Honours List” it’s Emma Raducanu.

Firstly she qualified for Wimbledon and reached the fourth round which would in itself have earned this accolade.

Little did we know there was even more to come in New York, on and off court.

Will she be able to consolidate in 2022, her first full year on the WTA tour?

Carlos Alcaraz has so far fulfilled his “Baby Rafa” tag by winning the 2021 Next Gen ATP finals in Milan to cap a remarkable breakthrough season and will certainly look to improve on that in 2022.

He catapulted himself into the Top 50 and became the youngest player since 1992 to finish a year with 32 Tour level victories.

The veins of his defeated opponent in the final Sebi Korda are coursing with sporting heritage.

His father Petr Korda won the Australian Open in 1996 and reached No. 2 in the rankings.

His mother Regina was also a tennis player, reaching 26th in the world and representing Czechoslovakia in the 1988 Seoul Olympics before the couple moved to Florida and became US Citizens.

Sibling Nelly is the No. 2 LPGA golfer with three tour wins and with other sister Jessica went undefeated in the Solheim Cup at Gleneagles in 2019.

On the Men’s side 18-year-old Holger Vitus Nodskov Rune who’s name is too long for most scoreboards, made it to a ranking of 103 in his first full year on the ATP Tour.

His Danish compatriot and also a junior champion Clara Tauson has risen to No. 44 on the WTA chart and is looking to emulate the feats of former World No. 1 Dane Caroline Wozniacki who retired in January 2020.